2014 Northeast Regional Conference was a Success!

2014 Northeast Regional Conference was a Success!

On Saturday, March 29th, dozens of SSDP students, supporters, and alumni gathered at West Chester University in Pennsylvania for the 2014 SSDP Northeast Regional Conference! The event was a huge success, with roughly 80 students and experts in drug policy reform joining together for an unforgettable day packed full of drug policy oriented events. Many of the events themselves were so packed that there was only room left to stand! 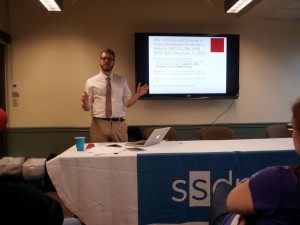 After a light breakfast to kick-start the day, conference attendees gathered as Will Creeley, Director of Legal and Public Advocacy at The Foundation for Individual Rights in Education, gave his Keynote Address. Creeley’s address was entitled, “The Freedom of Consciousness: Fighting Back on Campus,” and he discussed ideas surrounding freedom of consciousness, and why it is important to protect and advocate it while attending college. As SSDPers know all too well, many college campuses do not recognize this freedom, and instead adopt policies that negatively impact those who choose to exercise it. The Keynote Address was followed by discussion panels that continued to highlight the importance of adopting sensible drug policies. The first panel of the morning was called, “Preventing Overdose: Passing Policies That Save Lives.” This panel discussion focused on alternative approaches to drug prohibition that accept the reality that there will always be drug users. The panel discussed how drug related issues would best be addressed through public health based approaches rather than law-enforcement based prohibition. The panel highlighted many ongoing local, statewide, and national efforts (often led by SSDPers!) to prevent drug and alcohol overdose , and to choose safety over punishment. 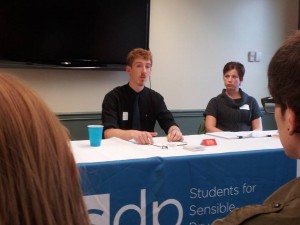 The morning’s second panel discussion built off of the theme of the first panel, as activists in the live music community led an important discussion entitled, “Embracing Harm Reduction in the Live Music Community: Saving Lives Through Evidence Based Solutions.” The panel speakers included members from the Drug Policy Alliance, as well as SSDP’s AMPLIFY Project, and they discussed their experience with harm reduction, why they promote harm reduction, and most importantly how you can get involved in promoting harm reduction in your local music and nightlife community. Be sure to go to ssdp.org/amplify and check out the AMPLIFY Facebook Page for more information about AMPLIFY’s plans for 2014! After a short break for lunch, the conference resumed in full swing with a panel discussion on the future of marijuana legalization in the Northeast. This panel focused on the increased attention that states and localities have been giving to marijuana policy reform since Colorado and Washington became the first states to legalize, tax, and regulate cannabis in 2012. As key Northeastern states such as Rhode Island, Massachusetts, and New York consider their own legalization bills, it is crucial that SSDP and the rest of the drug policy reform community remains active and involved in the Northeast throughout the coming years. The next panel was entitled, “Who Will Watch the Watchmen?: Holding Officers Accountable During a Police Encounter.” As the title indicates, this panel focused on an existing issue that stems from our current law enforcement based policies of prohibition. Prohibition has led to an enormous erosion of respect for law enforcement, and this is likely because drugs have been used to justify otherwise illegal searches as well as violent and disrespectful acts carried out by law enforcement officials. The panel discussed how we can work to hold officers accountable for wrongdoings, and it considered how drug policy reformers may work to ensure that future policies do not give rise to similar situations in the law enforcement profession. The final panel before the event’s Closing Address was called, “Connecting the Dots: From Activist to Entrepreneur.” As we graduate college and pass our SSDP chapter leadership down to the next generation of activists, we are all faced with the big question about what to do next. Thankfully, as this panel highlighted, there are more opportunities to continue working in the drug policy reform movement today than there has ever been before. SSDP provides each of us with the largest, most diverse, and most unique network of students, professionals, and alumni, who all share the common goal of ending drug prohibition and replacing it with sensible drug policy. This panel of experts explained how SSDPers can use their activism and involvement in drug policy reform to market themselves to future employers in both the public and private sectors. 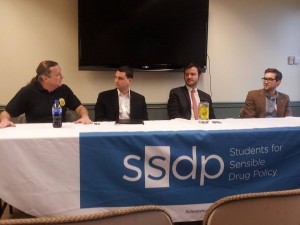 The Closing Address for the conference was given by Peter Christ, co-founder of Law Enforcement Against Prohibition (LEAP). LEAP represents a powerful voice in the movement to reform drug policy, as their call for reform comes from those who were once responsible for enforcing the status quo of prohibition. Christ was a crowd favorite, and his ability to drive home the overarching message of the day made for an outstanding close. Two more Regional Conferences will take place in 2014, and our 2014 International Conference and Lobby Day will be held in September. The Mid-Atlantic Regional Conference will be held April 18th-20th at the Virginia Commonwealth University in Richmond, and the Midwest Regional Conference will take place at Northwestern University in Illinois on April 11th-13th. Be sure to visit the ssdp.org/events to stay up to date and learn more about conferences and other SSDP events!