Category: Blog/Event | April 30, 2015 By Drew Stromberg No comments yet

This semester, we hosted five regional conferences; in our Pacific, Mid-Atlantic, Midwest, Northeast, and Southeast regions. In addition, our Irish SSDP chapter network held their 2nd annual regional conference in Dublin!   Pacific The 2015 SSDP Pacific Regional Conference was held on March 14-15th at California State University Fullerton. Students, alumni, and allies from across the Pacific region convened in Orange County for the conference. Professor Alex Kreit of the Thomas Jefferson School of Law  started the conference off with a fantastic session in which he praised the progress we have made so far on marijuana reform, but cautioned that until prohibition is completely ended, the “war on drugs” will still exist in some capacity. His session was followed by a panel entitled Learning from Measures in the Past, featuring several experts who worked on past ballot initiatives in both California and Oregon. One of the more common discussion points during the panel was the need for change and flexibility throughout the ballot process and the importance of coming to a consensus with allies.

The next panel, Student’s Role in Legalization, was comprised  of SSDP chapter leaders, staff, and other student activists. Panelists discussed strategies for getting  students motivated on campus, how to encourage meaningful  participation in the political process, and how to keep people motivated and moving forward towards the next challenge, even after major victories.     Mid-Atlantic 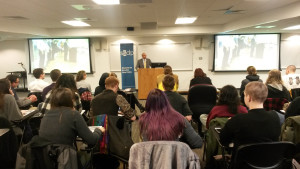 Next up was the Mid-Atlantic Regional Conference, held at George Washington University in Washington DC. A total of 75 students from 19 different chapters assembled  in the nation’s capitol  for a conference that highlighted the successful Initiative 71 campaign to legalize marijuana in the nation’s capital while also advising students about what they can be focusing on now. Students were treated to  two fantastic speakers: Neill Franklin of Law Enforcement Against Prohibition, and SSDP Board of Trustees member Eric Sterling of the Criminal Justice Policy Foundation. Major Franklin started off the day with a fantastic session titled Drugs vs Policy: The Solid Argument, in which he broke down the stigma of distinguishing between “good” drugs and “bad” drugs, making the argument that there is no such distinction when talking about drug policy, and that in order to end the “war on drugs,” prohibition will have to completely disappear for all drugs. 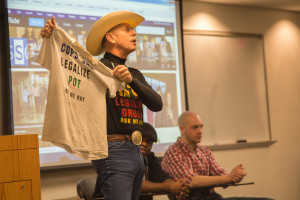 Neill was followed by a panel entitled Legalizing Marijuana in the Nation’s Capitol, which consisted of several key figures  from DC’s Initiative 71 campaign. LEAP co-founder Howard Wooldridge, DPA policy director Malik Burnett, and former SSDP Campus Coordinator Garrett Reuscher spoke about student involvement  in the campaign, and how students and young people can and should continue to be involved in future campaigns. During the next panel on Nightlife and Harm Reduction, VCU SSDP alumni Kyle Hughes conducted a drug checking demonstration, which was followed by a powerful and moving personal story by Amend the RAVE Act founder Dede Goldsmith, who spoke about her daughter Shelley’s death and why she fights for better harm reduction policy. The conference was rounded out by Mr. Sterling, who gave an entertaining lecture entitled If Your Heart is In It, the Sky’s the Limit.   Ireland For the second year in a row, the Irish SSDP chapters hosted and organized a national conference. This year’s conference was hosted by the Dublin City University (DCU) chapter in the capital city of Dublin, and featured several prominent speakers both from Ireland and throughout Europe. Some of the most well received speakers included John Wilson, former Garda who is noted for blowing the whistle on widespread corruption within Ireland’s national police force, Mark Fitzsimmons, a blind cannabis activist, Karl Gill, an elected member of the county council in Dublin, and Dr. John Collins, the project coordinator of the LSE IDEAS International Drug Policy Project at the London School of Economics. In addition, a statement from Senator James Heffernan, who was scheduled to speak but had a last-minute time commitment, was read out loud. Student speakers included DCU SSDP president Dan Kirby and National University of Ireland, Galway SSDP president Ciarán Maher. In total, 60 students from 3 different Irish chapters attended the conference.   Midwest The next conference took SSDP to the upper midwest from April 3rd-5th, where the University of Michigan undergraduate and law school chapters collaborated to host the 2015 Midwest Regional Conference. Approximately 85 Students from 21 different  chapters in 6 states attended the conference.

Pam Lynch from MiWhoSoEver started the conference off with a Naloxone training workshop where conference attendees were trained on how to recognize an opiate/opioid overdose and how to respond to it by administering Naloxone to the overdose victim. Ms. Lynch also provided conference attendees with free Naloxone kits to take back to campus with them and educated the crowd on how to advocate for the implementation of  legal naloxone distribution programs.  Criminal defense attorneys Elizabeth Young and Matt Stattman next led an outstanding and exceptionally informative Know Your Rights seminar. On Sunday, the conference shifted towards current drug war policies and how they negatively impact our society. Charmie Gholson from Michigan Moms United to End the War on Drugs and Thomas Lavigne J.D. discussed  the ways in which current Michigan laws surrounding drugs are a direct threat the security and stability of families and children. Concurrently, another panel titled America’s Opiate Problem featured Washtenaw County Sheriff Derek Jackson, harm reduction professional Lamont Gore, and physician/toxicologist Dr. Davis Peters. The panel was  moderated by SSDP alumnus James Kowlasky and was a very robust discussion about the need for policy makers and citizens alike to rethink the way we deal with the public health epidemic that opiates have become in our society. 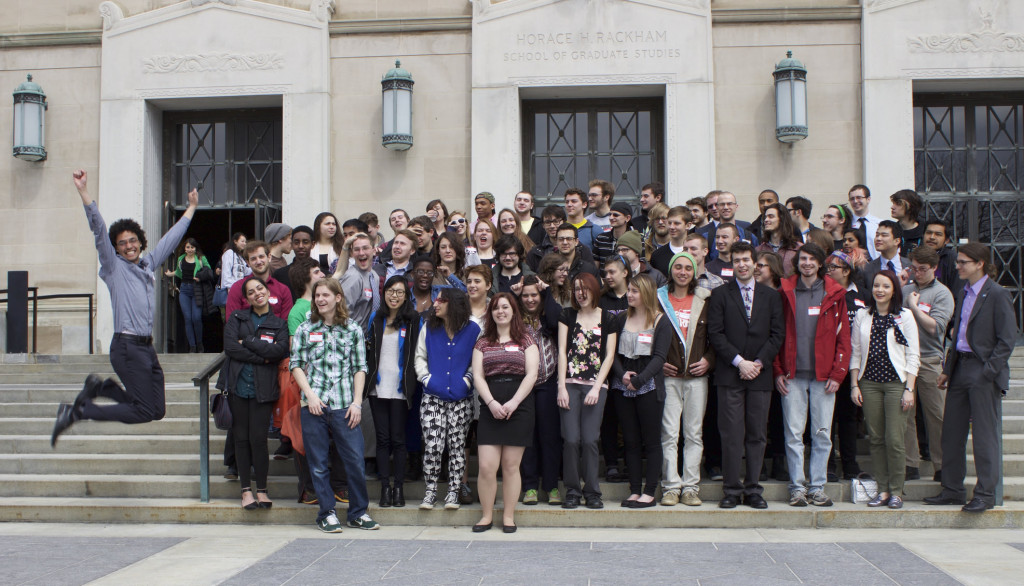 Afternoon panels included a discussion about pharmaceutical drug policy, an Art & activism and Zine-making workshop led by SSDP alumnus Katie Parks, and a discussion about addiction with Former United Stated Deputy “Drug Czar” Dr. John Vereen and Dr. James Morrow. The final session of the day featured University of Michigan Law School Professor Howard Bromberg and criminal defense attorney David Rudoi, who is at the forefront of medical marijuana cases currently in the Michigan State supreme Court.   Northeast The Northeast Regional Conference was held at University of Connecticut from April 11 to April 12. A total of 94 students from 10 different SSDP chapters gathered in Storrs, Connecticut for a conference that focused on coalition building and intersectionality. LEAP co-founder Jack Cole started the first day off with a fantastic keynote, LEAP into the Revolution: End Prohibition. In it, he presented several detailed statistics and points that prove prohibition has not only failed to reduce drug addiction and overdose deaths, but has lead to mass incarceration and violence both in the US and throughout Mexico. Next up was a panel titled Cannabias: Combating Sexism in Advocacy and the Industry, organized by SUNY New Paltz chapter leader Rachel Wissner. The panelists discussed the prevalence of  sexism in both the drug policy activists circles and the emerging legal cannabis industry, and how students can work toward creating a more ethical and inclusive industry. 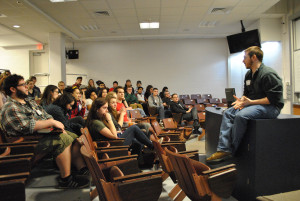 A panel on careers in the Cannabis industry rounded out the first day, featuring several SSDP alumni and other successful players in the industry. The second day of the conference led with a fantastic keynote from former SSDP Executive Director Kris Krane, now of 4Front Advisors. He began by speaking a bit about the history of SSDP and expressed his excitement over how much it has grown since its founding in 1998. He then talked about the future and how important student involvement will be for the elections in 2016 and beyond. Mr. Krane’s keynote was followed by two breakout sessions that students chose from; lobbying and bill-making, led by former UConn chapter leader and Board chair Sam Tracy, and compelling content creation, which  focused on how students could use campus media and the internet to build their voice. The conference closed with a panel on Intersectionality, focusing on how policy change should be advocated for  with race and gender in mind.   Southeast The final conference of the 2015 Spring semester was hosted by the College of Charleston chapter in Charleston, SC April 18th-19th and was attended by members of 8 SSDP chapters from 4 states. Southeastern SSDPers had the opportunity to hear from SSDP Executive Director Betty Aldworth and SSDP Board Chair Amanda Muller. Betty spoke to students about her vision for the future of SSDP. Amanda joined Robert Childs, Executive Director of the North Carolina Harm Reduction Coalition on a Naloxone training and overdose reversal workshop. 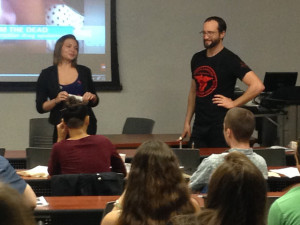 After that, both Amanda and Robert led the group in a strategy session on how to pursue drug policy reform at the State level in the south. After lunch, Greg Newburn, State Policy Director for Families Against Mandatory Minimums (FAMM), spoke to the group about the work FAMM does to chip away at unjust drug war sentencing practices at the local, State and federal levels. Mr. Newburn gave very sage advice about how to navigate working with folks from all different perspectives to achieve meaningful reforms. CofC Sociology Professor Heath Hoffman, spoke about the ways in which a sociological analysis can reveal myths and common misconceptions about drug use. Sunday featured local activist Colin Ross, SSDP Board chair Amanda Muller, and SSDP Board member Jeremy Sharp to discuss the landscape of southern policy change. Raeford Davis of LEAP, formerly a police officer with the North Charleston Police Department, joined University of Florida chapter leader Chris Cassada to talk about the militarization of police forces at the campus and community levels. The afternoon was closed out by Dr. Mithoeffer, a clinical psychiatrist at CofC who presented about his experiences doing research with MDMA as a treatment for PTSD symptoms was the most popular event of the conference. 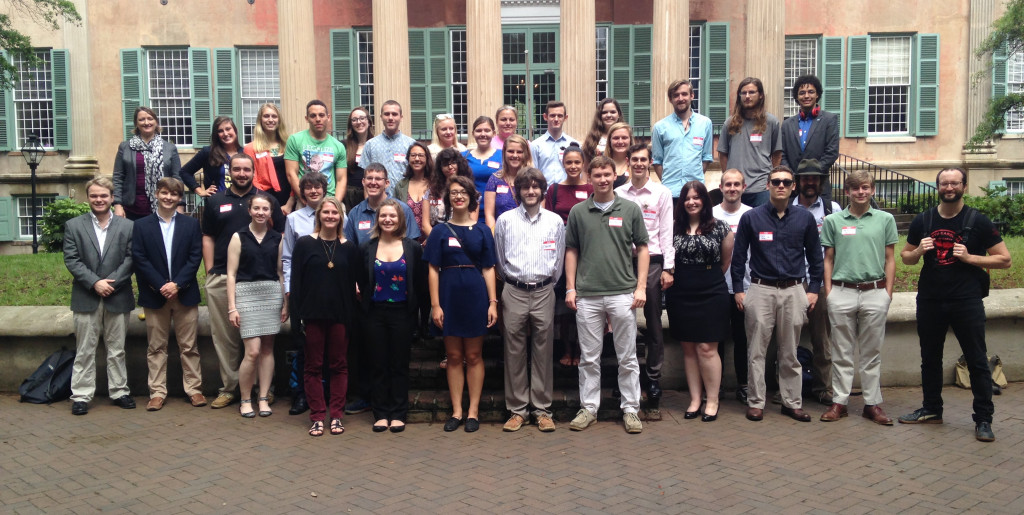 The 2015 SSDP Spring regional conferences were a rousing success! We brought together hundreds of student from dozens of chapters in dozens of states. Stay tuned for information from the SSDP staff about details for next year’s conferences!