HomeUncategorized A Look Back at 2018 in Global Drug Policy 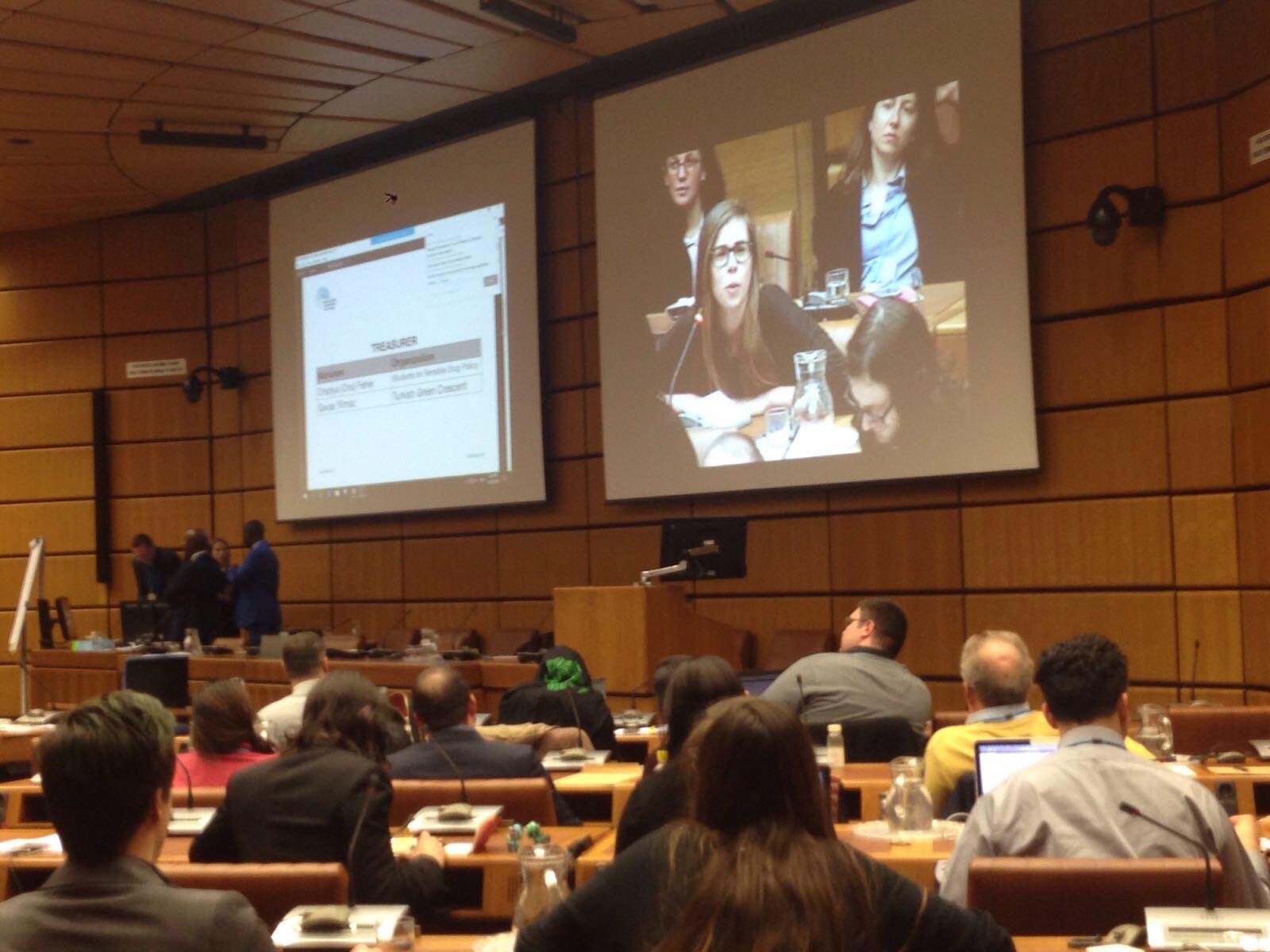 Category: Uncategorized | January 29, 2019 By Jake Agliata No comments yet

The Commission on Narcotic Drugs (CND) is one of the three bodies assigned roles by the global drug control conventions, along with the International Narcotics Control Board (INCB), and the World Health Organization (WHO). CND is the central drug policy decision making body within the United Nations system and can vote to amend the Schedule of controlled substances.

SSDP holds a consultative status with the UN Economic and Social Council (EcoSoc), and we have been scaling up our presence at drug related meetings in Vienna this season. SSDP Austria’s Elena Janeva ‘17 was selected to consult the INCB on the “Use of Cannabis for Medical and Non-Medical Purposes” in May, the first time they held a civil society hearing on cannabis regulation. I made an intervention from the floor in October during thematic discussions discussing preparations for the 2019 High Level Ministerial Segment (more on that later), delivered a statement on behalf of the Vienna NGO Committee on Drugs (VNGOC) at the INCB’s 50th anniversary meeting, and met the representatives of the Office of the High Commissioner for Human Rights (OHCHR) in December.

It has been a busy year at the UN and here are the essentials you need to know about the state of the global drug policy debate.

Following the annual conference in March 2018, the Commission met again in June to start preparing for 2019 where a High Level Ministerial Segment will held in Vienna a week before the next annual CND conference. The picture is rather vague in terms of exactly what is to be expected at the segment, but member states agreed on high-level thematic roundtables and a Civil Society Forum as means to foster NGO engagement in these crucial discussions, which is good news. They also agreed on not wanting another policy paper as an outcome of the Segment, which sounds reasonable as there is still debate on the previous three and their implementation, but more on that later.

The conversation about 2019 was an essential part of all intersessional meetings, although they also included thematic discussions regarding the UNGASS outcome document. Each chapter of the document from the 2016 UN General Assembly Special Session on Drugs (UNGASS) has enjoyed a dedicated session from September to November. These debates have truly been as interactive as it gets at CND; countries and various UN agencies nominated expert panelists and the VNGOC (the body which coordinates civil society participation at CND) nominated one panelist from a member NGO for each day and was able to submit additional interventions from the floor. These interventions did not enjoy priority or got any noticeable attention. For example, China’s representative interrupted the rep from Amnesty International at one point which is unprecedented behavior. He also asked one of the NGO panelists if she was a drug user.

When talking with veteran UN civil society advocates, we grew to really appreciate any small recognition of our work. During one of the sessions, Panagiotis Sevris ‘17 (SSDP Austria) and myself were invited for an informal meeting with the delegation of Singapore who seem to be struggling with engaging young adults in their zero-tolerance prevention services. Among other things, we tried to explain that calling any drug user an abuser and encouraging young people to cut ties with their peers who use drugs is a dangerous move and leads them to, according even to their own national statistics, distrust national prevention programmes once they learn to think for themselves or can pay for internet.

The discussions about 2019 preparations started a day after the UNODC launched their World Drug Report for 2018. The report painted a rather disappointing picture in the face of the goals set out in the 2009 Political Declaration and Action Plan ‘to eliminate or reduce significantly and measurably’ illicit drug supply and demand, the diversion and trafficking of precursors, and money laundering. The target date for a drug-free world was set as 2019 and in a resolution not so long ago, member states decided that the Ministerial Segment will be the moment ‘to take stock of the implementation of the commitments made to jointly address and counter the world drug problem’.

Although there was no formal review process on the progress of the Commission’s work towards the 2009 goals (though check out the shadow report from IDPC to see the state of the World Drug Problem), there is a clear divide amongst governments who still see these goals as necessary ideals to guide the global drug control regime and those member states that foster a more progressive approach to dealing with drug-related problems. So on the one side, we have countries such as Russia, Pakistan, or China who think the “drug-free” goals should be extended and further pursued despite evidence that this strategy proved unsuccessful in the past. On the other side, there are countries such as Canada, Bolivia, and Jamaica who think extreme punitive responses result in human rights violations, pose additional risks to already vulnerable populations, and apply counterproductive measures. The latter category of member states have made some effort in communicating their stances and have fostered a livelier conversation with civil society organizations than states at the other end.

This ideological divide expresses itself at CND in the debate over which policy paper enjoys more importance. We have the 2009 document with the drug-free goals and we have the 2016 document which “represents the latest global consensus”, pushes for the respect of human rights, underlines societal issues, recognizes gender issues, and proportionality of sentencing. The 2016 document really broadens out the 2009 discussion, but if you were to read it, you would be disappointed how it still doesn’t go far enough to really actually put humans and their well-being in focus.

Towards December, when the Reconvened CND session was to take place, we started hearing member states pushing for a one-track approach. It was not made clear what this means, but it seems that the Commission was able to come to an understanding that these two policy papers are “mutually reinforcing” and the blueprint for beyond 2019 will have to rely on both.

The member states have also enthusiastically reiterated their commitments to the three drug control conventions, although an interesting and emotional debate has sparked on the occasion of Canada’s decision to legalize cannabis this year. Russia, enjoying support from like-minded countries such as Egypt, Pakistan, and Singapore, called Canada a ‘trojan horse’ and indicated CND membership should be dependent on compliance with the conventions. The Canadian Ambassador had made a detailed statement on the reasons and process for legalization, and were supported by New Zealand among a handful of other countries who took the floor to smooth out the very apparent tensions on this topic. The “Vienna spirit” has been mentioned a lot – this is essentially a gentlemen’s agreement for members to respect each other and not call out each other on irrelevant topics. Some pushback arose over the idea member states can’t pick and choose which elements of the conventions to enforce. Although human rights are not explicitly mentioned in the treaties, the president of INCB stressed that respect for them is as important as the schedule system. Canada also contended the prohibitive approach has only expanded their problems, and that it is their sovereign right to keep their citizens safe above all else as stated in the treaties.

At the reconvened CND session this December we witnessed meetings which were shorter than usual and mostly technical in nature, probably owing to the fact that the Chair has arranged extensive informal meetings and the regional groups of countries have debated amongst themselves outside of the CND plenary. The most notable moments in December came when the WHO announced that they will not be doing any announcement regarding Cannabis (to the audible dismay of civil society members present) while some conservative countries (Egypt and Pakistan for example) have demanded the Tramadol scheduling to be streamlined. As the meeting came to a close, the election of the new Chair, Vice Chairs, and Rapporteur extended the time. The USA has made some questionable remarks when they refused to participate in any meetings chaired by Iran, sparking a debate among member states about the USA’s role in regional stability around the globe.

To sum up what to expect at the coming 62nd session from March 18-22; some believe the outcome document of the High Level Ministerial Segment and the following CND session will dictate the next decade of policy. This gives us a chance to have our voices heard and promote harm reduction as there is still not explicit mention of harm reduction in any official document at the UN, despite constant promotion by the WHO. Our youth delegation at CND have already submitted a written statement, and is preparing for a side event and an intervention from the floor.

Stay tuned for the rest of the ridiculous and high-stakes UN shenanigans!

If you would like to know about the priority issues for our advocacy work at the UN, take a look at the Paradigma Asks we have worked on with other youth-led organizations or reach out to Orsi (orsi@ssdp.org) or Jake (jake@ssdp.org).