HomeBlog News A Report on Student Participation at the Annual Meeting of the United Nations Commission on Narcotic Drugs, Vienna, March 2014

A Report on Student Participation at the Annual Meeting of the United Nations Commission on Narcotic Drugs, Vienna, March 2014

A Report on Student Participation at the Annual Meeting of the United Nations Commission on Narcotic Drugs, Vienna, March 2014

A delegation of seven students from SSDP disembarked into a wind whipping the city of Vienna eagerly anticipating participating in the 57th session of the United Nations Commission on Narcotic Drugs. We were privileged to be representing our Irish, Canadian and United Kingdom student networks, and all the nations which are part of the SSDP International Outreach Committee. We discovered an astonishing collaboration across a diverse range of perspectives during the various events held during the Commission’s meetings. Here is my short report.

We were thrilled on the opening day to witness what amounted to a race between the Organization of American States and the European Union to demand drug policy reform at the conference. A report was released on behalf of the 34 member states of the OAS at a panel event which called for a new approach to drug policy to reduce or eliminate the terribly harmful consequences of drug criminalization. Among reformers who initiated the report was Colombia’s President, Juan Manuel Santos, who has been publically critical of drug policy for more than three years. He says our current policy provides a platform for criminal cartels to take power over communities away from the lawful authorities in a number of States. The conclusion of the report was an embrace of human rights practices when dealing with drugs, and an endorsement of the treatment of drug use from a public health perspective rather than as a criminal justice issue. Unfortunately the report was only a recommendation for members of the OAS to consider rather than a foundation for writing any new national drug laws. 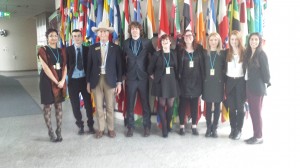 Succeeding the OAS panel was a panel of representatives of governments of the European Union (EU), including Jindřich Vobořil, Minister of Drugs of Czech Republic, Dr. Joao Goulao National Drug Coordinator of Portugal and Ruth Dreifuss, former President of Switzerland. Each panelist explained the unique historical context of the drug problem in their country, but each drew from that experience a critique of drug criminalization that unified them. They called upon delegates at the conference to be more firm in support of major reform in the international debate on the future of drug policy. Decriminalization of drug use among the majority of European countries has been successful at reducing crime and rates of HIV infection, according to the panelists. Because of the current policy successes due to decriminalization of use, Vobořil concluded that currently the EU nations are unlikely to push for further reform beyond decriminalization at this time. I predict, however, that more dramatic policy changes are more likely to be adopted in South American nations because of the urgency of the security-related challenges they face. At the close of the first evening, observing the winds hammering the ropes holding up flags against the 193 flag poles surrounding the building of the UN Office on Drugs and Crime, I was deeply hopeful that logic on drug policy would prevail for the remaining week, for we know too well that logic does not fare well in politics.

Day two began with the long awaited announcement by the Government of Uruguay that courageously defended the legalisation of cannabis as a human rights issue.  We got into the over-crowded hall of the UNODC, in what was the most well attended event of the week to hear addresses by Christian Sederberg among others. The speakers presented different models of cannabis legalization in detail, with each argument dispelling the myths often propounded by defenders of Cannabis prohibition. Some resistance was offered by UNODC officials, who challenged the reform argument that the illegal market could be undermined as a result of State control of the market. The eruption of sniggering in the crowd at those comments suggests that the hollow arguments of prohibitionists are going out of fashion in international politics. The panel presented clear and concise arguments for regulation which ended the discussion amidst strong applause. 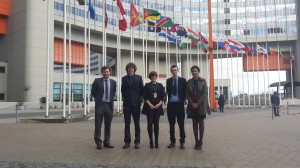 On day three, Students for Sensible Drug Policy International, Law Enforcement Against Prohibition, and Harm Reduction International presented the event “Protecting Youth with Drug Policy: Criminalization has failed”. Damon Barrett opened the panel by posing a critical challenge to the effectiveness of protecting children with current drug policy. Cliodhna Bairead and I, from the National University of Ireland, Galway presented the conclusions of a survey of student drug use and attitudes which we conducted on over 1,000 undergraduate students on the effectiveness of a punitive policy on their drug consumption. 10% of our sample size had come into contact with the law. Of this group, 18% decreased their drug use as a result, 78% of students said their experience with the law made no change to their drug use, and for 8% of students, the consequence of the law actually resulted in an increase in drug use. This indicates that treating drug use with the law as a singular approach is ineffective. Lisa Campbell and Nazlee Maghsoudi of SSDP Canada spoke on the detrimental effects of the recent repeal of harm reduction policies in Canada, by highlighting the discrepancies in the distribution of expenditure in drug treatment. Howard Wooldridge of Law Enforcement Against Prohibition questioned the morality of drug criminalization and argued for the repeal of policy to protect the best interests of young people. During the Q&A part of the program, Delegates from Finland, and Trinidad and Tobago, spoke in favor of our ideas for early intervention and presenting unbiased information for youth. The strong consensus in the room was that criminalizing young people for their drug use has been futile in deterring their drug use and that reform is essential to better protect our youth from the risks associated with drug use. 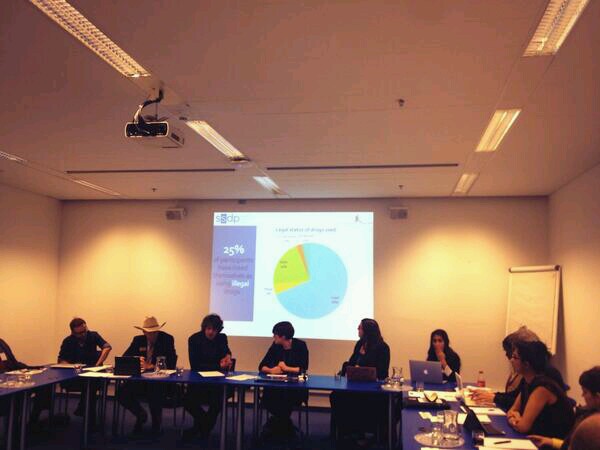 Throughout the week, it seemed that a strong breeze was blowing change in the drug policy atmosphere in Vienna. The efforts of reformers at previous meetings, including Kris Krane, former SSDP Executive Director, have built the momentum for reform in the international community that attends the meetings of the Commission on Narcotic Drugs. The terms of discourse on drug policy within the United Nations are undergoing a fundamental shift. Of course, the path is long and still obscure to actually reform the international drug conventions, but the reform-favoring March winds of Vienna certainly pushed us all in the right direction in 2014. The once universal support for criminalization of drug possession has vanished. For the representatives of SSDP the excitement of participating in constructive dialogue between opposition and proponents of change was one of the greatest highs imaginable. We are all deeply grateful to SSDP for the opportunity to go as credentialed representatives of an accredited non-governmental organization.

In conclusion, I offer my profound thank you to each of our panelists and student delegates; as well as Michael Krawitz, Ayesha Mian and the rest of YODA, Ciaran Maher, Eric Sterling, Sean Lynch, Riona Hughes and the USCG, Drew Stromberg, Betty Aldworth and Connor Kilgallen for their support and assistance of our endeavours at the Commission.

Graham de Barra is the secretary to the Board of Directors and Chairperson of the International Outreach Committee. Graham is a current Master’s student of international human rights law, and led a SSDP delegation to the United Nations Commission on Narcotic Drugs.