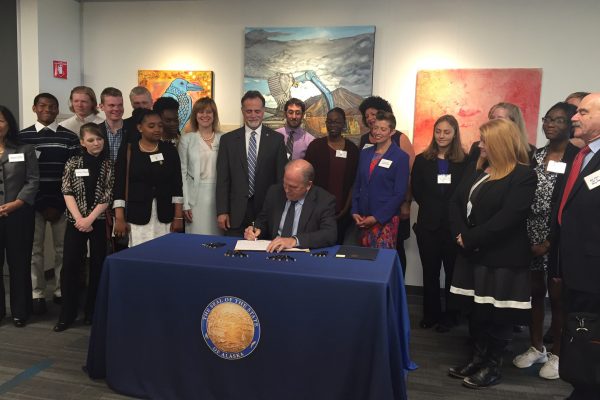 On July 6, 2016, Alaska governor Bill Walker took a major leap towards a sensible alcohol policy by signing SB 165 into law.  Taking effect on October 4, 2016, this new piece of legislation is positive for Alaskan parents and teenagers, as it lowers drinking penalties in multiple ways for those under 21, and instead focuses on educating youth about alcohol and its risks. Under Section 9, Part b, of SB 165, a minor under the age of 21 is not legally allowed to possess or consume alcohol.  However, if they are caught doing so after October of this year, their punishment will be a fine of $500 that will not go on their criminal record, similar to a speeding ticket.  If the minor does not have more than one previous violation, they will have the option of either paying the fine, or enrolling in an educational alcohol program within six months of their violation.  Upon completion, their fine will be reduced to just $50. If the offender has two or more violations on record, they will have the same option of completing the course, and their fee will be reduced to $250.  Prior to this law, if a minor was caught with alcohol, they would have faced a criminal offense of a “Minor In Possession (MIP)” which was usually charged as a misdemeanor and commonly resulted in probation time, community service, and fines up to $600.  Unless excused by a judge, this MIP would be on the offender’s permanent record, which could potentially be harmful to the future of that youth, as employment and college admission are more difficult achievements with a criminal record. The new law doesn’t punish the minor by putting this on their record, but instead gives a fine which can be greatly reduced with a little bit of time and effort, allowing young people to pursue a career without being weighed down by a minor, nonviolent infraction.  The option of lowering the fees also takes the heavy burden off of parents, who are typically the people who actually end up paying their children’s expenses.  This particularly helps low income families who are disproportionately impacted by high fines. Instead of forced community service or probation, SB 165 pushes for increased conversation concerning alcohol consumption through the alcohol educational programs.  The two classes in which youth can enroll to drop their fines will be provided and taught by the Department of Health and Social Services.  Minors have yet another option of participating in a community diversion panel.  These three options will focus on educating the youth about alcohol, which is probably a more effective way of reducing the risks associated with minors consuming alcohol than simply charging a fee or making the offenders come in every week to pass a drug test. The law is still not ideal for some, but it is definitely an improvement led by common sense and changing societal beliefs surrounding alcohol.  Listen to This Week In Drugs to hear more about this new law and other pieces of nationwide drug legislation and change.