A product of the early D.A.R.E. generation, I started college uninformed of drugs and drug policy. I was conditioned to believe that illegal substances would kill me and that drug prohibition didn’t cause more harm than the drugs themselves. Not long after starting college however, I started to question my beliefs and assumptions. I started to question what I had thought I understood about drugs and drug laws.

As I learned more, I reconnected with a like-minded friend I had discussed the drug war with years before. To protect his identity, I’ll call him “Nick” for this story. Nick had been arrested for marijuana possession and although he received a community service sentence instead of jail time, the university wasn’t so forgiving. He lost all of his financial aid, was required to pay back his federal financial aid, and ultimately left school. 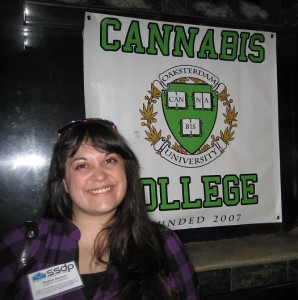 Despite everything he’d been through, instead of feeling defeated, Nick was speaking out against injustice and harmful drug war policies that hurt the wrong people. What’s more, he was taking a stand in Oklahoma, a state far behind the rest of the country in terms of drug policy. Oklahoma wasn’t talking about drug policy reform in 2006. It wasn’t a dinner table topic like it is today. People weren’t ready to start talking about reform, but Nick was. Nick’s courage and tenacity inspired me to get active too. I wanted to get my campus and my state talking about the hard issues; the issues that made them uncomfortable. I knew that Oklahoma needed this discussion and I wanted to start it.

The University of Oklahoma (OU) isn’t the most forward-thinking of universities, especially in terms of re-thinking the way we as a society should approach our drug problems. When I started to organize the OU SSDP, it was the first of its kind in the state. It was that reality that was my most significant motivator in establishing an SSDP chapter in the state. I knew it wouldn’t be easy, but I knew it would be worth it and I knew that it needed to be done.

The challenges in organizing an SSDP chapter at the University of Oklahoma were many, but the most difficult challenge I faced when initially organizing the chapter was in trying to secure a faculty sponsor/advisor, so that we would be able to apply for funding from our student government. The most common responses I got were, I think it’s great what you’re doing, but I’m up for tenure and It’s only my first year, I just don’t want to rock the boat just yet.

After working on the chapter for two years, networking around campus is what finally did the trick – a major life lesson in and of itself. Eventually, we got a call from a couple of graduate students in the college of social work, a testament to the success of our campus networking, who joined our ranks. Through their connections we found a sociology professor who agreed with our mission and wanted to be our faculty advisor.

It was 2009 by the time we finally became an officially recognized chapter and we quickly set forth in trying to build our membership.

In my final year of college, our chapter coordinated with the Students for a Democratic Society (SDS) chapter on our campus to provide the financial backing for OU’s First 4/20 Teach-In. Our chapter organized the event, which featured a three-person panel on the problems surrounding the drug war including mandatory minimum sentencing, high overdose and non-violent offender incarceration rates and the disproportionate rates of female incarceration, which is a particular problem for Oklahoma. The panel included our own faculty sponsor, Norma Sapp, president of the Oklahoma NORML chapter, and Gwendolyn Fields, assistant to Sen. Constance Johnson, D-Oklahoma City (Sen. Johnson was triple booked that evening) and took place on the evening of April 20, 2010.

Before our chapter’s work, drug policy was not an ‘appropriate’ topic of conversation in Oklahoma. Mentioning the topic would have been enough to get you labeled a drug addict or user, or some other colorful term. I knew that we had made an impact when a student came to me and explained that our events and our presence on campus had actually changed her mind and made her think differently about the drug war and drug policy. Knowing that we had made a difference, even for that one girl, made everything worth it.

My Advice for SSDPers Everywhere:

Keep pushing! Even when people disagree with you or don’t understand what you’re doing, listen to what they have to say but don’t let it discourage you or slow you down. Take those negative perceptions and change them, and that starts with listening to what people have to say and asking questions to better understand where they are coming from – doing this will help you formulate the best approach to get them to understand where you are coming from. The 7 Habits of Highly Effective People addresses this excellent activism and life lesson by advising, “seek first to understand, then to be understood.”

Don’t spend too much time with like-minded people. Let them know about SSDP, the great work we’re all doing together, and how they can get involved, but spend the majority of your time talking to the skeptics and those who are downright opposed to SSDP’s mission. Use the opportunity to practice your two-way interviewing skills (also important for job interviews), and to enhance your persuasion techniques. The converts are the key to real change. And remember, the majority of your college education happens outside of the classroom. Don’t be shy or timid; just go for it! Show your student government, your school’s administration and your elected officials that you are a young, politically active person and you are asking for sensible reforms. Be an entrepreneur of positivity, peace, education and sound logic

And this one is huge – especially for those who are fighting the good fight in closed-minded and tight-lipped areas like Oklahoma, where appearances are everything – Remember what Oscar Wilde said, “You can never be overdressed or overeducated.” You’ve heard people say to “dress for the job you want, not the job you have,” well, it’s absolutely true! The more you dress like a professional and less like a student, the more respect you will earn in the professional and political worlds. Sure, it sounds superficial, but appearances count for a lot and you want to be taken seriously.

Kaylee is a graduate of the University of Oklahoma with a BA in journalism, and a minor in sociology/criminology. While working toward her degree, Kaylee established the first SSDP chapter in the state of Oklahoma, serving as chapter president for two years and as an advisor upon graduating. Outside of SSDP, she interned in non-profit public relations and wrote for the student magazine, OU Visitor’s Guide and OKCbiz, Oklahoma City’s premier business magazine.

For more about Kaylee, please visit her intern page.