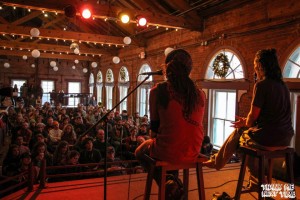 Brian Gilbert of the AMPLIFY Project recently caught up with Jason Takahashi, the wizard behind Papadosio’s incredible live visual show, after Earth Night 2012 a pioneering 2-day celebration put on in conjunction with SolPurpose, Julie North, and the Kickin’ It art collective. Earth Night both combined & celebrated music, spirituality, community and activism through a blend of live music, workshops, meditations & ceremonies all conducted at the intimate Via Vecchia Winery in Downtown Columbus, OH. This all then culminated in a sold-out Winter Solstice celebration with EarthCry, Emancipator & Papadosio at the LC Pavillion also in Columbus on Dec. 21st. Afterwards we caught up with Jason to discuss drug policy reform, music & activism, the benefits and changing laws around hemp cultivation in CO, Earth Night 2012 and much more! Check out our interview below and let us know your thoughts in the comment section. BG: How do you think music & the music community can influence youth to get involved in the political process & activism? JT: Live music is the space where I think kids feel most comfortable being themselves – but sometimes it can become an escape as well. Similarly, as artists we ride a fine line between trying to help people see different realities without forgetting about the one we live in. Life in America can be very confusing because on the surface level and the way things seem on TV its either all good or all bad – always super polarized and we don’t always find the middle ground. Now that we are growing up a little bit more, I think we are ready to be more of a conduit for social change than we have in the past – but we wanna focus on issues that are often overlooked and that legislation can’t always reach but that are so essential to the evolution we wanna see on the planet. I guess what I’m saying is I’m not totally sure – I know how its worked in the past with civil rights and anti-war movements – but we’re kind of venturing into new territory so I guess we’ll have to see. 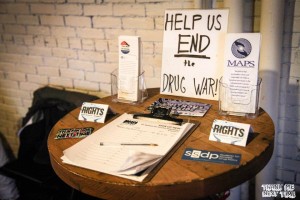 BG: Amendment 64 in Colorado & I-502 in Washington just passed, officially legalizing the recreational use of marijuana. What do you all think this means for these states & drug policy reform in the nation as a whole? JT: I really think anything could happen. There’s always the possibility that Phillip Morris and RJ Reynolds will start doing their thing with cannabis like people have been saying they will for years. If that’s the case, I think we might have an issue on our hands because if marijuana culture starts to look more like alcohol/tobacco culture – I think we’ll run into issues. But with the way things are in Colorado right now – I think the medical marijuana movement has cultivated models for not only medicine, but business that are more advanced and sophisticated that many of the other industries that play a big role in the world we live in today. If that type of mentality can survive this legalization and can be expanded, I think a new political force could be born that America needs right now. There is no sense in this country only being run by the 1% and so-called ‘job creators’ – our diversity in not only who we are, but what we do is what makes this place awesome and we need to remember and embrace that now more than ever. BG: The cultivation of industrial hemp was also just legalized in Colorado, a subject we know you all have a keen interest in as well as other environmentally conscious initiatives and programs, what impact do you foresee this having upon the culture and community in Colorado and at large? JT: YES! This is huge! I never really took the time to understand this subject until I recently started designing some new Papadosio shirts a couple months ago. I found a company in Colorado called ONNO which imports 55% hemp / 45% organic cotton shirts from China and started learning about the benefits of hemp clothing. Not only does hemp require a fraction of the water it takes to grow cotton, but the quality that gives it this ability is its inherent UV protection which gets embedded into the fabric that you then get to wear. Therefore, not only are you using a much more sustainably grown textile but it is actually protecting your skin in this time of ozone depletion and planetary change. There are countless uses for hemp and if you do just a little bit of research, anyone can see that early stages of American history probably wouldn’t have survived without it. In many ways, I see plants like family members – and I feel like we kicked hemp and cannabis out of the family for no good reason and turned out backs on it – turning it into some taboo thing. But it makes sense that this would all start to turn around in this year… I can’t wait to see what happens in Colorado with industrial hemp. I grew up in Colorado and it is a really laid back and pragmatic place and I think a lot of people will be quick to understand how this can be really good for the community there. I also hope the government can create incentives for people to use hemp more and more like they did with solar energy and that the up and coming generation will be quick to integrate and innovate. In the end, importing these types of multi-usage, high- quality goods from places like China especially, when we could simply grow them here whilst creating our own wealth, jobs and material resources – is just about the most un-American thing ever ever heard in my life and I’m thinking that’s something people from all across this country can agree with. 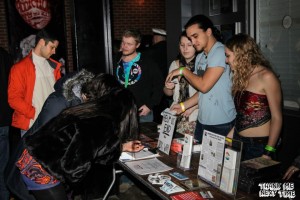 BG: What would you say to the student volunteers & activists who helped work on this initiative or to others who are working on similar campaigns in other parts of the country? JT: It’s all about being able to effectively express ourselves as this time. We have the tools and the platform and now its really about delivering the message. I think cannabis means a thousand things to a thousand different people – and I know in other parts of the country it might be really difficult to even talk about these things. Educate yourself as if you were going to present this to congress or the United Nations and understand that’s how serious this really is. Ending the war against our understanding of these plants is essential to us making progress as a country in the way that nature had always intended. Be smart, keep your head clear and heart open and remember that change is the hard path – but future generations will thank you for it. 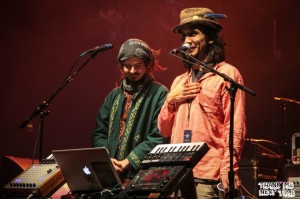 BG: How was Earth Night 2012? Are there any specific aspects of this intricate event you would like to point out and highlight? JT: Earth Night 2012 was literally a dream come true. There are so many awesome things I could say, but I think that it served as a really awesome model for things we can do in a city when we have a couple days and when we get the right team together. We hope to start generating that type of love and vibe everywhere we go in the coming years – and Earth Night was a really awesome step in that direction. I’m in the process of putting together all the awesome content that explains the backstory and the concept behind the event which I planned to have done beforehand, but the T.E.T.I.O.S. tour just wouldn’t stop and every week I had off I was off learning something new to make the show that much more interesting. Nevertheless, I will keep Amplify in the loop for sure – and thank you guys for joining us for what was an unforgettably special weekend. 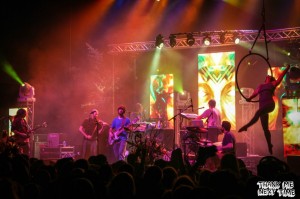 Papadosio performing their song “Paradigm Shift” with Dixon of Dixon’s Violin backing them up while Jason holds down the visuals.

BG: You are playing your New Year’s run shows this year at The Trocadero in Philadelphia, PA and The National in Richmond, VA both cities, and with The National venues, you all have played some amazing shows at in the past. Besides tearing it up with Dopapod are there any surprises in store for these shows? JT: Ha! To be completely honest, I’m personally still waking up from my Earth Night dream and haven’t started on my NYE sets. All I can really say is that when Dopapod and Futexture are in the house – the musical bar is immediately raised, so expect Dosio to match it. Pictures for this interview were taken and graciously provided for our use by Thank Me Next Time. You can count on that Preston!