Another Historic Victory: The MORE Act Has Passed in the House of Representatives 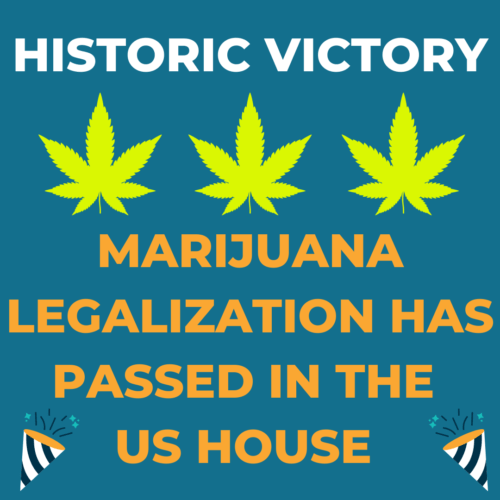 In a historic victory for drug policy reform and a historic blow to marijuana prohibition in the United States, the MORE Act has passed in the House of Representatives.

From the passing of the Controlled Substances Act and its implementation in 1971 to now, hundreds of thousands of people have been arrested for marijuana possession. It’s truly hard to overstate the damage of families and communities caused by the War on Drugs and the militarized police forces that fought for it. Although the War on Drugs is far from over, our MORE Act victory brings us one step closer to implementing drug policies centered on public health and human rights.

We have asked you, our members, alumni, and supporters, to email, Tweet, and call your representatives to support the MORE Act for over a year. You showed up time and time again, telling your House representatives that ‘We Deserve MORE!’. Thank you for showing up. We are honored to have your support.

Marijuana legalization is certainly not guaranteed. As of now, the Senate is occupied by an anti-marijuana majority, and getting any form of legalization passed is going to be an uphill battle. We need your continued support to end our war on marijuana and the people who use it. From now until December 31st, all donations made to SSDP will be matched up to $55,000 by generous SSDP supporters. What would you give to end marijuana prohibition?