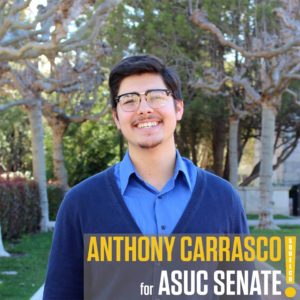 Anthony Carrasco is a sophomore studying Legal Studies and Political Science with a Public Policy minor. Just last week, he was elected as a member of the ASUC Senate with political party SQUELCH! in a race amongst 70 candidates. “What originally got me interested in the campaign was when we started talking about Good Samaritan Policies in SSDP. It was interesting to see how Good Samaritan Policy had been tried and true on college campuses while UC Berkeley abides by zero tolerance policies for the most part. I thought, ‘What if we made some effort to reform this and said, ‘Student safety first, harm reduction first, as opposed to this War on Drugs style of policing?’” Anthony was the only candidate to run on a platform reforming drug and alcohol policies. This platform has never been run on before in the past. “What I’m trying to do is implement a Good Samaritan Policy, similar to the one being proposed at UC Davis, similar to the one being implemented at UC San Diego. The two biggest deterrents for calling for help are the fear of getting in trouble and the cost of calling an ambulance.  Currently, if someone calls an ambulance for you, you get on academic housing probation. In some circumstances, it’s academic probation and housing probation. In some circumstances, it’s academic probation, housing probation, and suspension. And in very extreme cases, which happens every once in awhile, there’s expulsion right across the border, for receiving aid from an ambulance. I think there are some big problems there.” Currently, 100% of the cost of ambulances comes out of students’ pockets. “It’s pretty absurd that we have a college healthcare program that doesn’t cover any of the cost of healthcare.” Anthony plans to work with the University Health Services Tang Center and the Student Health Insurance Plan to partially cover the costs of the ambulance in the student health insurance plan. “For most of the campaign, I was treated as a fringe candidate, talking about this other issue. But this is an issue that affects everyone on campus, and when I was campaigning on Sproul talking to students, I got support on this issue across the board.” In addition to his campaign for more sensible alcohol and drug policies, Anthony is now in charge of a $1500 discretionary fund to allocate towards whatever will help campus. He will also have a voice in allocating student organization funds and has immediate access to administrators, which he hopes will be an opportunity to open doors and facilitate dialogues between the administration and the students. “I’m  very lucky to be elected at UC Berkeley, because it’s the most autonomous, most powerful student government in the entire country. If we can break the system, we can put it together, and we can put it back together with all the pieces this time. I’m looking forward to being an open door to SSDP and other students who want to promote more sensible drug policies on campus.