Written by Sarah Merrigan, SSDP UNGASS Coordinator Intern and member of the Board of Directors 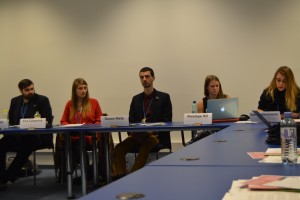 “But what about the children?” is a question often asked during conversations about drug policy reform, but rarely answered by the children themselves. However, at this year’s 59th Commission on Narcotic Drugs, Students for Sensible Drug Policy partnered with our global allies to turn the tide. On Thursday, March 17th, members of SSDP, Canadian Students for Sensible Drug Policy (CSSDP), and YouthRISE presented a side event titled “Protecting the World’s Youth From Drug Policy.” Jake Agliata, Outreach Coordinator for SSDP’s international chapters, began the event by introducing the coalition of drug policy reform organizations which represent thousands of young people on six different continents. Our coalition intends to amplify youth voices and draw attention to the fact that young people are both willing and able to speak for ourselves on these monumentally important issues. YouthRISE member Eva Césarová began by pointing out that nearly every activity people engage in on a daily basis poses risks to our health; using seatbelts while driving, using climbing equipment while hiking, and wearing helmets while playing ice hockey, etc. No matter the activity, we minimize these risks by practicing harm reduction. Society does not deem ice hockey players unworthy of protection from head injury because of their choice to play the game, so why should our treatment of people who use drugs be any different? The implementation of harm reduction measures is a necessary part of social progress in any society and it is to our detriment that we continue to ignore this fact. While we recognize that in an ideal world everyone would behave in a manner that prevented harms altogether, we must be willing to admit that this is simply not the case. People have used drugs for all of human history. Expectations of achieving a so-called “drug-free world” are, frankly, ludicrous. Societal acceptance of such a naive belief has contributed greatly to the marginalization and stigmatization of people who use drugs all around the world. Only through pragmatism and empathy can we expect to achieve a world in which the right to the highest attainable standard of physical and mental health is feasible for everyone. 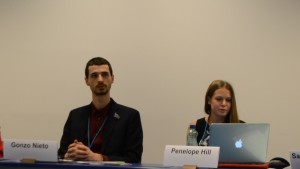 Gonzo Nieto talked about how current drug policies make access to education difficult for youth around the globe. Penny Hill discussed the human rights implications of drug policies and how they specifically impact youth.

Focusing next on the various ways in which education is impacted by drug policy, Gonzo Nieto, chair of the CSSDP Board of Directors, began by discussing financial barriers to education such as the Higher Education Act (HEA) in the United States. Punitive policies such as the HEA which require expulsion or suspension for low-level drug offenses disproportionately affect young people from low-income families who are already facing unique barriers to future employment and other opportunities. Similarly, policies which require student drug testing or the presence of drug-sniffing dogs in schools impede students’ future opportunities, undermine trust between students and teachers, and have been shown to be both costly and ineffective. The current state of drug policies also hinders access to objective, evidence-based drug education by giving preferential treatment to programs which preach “Just Say No” rhetoric in spite of data showing their failed efficiency. It would be in everyone’s best interest to include youth in the development of programs catered towards us, as young people are far more aware of their needs than are disconnected academics. In particular, our coalition would like to see increased focus on peer education programs and those which differentiate between non-problematic drug use and drug abuse. 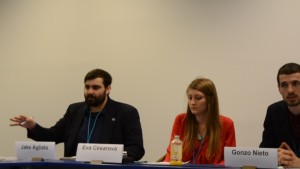 Jake Agliata responds to a question from the audience.

Next, Penny Hill from SSDP Australia discussed the impact of drug policy on human rights, stating that human rights conventions should be privileged over the current drug control conventions. Under the existing framework, a multitude of fundamental human rights are violated in the name of drug policy. Particularly, non-discrimination, the best interests of the child, the right to appropriate information, the right to privacy, the right to health and health services, and the right to education all face unnecessary barriers because of the punitive nature of existing policies. In addition to violating international human rights laws, the implementation of the drug conventions as they currently exist obstructs the path towards achieving the Sustainable Development Goals (SDGs) by 2030. International ideals such as ensuring healthy lives and promoting well-being; ensuring inclusive and quality education; promoting inclusive and sustainable economic growth; reducing inequality within and among countries; and promoting just, peaceful, and inclusive societies will likely remain unrealized if changes to the drug control system are not made in the immediate future. Sara Velimirovic, one of SSDP’s UNGASS Coordinator interns, followed by discussing the results of our Global Youth Coalition Consultation. Resulting from extensive conversations with youth and members of our esteemed Advisory Committee both in-person and over the web, the paper expresses young people’s belief that existing drug policies have failed our generation and our society. The current drug control regime not only impedes the development of young people but also interferes with our full enjoyment of basic human rights. Drug policies are often justified in the name of protecting young people, but too often we are encouraged – and made – to be seen and not heard. However, if destructive policies are to continue being implemented in our name, we must be allowed to speak for ourselves in a manner that does not encourage our tokenization. Too often, it is assumed that young people simply do not know what we want, when this could not be farther from the truth. Harm reduction, for example, should be enshrined in the drug conventions so that a culture of safety around substance use can be allowed to flourish. Young people want drug policies which prioritize evidence, compassion, health, and human rights; simply put, we want drug policies to start making sense. Member states, if not already doing so, should be encouraged to acknowledge the efficacy of harm reduction measures and invest in services such as drug checking kits, supervised injection facilities, educational material about risk minimization, and nightlife harm reduction. Further, existing policies should be evaluated with regard to young people and the relevant treaties, such as the Convention on the Rights of the Child. Drug education which is evidence-based, age-appropriate, and objective should be provided to young people in a manner which prioritize the reduction of harm rather than relying on intimidation and scare tactics. It is imperative that society as a whole recognizes that young people use drugs. Youth most at risk of the effects of criminalization tend to be those already on the margins of society and damaging their future prospects does little, if anything, to benefit anyone. Lastly, the UN must take steps to ensure active and meaningful youth participation in the upcoming UNGASS and future discussions on drug policy. While bodies like the Youth Forum and the Civil Society Task Force have served as limited outlets for young people, they are simply not enough. It is of the utmost importance that young people are included on member state delegations and that youth-focused side events are prioritized. While the motto of UNGASS is “A Better Tomorrow for the World’s Youth,” we wish for an approach to drug policy which seeks a better tomorrow with the world’s youth.