HomeBlog Ayotzinapa: How Heroin Trafficking, Mining, and US Foreign Policy Played a Role

Ayotzinapa: How Heroin Trafficking, Mining, and US Foreign Policy Played a Role

Ayotzinapa: How Heroin Trafficking, Mining, and US Foreign Policy Played a Role

This is the third and final of a series of blog posts by SSDP Latin America Policy intern Jacki Moreira about the upcoming 2 year anniversary of the disappearance of 43 students from the Ayotzinapa Rural School. Today, she takes a look as some of the other external factors that contributed to the tragedy.  Transnational Drug Trafficking 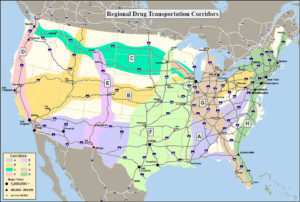 Shipments of drugs are transported to dozens of national and regional distribution centers through eight principal corridors to the major drug markets within the United States.

The Grupo Interdisciplinario de Expertos Independientes (GIEI) report recommended heroin trafficking should be further investigated as a factor into the disappearances of the students. There has been an increase in heroin consumption in the U.S., which means increased production, competition, and violence for the communities of Guerrero, a state where pueblos have relied on the harvest of the Amapola plant as a source of income for decades. The GIEI points to several cases in the U.S. of heroin being trafficked from this region. In one case from Chicago, an alleged member of Guerreros Unidos was arrested in the investigation of heroin trafficking on passenger buses to Chicago. The GIEI proposes that the students may have unknowingly commandeered a passenger bus that was a part of this Guerrero to Chicago drug route. The GIEI made the recommendation that the 5th bus’s regular route, which passes by an aerodrome, be further investigated. This bus was also not included in the government’s investigation and when the GIEI asked for the presentation of the bus, the bus they were provided with by the PGR (Procuraduría General de la República) did not seem to be the same one from video evidence from the attack. The analysis of phone records from the municipal police on the night of the 26th reveal that at least 6 police officers were in contact with the number connected to a presumed Guerreros Unidos member, known as Caminante. This suggests the potential of a smaller, integrated organized crime group. Mining: gold, titanium, uranium A new book by Mexican journalists Francisco Cruz, Félix Santana, and Miguel Ángel Alvarado, La guerra que nos ocultan, digs further into the case of Ayotzinapa, pointing to the role of natural resources and foreign corporate interests in the disappearances. Guerrero and the region are rich in titanium, uranium, and gold. The authors point to a history of PRI and PAN governments (two of the major political parties in the country) giving concessions to the economic interests of mining companies. One such company is the Canadian mining company Blackfire Exploration, accused of murdering an anti-mining activist in Chiapas n 2009. In May 2014, another Canadian company, Goldcorp, signed a deal paying an estimated $3 million to landholders and a communal land fund in Guerrero. Local cartels Guerreros Unidos and Los Rojos have been fighting in the region for control of this new wealth. This deal being made four months before the disappearances in Iguala, the larger municipality in the region, makes the presence of Goldcorp and gold mining a cause to be further investigated. Role of the US C-4: Command, Control, Communications, and Coordination, is the name of the communications infrastructure funded by Plataforma México. The U.S. has supplied millions to this program that was created to connect local, state, and federal agencies in order to increase efficiency in combating organized crime and the trafficking of drugs. Since the initiation of Bush’s Mérida Initiative and Obama’s Beyond Mérida Initiative, not only has the U.S. supplied billions of dollars, military equipment, and training to México’s military and police forces, but it has also funded a communications and surveillance system which have contributed to human rights violations. In the name of the War on Drugs, U.S. policies have only militarized and enhanced the capacity of trafficking. In several parts of the country politicians, elected officials, military, and police have all been implicated in participation in the drug trade or in 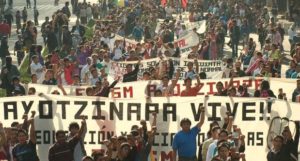 cover-ups of human rights abuses, such as in the 2014 killings in Tlatlya, México and the 2011 San Pedro massacre. C-4 centers have the capacity to access public and private cameras. On the night of the attack and disappearances of Iguala, this U.S-funded “command and control facility” was used to monitor the students of Ayotzinapa from the time they left their school and to facilitate communication between the Army, federal and municipal police. According to a document obtained by Proceso and the journalists Anabel Hernández and Steve Fisher, notice of the students’ departure was transmitted through the C-4 of Chilpancingo to state and federal police, who arrived at a federal highway system to intercept them. The boss of the federal police in the area was notified of the movements that night and two members of the military were present in the C-4 center. Despite this monitoring, neither the federal police nor the Army interfered to prevent the murders and disappearances of September 26th. Even more likely, these centers were used as a mechanism for these forces to work in collusion with the attack. The one week anniversary of Ayotzinapa is a week from today. For more information on ways you can take action on September 26th, check out this organizing guide: http://ssdp.org/assets/SSDP-Ayotzinapa-Organizing-Guide.pdf A student from Escuela Normal Raúl Isidro Burgos and a mother of the 43 will be coming to the U.S. as apart of la Caravana Contra la Represión en México this October, visiting cities across the U.S. For updates on the Caravan see: http://www.contrarepresionmex.org/