Since 2005, SSDP has helped enact Good Samaritan policies at more than 240 colleges and universities across the United States. These measures for medical amnesty foster a safe environment, on-campus and off, enabling students to seek help for emergencies without hesitation or fear of severe punishment. But despite their proven effectiveness, Good Samaritan policies are still met with caution and hesitation by some college administrators.

Roosevelt University’s SSDP chapter campaigned for two years to get a Good Samaritan protocol approved. “Good [Samaritan] was important to our chapter because many of us were seeing the damage that our conduct policies regarding drugs and alcohol were doing to our campus community,” says Vilmarie Narloch, co-president of Roosevelt University SSDP. “We were looking more like a school that didn’t care about it’s students, but we knew that this was not an accurate representation of our university.” She adds that administrators preferred to call the initiative a “protocol” out of concern for the lack of flexibility in calling it a “policy.”

Mike Vogt, president of the SSDP chapter at Massachusetts College of Liberal Arts (MCLA), prioritized his school’s punitive policies when taking on the leadership role. “Having a stigma on your record regarding reckless drinking prevents students from getting jobs on campus and jeopardizes their chances of living on campus,” says Mike. “I wanted to promote and encourage responsibility and a sense of community for the students, and also help protect the students.”

For both Mike and Vilmarie, preparation and knowledge were the keys to success. School administrators are more likely to consider well-researched proposals that anticipate and address concerns about the implications, the possibilities of abuse, and more. 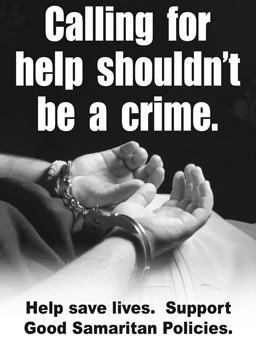 “We did a heavy amount of research on existing policies, and did a lot of comparing and contrasting,” says Mike. He recommends finding schools with similar attributes (i.e. public or private, urban or rural, small or large student population) that have already passed Good Samaritan policies to analyze the language of the policy. SSDP maintains a database of such schools.

Roosevelt University SSDP initially became involved with state-level legislation, which proved to be a powerful stepping-stone for campus initiatives. “We had been working hard to advocate for our statewide Good Samaritan law, and saw the campus policy as an extension of this activism,” says Vilmarie. “Once the [Illinois] Emergency Medical Services Access Act became law, it was a no-brainer to us to work to extend and translate the law to our campus community.”

Having a foundation for a proposal that reflects a school’s specific environment makes it easier to anticipate questions administrators will undoubtedly have. Though MCLA SSDP and the school’s administration simultaneously approached one another to discuss a Good Samaritan policy, Mike recalls facing a laundry list of inquiries: “Would it protect the victim and the caller? Could it be used more than once? Can it be used off campus? Does it protect students for all drugs or just alcohol? I’m happy and proud to say they were impressed with our knowledge of the matter and our drive to push this policy.”

Echoing this sentiment, Vilmarie found support, essential information, and examples of successful policy drafts on the Facebook page SSDP Good Samaritan Policy Working Group. SSDP’s main campaign page also proved to be an important resource that helped the chapter organize and align what changes they wanted to see with changes other schools had already implemented. “At one point, I was able to respond to questions regarding other schools that had policies that included all drugs within 30 minutes—all because it was all right there laid out for us,” says Vilmarie. “I don’t think our administrators saw that coming at all!”

While both SSDP chapters were able to bypass student government proceedings and deal directly with those in the best position to enact new rules, dealing with administrators rather than fellow students comes with its own set of challenges. Vilmarie and her fellow chapter members wanted to “go big or go home,” so they approached the school’s Director of Community Standards and Student Engagement, who Vilmarie had met through the Chicago Area Consortium on College Alcohol Harm Reduction. “Had I not had this relationship, I think we still would have approached admins first, versus going through our student government, as we all saw this as an issue worthy of immediate attention, and we wanted to decrease any possibility of interference and ‘middle men’ so that the process could move along more smoothly,” she says. 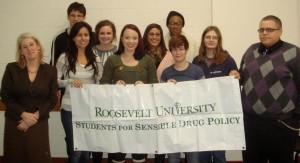 “I was concerned when we had to meet with the board of trustees,” says Mike of his own experience facing administration. “It was intimidating, to say the least.”

Maintaining a professional rapport went a long way for both chapters. It’s important to understand administrators’ concerns as legitimate, and take the opportunity to present facts and evidence that exemplify the benefits of Good Samaritan policies. The mutual respect fostered by Roosevelt University SSDP continues to be important to Vilmarie and her team as they recently learned that, though the Good Samaritan protocol was passed, it would appear on the Student Services and Residence Life webpages instead of the student handbook while administrators worked out the kinks. The chapter is currently developing a petition and gathering formal feedback from students to move the process along.

Lastly, both Mike and Vilmarie stress the importance of relying on teamwork among chapter members to brainstorm, research, draft, and advocate. “This club is a group; not a one man show,” says Mike. “No one can do it alone, so work with your members and e-board to make the sensible changes you know can help save the lives of students.”

Are you interested in advocating for a Good Samaritan Policy on your campus but unsure where to start? Here are some tips to help:

Get in touch with your Outreach Director for questions, help with strategy, or additional resources.