Chapter Leader of the Week

SSDP: When did you 1st get involved with SSDP?

ALFRED: I had an epiphany one day when talking to a former staff member that worked in the same academic department as I did for my Work Study part time job (Thanks Vanessa Pons!!). I was always very vocal about my thoughts regarding the illegality of Cannabis and how ridiculous and hypocritical it was, and she looked right at me and said “well, why don’t you start a student organization?”. My eyes lit up!

I originally began looking up ways to start a NORML chapter at my school, since that was the first organization that popped into my mind. I knew the NORML chapter had been extremely active and large on University of Central Florida’s campus. I eventually met Eric Stevens, however, who had been running the Miami Beach decriminalization campaign, and he introduced me to SSDP and the broader injustices of the War on Drugs that stretched far beyond just Cannabis prohibition. It was at that moment that I knew SSDP was the perfect student organization to establish at my school and I began the process of getting approval. It took me almost an entire year, but I was persistent, and now the chapter is a reality!

SSDP: What has been your favorite SSDP experience? 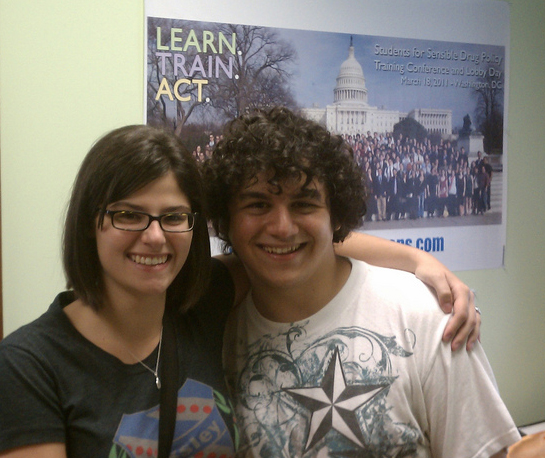 ALFRED: My favorite SSDP experience, by far, has been the 2011 SSDP National Conference. At that point, I was still waiting to hear back from my school on whether or not they were going to officially approve my chapter, and I was having some doubts and insecurities. The conference changed my attitude for the better, and completely dispelled any insecurities that I may have been having. I started meeting other people at all stages of chapter growth: people who had just started chapters, people who had been steadily growing their chapter for a while and been receiving awards from their schools, and even people who had led their chapters to win huge victories in changing policies on both the campus level and the governmental level. I was absolutely overwhelmed with joy and with dreams of unlimited possibility.

The single moment that really shattered any chance for doubt in my mind for the rest of my life, however, was hearing Ethan Nadelmann address us all about our role as youth in the growing drug policy movement. His speech may well have changed my life, and I was lucky enough to be sitting on the floor in front of him, 3 feet away, during the entire thing.

SSDP: What issues are most important for your chapter?

ALFRED: Our chapter has three big things on our plate right now.

On a campus level, we are going to attempt to institute a Good Samaritan Policy on our campus. We have already met with the Dean of Students on our campus and she has agreed to let us officially propose a draft of the GSP at the end of this Fall semester. We are going to be setting up a GSP sub-committee within our chapter so that we may draft up a stellar proposal.

On a local level, we are going to be very involved in ensuring that the Miami Beach decriminalization effort is successful. Eric Stevens has done a great job of collecting enough signatures to force the issue to be voted on in the next city election, and we are confident that the citizens of the very progressive-minded city of Miami Beach will vote accordingly. The stumbling block here now is that the City Attorney of Miami Beach, Jose Smith, insists that implementing a lower penalty for Cannabis possession at a city level is illegal. He actually admitted that the first time he submitted this opinion, he never even READ the proposed charter amendment. Now that he allegedly has read it, though, he still insists that it is illegal and impossible to implement, even if the citizens vote it in. Considering that dozens of cities in the U.S. and the entire state of Connecticut have implemented decriminalization of Cannabis possession successfully, we feel that his opinion is politically motivated and we are going to be organizing actions against him until he can fully explain why he believes this is illegal.

Finally, in a more general sense, we are going to do our best to break the stigma associated with discussing alternatives to our current drug policies. By the end of the year, I would like people to stop seeing us as “the weed club” and start respecting the broader health and social justice issues that we advocate for which are the consequences of the failed war on drugs. In my short time as chapter president, I have already found a professor from almost every single academic department at my school who is outspoken against the war on drugs for various reasons, and it is my aim to bring their arguments to the forefront of the campus community so that my fellow students can start to realize how serious this issue really is.

SSDP: Do you have any events planned for the this semester?

ALFRED: We JUST held our first event of the semester, “Know Your Rights!”, where we had a screening of the movie BUSTED and then a question and answer session with 1 ACLU lawyer and 4 Public Defenders. The event was a solid hit! We actually went over our 2 hour scheduled time because everyone had so many great questions for the lawyers and there was such a great discussion occurring.

What I am really, really looking forward to this year, however, is bringing in Irv Rosenfeld, one of the few remaining Federal medical marijuana patients, to speak on campus. He lives an hour away in the city right above Miami and is willing to come down to talk to the University of Miami students. This has the potential to be one of the biggest events in the entire school! He is a living, breathing contradiction to the United States government’s classification of Cannabis as a Schedule I substance with “no medicinal benefits”, a true symbol of their hypocrisy. Besides, the guy holds the record for the most joints smoked by a person in a lifetime, and he did so using our tax money. That’s just interesting.

SSDP: What do you like best about being part of SSDP?

ALFRED: I like that I have a network of over 150 other chapters and a full-time national staff to reach out to when I need help or advice. I don’t think I could have done it without the support! I also like that we are officially recognized as consultants to the United Nations.

SSDP: Do you have any advice for other chapter leaders?

ALFRED: My advice: Don’t give up. If you are someone who want’s to start a chapter at your school because nothing like it exists, I say go for it. Don’t worry about what people think or say at this point. The best way to shut them up is to prove them wrong and show them you are serious. It took me almost a year fighting with my school to get my chapter officially recognized, but I succeeded. Now, no ones laughing.

If you already ARE a chapter leader, my advice is STILL to simply not give up. When you are trying to make things happen for your organization and the people who you are in contact with do not respond to you in a timely fashion (whether they be school administrators or potential outside guest speakers) then you need to be respectful but firm in continuing to put the pressure on them. It isn’t easy, but in the end, sometimes you need to be more of an adult than the supposed authority figures when it comes to being prompt and professional.

SSDP: Any fun facts about you?

ALFRED: My hobbies/interests include: photography (I took the 2011 SSDP conference group photo!), Stumbleupon and Reddit.com, civil liberties and social justice, separation of church and state, bacon, video games (interestingly, I have no more free time to actually PLAY video games anymore, but I still keep up with the latest industry news and developments), he internet, and developments related to ensuring that the internet remains open, free, and accessible to everyone.