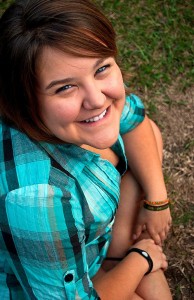 School: College of Charleston   Position: Chapter President 2011-2012   Studying: Communication, Corporate and Organizational Concentration/American Studies minor   SSDP: When did you first get involved with SSDP?     MELISSA: I became involved with SSDP when Kat Humphries (former President and chapter founder) attended the International SSDP Conference in San Francisco in 2010 and wanted to start the chapter at CofC.  After tedious hours in front of the student senate, we were finally confirmed and  I was the founding Secretary from 2010-2011.   SSDP: What has been your favorite SSDP experience (event, activity, interaction, opportunity, etc.)?     MELISSA: *very hard question to answer* In working with SSDP and my community, AMPLIFY has really allowed me to connect drug reform and the music communities.  I have tabled at three different shows this year and each one has allowed me to talk to people from one end of the spectrum to the other.  I also got to meet a lot of the artists that are part of AMPLIFY, including Easy Star All Stars, Cas Haley, Giant Panda Guerrilla Dub Squad and more, which have been some really stellar moments for my chapter and me.  Charleston is very fortunate for having such amazing venues all around the peninsula, so there are so many opportunities for us to reach out and see that there is more to drug reform than just “pot smoking.”  People really are willing to open up and be honest about their opinions when they are in a comfortable environment and have someone that they trust to talk to.  I love being the person that they trust. In addition, the recent 3rd Annual Summer SSDP camping trip and the 2011 Training Conference & Lobby Day were two of the most life-changing memories I have, the feeling of getting to interact with people who all believe in the same idea almost feels like a drug itself.  The passion for change is amazing, and getting to lobby my Congressional members in DC was also pretty memorable.  SSDPers are some of the most friendly, passionate, amazing and wonderful people you will ever meet, so spending time with them is priceless! (And I should know, I spent 32 hours in the car with Kat driving to and from the 2011 Camping Trip in NY! I would do it all again exactly the same too).   SSDP: What issues are most important for your chapter?     MELISSA: One of the biggest issues that we’re focusing on for this coming semester is drug education and policy reform.  Our state has a history of being “behind in education,” and that’s not something I’m willing to accept when it comes to drug use.  Also, we want to give our campus and community more information about how important a hemp industry could be for our economy.  The state legislature is attempting to pass a new voter ID law that would make it almost impossible for students to vote while away at school, so that is something that we’re hoping to make students aware of through the help of the ACLU and the Leauge of Women’s Voters-Charleston Area Chapter.   SSDP: Do you have any events planned for the the Fall 2011 semester?     MELISSA: Well, I am still in the process of making some big plans, but after working with the South Carolina ACLU during the 40th Anniversary Vigil for Victims of the Drug War, we are opening up a relationship with them to not only inform students of their rights but help encourage people to resist the proposed South Carolina ID voter legislation.  We are also hoping to have a series of events that include the League of Women Voters and how the drug war has affected women and families, conversations with different authors who have written about the war on drugs and (something I’m personally interested in) how different religions look at casual drug use as well as using drugs for spiritual experiences.  Our first meeting/event will feature a screening of “Busted: A Citizen’s Guide to Police Encounters.”   SSDP: What do you like best about being part of SSDP?     MELISSA: It is really hard to answer this question because SSDP has taken over my life in the best way possible.  I would have to say the people I have gotten to meet.  I have always had a passion drug reform but until I discovered SSDP I thought I was in the extreme minority.  SSDP has given me more opportunities than I could have imagined and each day that I get to work as a part of it I feel blessed.  I also really enjoy getting to be a part of AMPLIFY.  I love music and drug reform, so anytime I have the opportunity to combine the two, I’m a very happy camper.   SSDP: Any fun facts about you?     MELISSA: I can African tribal dance. I was Secretary of my high school’s National Honor Society and on the Yearbook staff all four years.  I work for a charter boat fishing company in Charleston, so I love getting to go out on the water and catch fish whenever I can (although I throw them back because I’m a vegetarian).   SSDP:  Do you have any advice for other chapter leaders?     MELISSA: Do not give up hope, because the harder you have to work to make things happen, the better it will feel when you finally get to do it.  SSDPers are an an amazing sources of inspiration and encouragement anytime you feel down.  Have as much fun as humanly possible, there’s no point in doing anything if you don’t enjoy it! 🙂 Back to top