Bradley Steinman is one of SSDP’s newest activists and he’s already jumping into the world of drug policy reform with impressive ideas for building SSDP’s chapter network at law schools around the country. Bradley is forming SSDP’s first chapter at the Lewis & Clark Law School in Portland, Oregon. In the last year SSDP has, not surprisingly, seen a rise in interest from law students and Bradley has been one of our most enthusiastic and dedicated. I had a chance to ask Bradley a few questions about his involvement with SSDP so far and get some insight into what it’s like to form a chapter at a law school. How did you first hear about SSDP and what made you want to get involved? I first heard about SSDP while conducting research for my senior thesis at Indiana University, entitled ‘Lifting the Legal Haze Surrounding Medical Marijuana.” When I arrived at law school I pictured myself getting involved in some sort of drug policy student group, and was surprised that there wasn’t one on my campus yet. 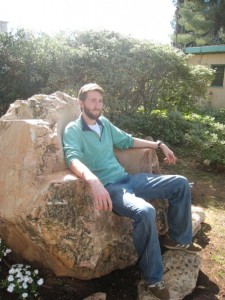 Many of our activists have unique stories about how they came to realize that the drug war is a failure. Do you have one you can share? Two kids that grew up on my street died of heroin overdoses within two years of each other. One of them was a best friend of mine growing up. I grew up in the idyllic northern suburbs of Chicago, IL. I wasn’t from “the streets.” When I was at Indiana University, a friend and I went to our school’s health center to get help for a mutual friend of ours that had developed a drug abuse problem. We asked the school to intervene without getting police involved, and they told us that there was nothing they could do for our friend. My friend and I decided to confront this friend ourselves. He denied having a problem, but thanked us for our concern. A couple weeks later he had a drug overdose and suffered permanent brain damage.   Why do you think it’s important for law students to be a part of SSDP?  One of SSDP’s first chapters was started at a law school. By getting back to our roots and focusing on getting law schools involved in our movement again, a veritable goldmine of untapped resources will be made available to us. As future lawyers, business leaders, educators, judges, government administrators, and politicians, we are in a unique position to change the rules from the inside out. We have tremendous abilities, energy, and access to resources that put us in a position to achieve results disproportionately greater than our numbers. Is there a particular campaign you’re eager to work on with your chapter? Marijuana law reform. As one of the 16 states that have legalized medical marijuana, and the first state in the country to decriminalize marijuana possession, Oregon should continue to be a pioneer in marijuana policy reform. Right now Oregon law illogically forbids medical marijuana dispensaries, and strictly enforces a law against selling medical marijuana for profit. This is a terrible framework for the short term, and the future. With the Oregon Cannabis Tax Act of 2012 in the pipeline, full legalization is a legitimate possibility. But without a proper infrastructure in place to restrain the industry, full legalization would be disastrous. We need to act swiftly to legalize medical dispensaries, and lay out a regulatory framework that considers zoning, licensing, taxation and reinvestment, and the desires of local communities.  Without this kind of infrastructure and foresight, marijuana dispensaries will pop up anywhere and everywhere, becoming a huge liability for Oregon the way they have in L.A. and Denver. A gradual, tightly regulated approach is necessary to harness the benefits of legalization, and to internalize and mitigate the inevitable social costs of legalizing a drug. What do you hope to gain from forming an SSDP chapter? I hope to put the War on Drugs under the microscope at a prestigious law school and see what happens. I’m hoping to educate myself and my peers, give our students an outlet to channel their passions, give our faculty and community leaders a venue to voice their opinions, synchronize the network of drug policy reformers in this state, and ultimately change the laws of Oregon and the nation for the better. I want other law students to recognize that a career in drug policy reform is a pragmatic, just, and compassionate career choice. I just want people to know the truth about the War on Drugs, and the rest should take care of itself. Do you have any advice for other law students that are considering starting an SSDP chapter? If you have friends at your school, you have members for your group. Talk to your favorite professors about drug policy reform. Be open-minded, respectful, and engaged. Starting a group has been easy, keeping it productive is going to be the challenge. Talk to Jesse Stout, myself, and other leaders from SSDP. The SSDP website has great resources. Reach out to leaders in the local community. I want to thank my mentor and boss this summer, attorney John Lucy IV. Thanks for giving me a chance, and all you’ve done for our movement. Back to top