HomeBlog News Drug Laws in the Philippines and Southeast Asia

Drug Laws in the Philippines and Southeast Asia

Drug Laws in the Philippines and Southeast Asia

This article first appeared on The Libertarian. In an interesting indication of just how far support for marijuana reform has spread, some lawmakers in the Philippines have expressed interest in legalizing medical marijuana. Others are opposed, making reference to international treaty obligations and claiming the data supporting the drug’s medicinal use is not yet “incontrovertible.” If passed, this reform would indicate a small but welcome shift away from the prevailing policies in the country and the region. Representative Rodolfo Albano III, leader of the opposition bloc in the legislature, explained that “mothers whose children are afflicted with epilepsy” had asked him to support the cause. The main group pushing for such reforms appears to be Phillipine Moms for Medical Marijuana. Although clinical trials have not yet been conducted testing marijuana to treat the condition, there is notable anecdotal evidence that the drug can prevent epileptic seizures. An extract from a particular strain of marijuana with an unusual chemical composition has been used to treat several children without the usual psychoactive effects associated with marijuana. In an interesting indicator of the influence of US mainstream media on the far side of the world, Albano cited CNN contributor Dr. Sanjay Gupta in support of his position. While the United States and Latin America have been focal points of reform lately, Southeast Asia has retained some of the strictest anti-drug laws in the world, and this includes marijuana laws. Several websites provide sobering summaries to warn potential travelers to the region about these policies. Many nations in the region retain the death penalty for certain drug offenses.1 While the death penalty also exists in US law for large-scale drug trafficking, it has yet to be used against any American offender.2 No one in the US has been executed for a crime other than murder since 1964, and to do so would be unconstitutional according to a 2008 ruling. Although it is far more developed than most countries in the region economically, Singapore’s drug laws remain at least as harsh as any of its neighbors. However, in the city-state, where a young Australian man was hanged in 2005 for smuggling heroin, low-level drug trafficking is no longer subject to a mandatory death penalty. Instead, judges now have the discretion to punish such offenses by life imprisonment, plus caning. This is only applicable to very narrowly defined set of offenders; the person in question “must only be a courier and not involved in the supply or distribution of drugs, and the offender must co-operate with authorities or be shown to be mentally disabled.” Last year saw the first case of this new “leniency” on display. People in the city-state can still be subjected to random drug tests, and can find themselves in legal trouble for testing positive, even for drugs consumed while outside the country. 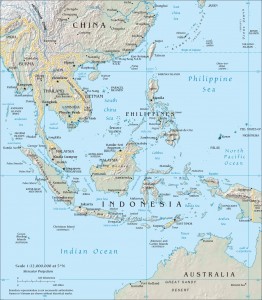 In nearby Indonesia, where a “war on drugs” was officially launched in 1997, the law makes it a crime for parents to fail to report their own drug-dependent children to the police. In Thailand, over 2,000 people were murdered by police and public officials as part of a “war on drugs” in early 2003. Top government officials openly endorsed such measures, with the Prime Minister making comments like “We have to shoot to kill and confiscate their assets as well, so their sinful inheritance will not be passed on.” The actual enforcement of the drug laws seems to be much more lax in Cambodia, particularly regarding marijuana, and in Laos. Some menus at restaurants in Laos openly refer to marijuana, opium and psychedelic mushrooms. This is true, for example, in the tourist town of Vang Vieng; photos can be found here. Still, though, strict prohibitionist laws essentially criminalizing drug use remain on the books, and an estimated 1,200 people in Laos are in detention without trial at treatment centers as of last year. Brutal conditions in these treatment centers have been reported by Human Rights Watch, including beatings and rape. In the Philippines itself, a 2002 law provides for “life imprisonment to death” for selling or importing drugs, regardless of the amount involved, including opium poppies, “even for floral, decorative and culinary purposes.” The same punishment applies for anyone who “shall maintain a den, dive or resort where any dangerous drug is used or sold in any form.” This last provision is an especially brutal example of the same principle on display in the US in the RAVE Act, introduced in 2002 by then-Senator Joe Biden and passed in slightly modified form the following year. Illicit drug users, it seems fair to say, do not elicit much sympathy in the region. The Philippines Drug Enforcement Administration estimated in 2009 that there were 6.5 million illegal drug users in a nation of about 99 million, or about 7% of the population, and that they were disproportionately young, unemployed, and not college-educated.3 Any reform which seems to be concerned with their rights, then, may be easy for many in the country to dismiss. However, if passed into law, medical marijuana could help to change the public image of drugs in the Philippines. Some of the numerous conditions which cannabis can help to treat are relatively common. This means that if medical cannabis becomes accepted along similar lines to the situation in much of the United States, a much larger portion of the population would be acquainted with someone who uses the drug without apparent ill effects. The distinction between a normal person and a drug user would then not appear so stark, and the willingness to treat users as dangerous criminals would be weakened. This is arguably what happened in the US, where the still-growing success of the medical marijuana movement has been followed by lower perceptions that marijuana use itself is immoral and dramatically higher public interest in legalizing marijuana. If this were to happen in the Philippines, it would be a welcome step toward a drug policy which respects human rights.

1. These include Malaysia, Indonesia, Thailand (see page 30), Vietnam, Singapore, where over 400 people have been hanged since 1991, and the Philippines. 2. The relevant law, 18 U.S.C. 3591(b), was passed in 1994. 3. The same document admits that less than 1% of this number have been admitted to rehabilitation centers. Assuming the government has the common prohibitionist attitude that all users should be “cured” or at least treated so as to achieve a “drug-free country,” this is evidence that their strategy is not working toward this goal.