HomeUncategorized Drug policy reform must define the U.S. 2020 elections: a call to action

Drug policy reform must define the U.S. 2020 elections: a call to action

Drug policy reform must define the U.S. 2020 elections: a call to action 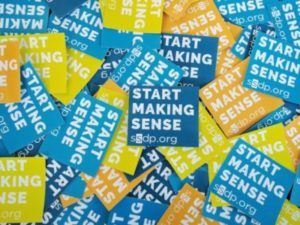 Young people are the largest voting generation in the United States, and in 2018 we outpaced Boomers for the first time ever in voter turnout (during a midterm election, which has lower turnout rates than general election years). Youth-led organizations like Students for Sensible Drug Policy, Sunrise Movement, and Extinction Rebellion will go down in history as the movements which demanded that we act now to save our society, our planet and our future. If you have ever wished that you could have been part of the 1960s counterculture movement, recognize that half a century later, it is the War on Drugs and climate change which encapsulate the existential geopolitical crisis we currently face.

Incremental policy change has served the drug policy reform movement well. As of summer 2019, we have built up incredible momentum: the government is under growing pressure to legalize cannabis federally, psychedelic decriminalization is advancing in cities across the country, clinical use of psychedelics has been fast-tracked through regulatory hurdles, and overdose prevention sites are within arm’s reach. Continuing to play by the incrementalist handbook is an attractive option, but I ask that we, as a movement, think bigger in 2020.

Drug policy is a powerful litmus test by which to judge a politician. There are virtually no sociopolitical issues that are untouched by the War on Drugs, and there’s a whole new generation of political candidates who are philosophically with us but are unsure on a policy level. Many of these individuals would like to be on the right side of history and would benefit from advisement from the drug policy reform movement.

We, the victims of the War on Drugs, orphans, and activists, must be the ones to define the Drug War Armistice with a platform based on human rights, social justice, and harm reduction. Upon this foundation, we can identify post-prohibition pillars which begin to deconstruct the War on Drugs. Drug Policy Alliance has identified five Bold New Solutions to #EndOverdose, and SSDP-led youth support for this platform is a key element of our 2020 strategy. Our movement must define the end of the War on Drugs, and we must also begin to envision our post-prohibition world. If you have thoughts on this, you are invited to submit them using this form.

I will be attending Sunrise Movement‘s Southern Summit in a couple of weeks, and would like to invite other drug policy reformers and harm reductionists to connect with their local climate action hubs. There are overlapping interests and concerns between drug policy reformers and climate activists, and part of meeting people where they’re at is attending potential ally meetings to determine where we can build power together. This can look like a lot of different things, and the Inter-Chapter Collaboration Committee will be putting together a community organizing-focused call in the coming weeks.

This is a complex conversation, and the committee invites all members to join the August Inter-Chapter Collaboration Committee call on September 11 at 9pm EST. The full committee call will include an overview of all working groups, with the 2020 US Working Group conversation centered on refocusing the intention of the working group. Details about the call, including the full agenda and how to join, can be found here.