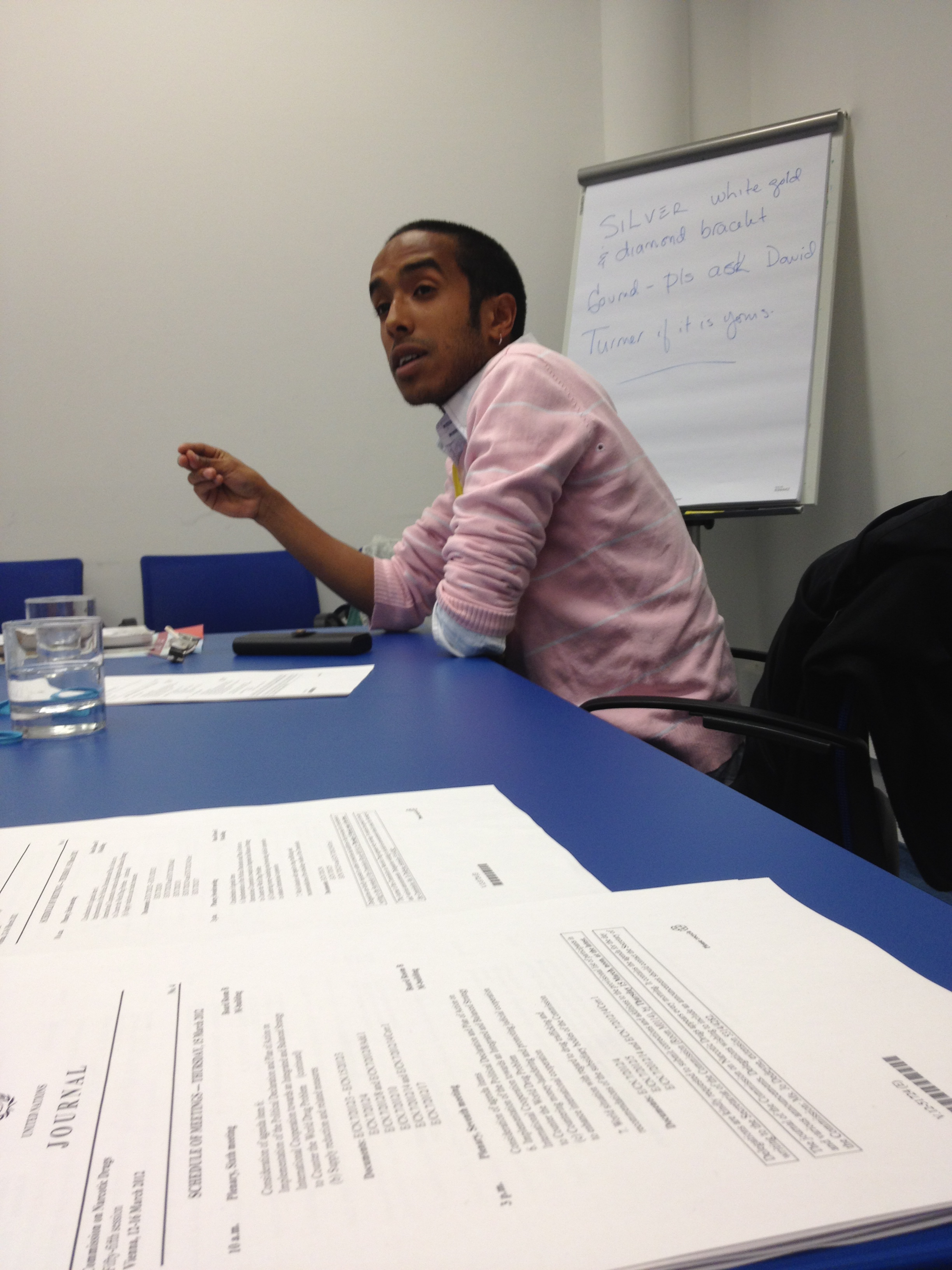 At the Madrid Airport, the pc that a friend lent me stopped working. It was kind of funny, I mean, travelling was an exciting concept, and maybe that poor machine couldn’t handle that kind of stress. Not only was this my very first trip to Europe, the purpose for travelling was exciting in and of itself: attending the 55th meeting of the United Nations (UN) Commission on Narcotic Drugs (CND). What is that, you ask? That is the place were international drug policy is made at the highest level. The Single Convention on Narcotic Drugs is the document that endures as the cornerstone of global drug policy, and was adopted by all UN members. In the local context this can be a major obstacle to reform national drug policies, the reason being that many times national governments are afraid: if they reform their own drug policy in any way outside the parameters of the Single Convention they could be banned from the international agreements made in the UN. This is not an unfounded fear, as recent history has shown us in the case of Bolivia and their attempt to endorse the Single Convention with a reserve concern on coca leaf for cultural use. Simply put, the UN is where real decisions are made. An explicit problem with the way the CND works is that, from my point of view, there are first world countries, second world ones and so on. A lot of people say that CND is just a framework to maintain drug policy as it is, not to think about resolving the problems that the policies generate. Long story short: the United Nations in general and the CND in particular have no interest in reforming (or even resolving) the problems caused by the failed worldwide war on drugs. That’s the reason why many international activists and drug policy reformers considerthe UN to be a bunch of bureaucrats with blue ties and grey coats with no interest in the real world. They are only, say the UN-skeptics, a higher level of hypocrisy (which they call ‘diplomacy. I partially agree with this statement, nonetheless, I think that the actual conditions of policy-making in times of globalization make the UN, the place to be and if we are interested in real change, it’s important to be there and try to participate (even if it is very very difficult). The politically incorrect joke: The dictionary game, dealt Iran and Israel a bad deal: they sit side by side. At the CND, this was not the case but they do at the International Atomic Energy Agency (IAEA). I guess it must be hilarious to see how they fight separated by two meters. Can we really participate in UN reunions? In my experience there is no easy way of answering that question. First of all, the nature of the work at the CND makes it very difficult for NGOs to engage in real world decisions. Only delegates from the different member states can participate with voice and vote. The NGOs, you may say, are only there as civil society observation and nothing else. And if you are there as part of an NGO of students, you may have even less opportunities to participate because of age discrimination. Even if you can speak with the delegation of your own country, that’s no guarantee that your voice will be heard. I mean, it’s possible that your country delegates think that you are only a boy who asks a lot of questions but “doesn’t understand anything about how the real world works’. At least, that was my case during the first two days of the meeting. I searched for the Colombian delegates (one of the largest delegations with almost 20 people) and I spoke with them about Colombian drug policy. I really thought that I knew more about our national drug policy that they believed. Only during the fourth day (and because we accidently met at the lunch of an important international NGO) did they speak to me like a peer.. And that chat only reaffirmed the official position of the Colombian government: we have our own voice, but we speak in a low voice. What are the final results of the CND meeting? Are there any? Actually there is one: the resolutions. These documents form the framework of recommendations for all member states of the UN. The resolutions must be agreed upon by consensus (rather than being voted for). This is a problem, because resolutions proposed by one country (say one with progressive drug national policies) is not accepted by other member states, or worse, it is accepted only after cutting the most polemic (often meaning ‘the real progressive’) parts. Don’t get me wrong: I think it is very important for young people to get involved in these kinds of spaces. Two or three people who don’t truly understand the real world context shouldn’t make the policies that rule our countries.  They often speak of realities that they don’t know and possible don’t care about. We, the young people, students, even drug users, must be part of the global drug policy reform movement. That’s the only guarantee to making our voices heard. Colombia in particular must have a major role in the debate about reforming current drug policy. The war on drugs, in Latin America in general, and in Colombia in particular, is one of the roots of major social conflict in the region, and one of the major obstacles to improving the quality of life in our country. I know that I will try to participate again in the CND. Only next time I hope to do more. I cannot dismiss the possibility of working with my government and trying to work together on a resolution. That’s one way of changing the world.