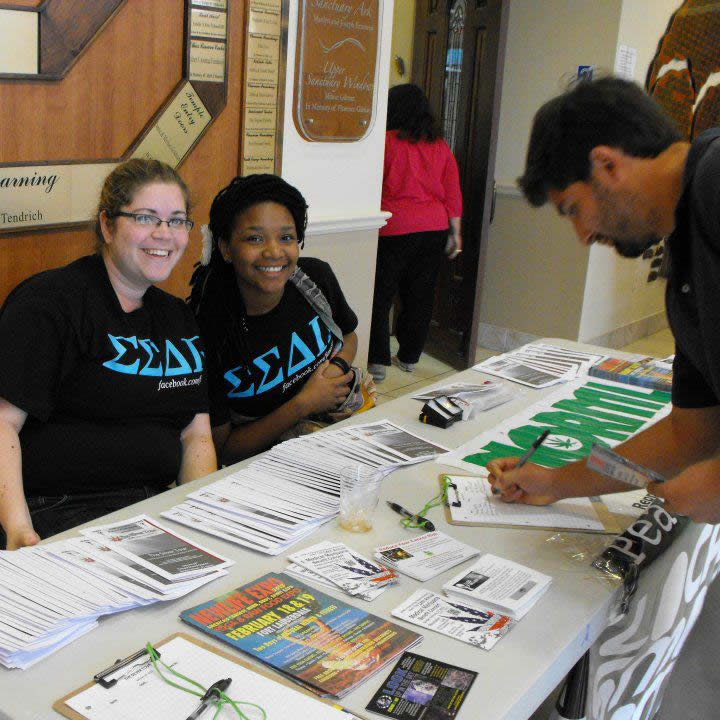 SSDP students have been hard at work all across the sunshine state, working to change impractical policies on state and campus levels. Here are some updates of what our Florida chapters have been up to: LEGISLATIVE HIGHLIGHTS 911 Good Samaritan Act of Florida (SB 278) Florida’s 911 Good Samaritan Act is designed to save lives; when someone in America overdoses, a call for help is made less than 50% of the time and fear of police involvement is the most common reason for not calling 911. This law protects people who seek or obtain medical assistance from prosecution for possession of a controlled substance. The bill was filed on September 19, 2011, signed by Governor Rick Scott on Friday, April 6, and will take effect October 1, 2012. For more info on Florida’s 911 Good Samaritan Act, read our blog post here:http://ssdp.org/news/blog/saving-lives-in-florida Medicinal Use of Cannabis (HJR 353 /  SJR 1028) Last year, SSDP students at the Florida Atlantic University Chapter joined forces with NORML of  Florida in order to successfully advocate for the first ever medicinal marijuana bill in the Florida House. The bill, which had been filed on November 18, 2011, unfortunately died in the Health Regulation committee. If the Medicinal Use of Cannabis Bill was to pass the legislature, it would have allowed Floridians to vote on whether or not to permit patients in Florida to have access to marijuana as a therapeutic alternative or in addition to prescription medication. Sentencing of Inmates (S732 / H561) The Sentencing of Inmates bill seeks to accomplish major reform in mandatory minimum sentencing law in Florida, specifically for drug trafficking and the amount of prescription narcotics necessary to be charged with possession. The Bill was filed on October 27, 2011, however it died in the budget committee before the majority of Legislators had an opportunity to vote on the measure. The legislation will be submitted again next year and should gain more traction after the upcoming elections. CHAPTER HIGHLIGHTS University of Miami 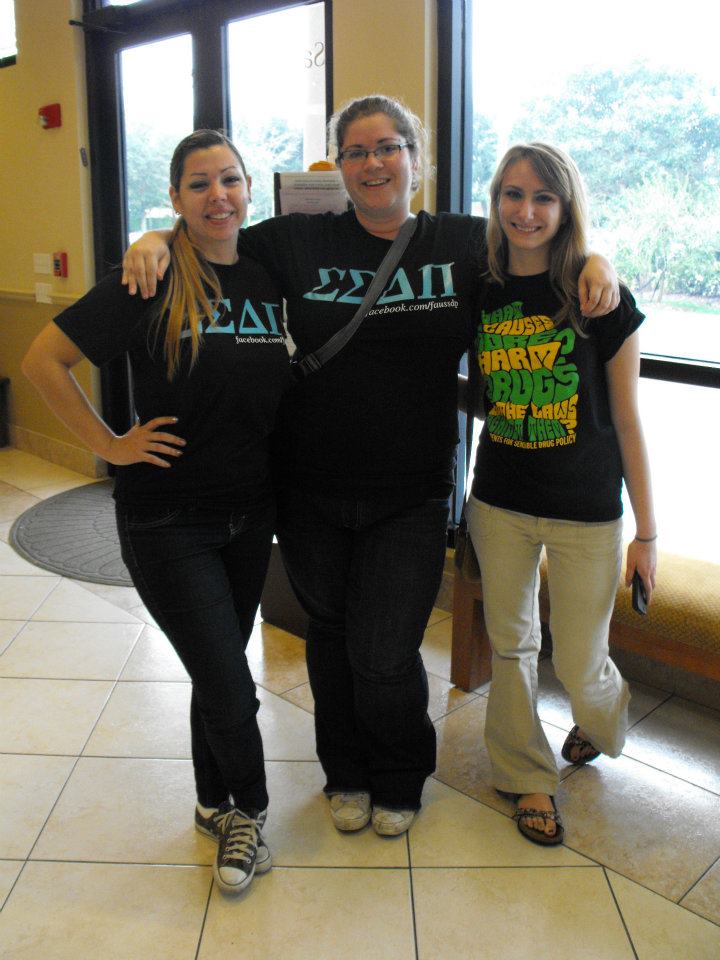 Our chapter at the University of Miami has been working to implement a Call 911 Good Samaritan Policy on their campus since the end of the 2011 Fall semester, when they first met with the Dean of Students. Since that meeting, wherein the Dean of Students essentially said that the administration thought the policy was legitimate but they don’t think it is necessary at the University of Miami and they requested that the SSDP chapter prove that it is. The chapter has been reaching out to other student organizations for official support and to assist in the effort to collect both petition signatures and student survey responses so that they can “prove” that this policy is indeed necessary. A bill to support the policy is currently being drafted by the President of the Senate of the Student Government, and the chapter has already secured the Panhellenic Council’s support. “We are continuing to reach out to Fraternities, Sororities, and other student organizations in order to garner more support for the Student Government bill and to enlist their help in collecting survey data. Our goal is for the administration to commit, by the end of the spring 2012 semester, or at the latest by Fall 2012, to include the policy into the Student Code of Conduct Handbook.” -Alfred Kilzi, chapter President Florida State University The Florida State University chapter’s most recent accomplishment is the passing of Florida’s 911 Good Samaritan Act. The chapter penned and sent out an op-ed to a multitude of Florida news outlets, urging Floridians to contact Governor Scott and voice their concern for him to sign this vital piece of legislation. Now that the bill has been passed and signed, the chapter is working on writing formal letters to all universities in Florida asking that they revise their student conduct codes to bring them into line with the new statewide law. “Our chapter has been intimately involved in the Good Samaritan Act for the past few years, and its recent approval has lifted our spirits and inspired us to continue advocating for sensible, harm reduction legislation in the future.” – Cody Swingle, chapter President University of South Florida “Our chapter’s first semester was extremely exciting and productive. After getting in contact with SSDP national staff, I am proud to say that our organization flew through the sometimes cumbersome bureaucratic process (in just a few weeks!) to become an officially recognized student organization at the University of South Florida.” – Evan Eisenberg, Chapter President The first campaign the chapter decided to take on was implementing a Call 911 Good Samaritan/Medical Amnesty Policy at USF, adapting university policy to better mesh with Florida’s 911 Good Samaritan Law and making sure all USF students, on campus and off, are protected. The chapter has been extremely successful in gathering support from administrators; their efforts paid off when the Dean of Students called for the creation of a formal committee to draft the policy. Chapter President Evan Eisenberg was invited to be a part of the committee as a representative of SSDP, and in fact is the only student on the committee, which illustrates the administration’s regard of SSDP and their eagerness to work with the chapter. Evan drafted a Call 911 Good Samaritan/Medical Amnesty Policy with the help of members from the USF chapter, SSDPers from other chapters and local Good Samaritan Jeffrey Cece.USF attorneys and administrators are currently reviewing the policy, and the response so far has been positive. The chapter has yet to encounter any major opposition to the policy, and it looks like USF will have the policy in place by the start of the fall 2012 semester or sooner. “Our work on the Call 911 Good Samaritan Policy is just beginning as we start to plan out how to educate students and law enforcement on the policy. With the passage of Florida’s 911 GSP and the widespread support for Call 911 Good Samaritan Policies on Florida campuses, I think it is more important than ever for SSDP chapters in our state to continue growing and working together on greater and more challenging goals, such as advocating for the legalization of medical cannabis, for example.” – Evan Eisenberg, chapter Founder and President Florida Atlantic University Our chapter at FAU started off the 2011-2012 school year by lobbying school officials to modify the punitive processes for students charged with marijuana possession in university housing. Students can now appeal any dismissal from housing after being removed due to charges of marijuana possession in student housing. The chapter also led a campaign to educate students about their rights to privacy in order to prevent further unnecessary student dismissals from housing. 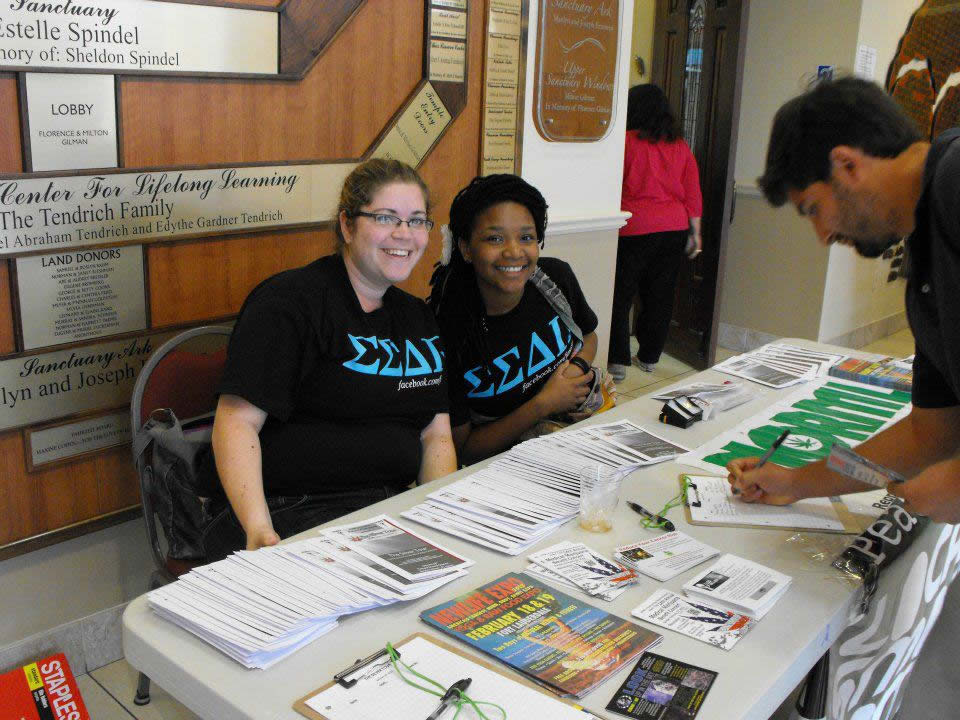 More recently, the chapter has begun negotiations with school administrators to discuss the most effective means of administering a Good Samaritan at FAU. In response to a severe hazing incident that involved an FAU fraternity and nearly cost one student his life, we took it upon ourselves to make this life-saving measure a hot topic on campus. We proposed a bill, which passed unanimously, in the Student Senate calling for a Call 911 Good Samaritan Policy at FAU.” – Sabrina Korenblyum, Former Chapter President   University of West Florida Our chapter at UWF is wrapping up their first semester of successfully organizing an SSDP chapter down at the tip of the Florida panhandle. They hit the ground running, recruiting members and building relationships with other organizations on campus, including the Criminal Justice Student Association and College Republicans. The UWF chapter has made it a goal to build ties with their student government and speak out on the issues at hand whenever possible. As a much smaller campus, the UWF chapter faces many challenges in retaining membership. Their main goals is to continue to educate and recruit members in unique ways and work with other student organizations to ensure a 911 Good Samaritan policy is drafted into the UWF Student Code of Conduct by the fall 2012 term. -Ethan Watters, chapter President   Florida International University Our chapter at FIU has definitely seen adversity in its first year. It has been difficult for the chapter to find an advisor who is able to commit. They are still in the process of finding one. Regardless, that won’t stop their progress; the chapter’s first goal: introducing a 911 Good Samaritan Policy at FIU. Chapter founder and President Laura Gonzales plans to use the summer months ahead to get the SSDP name out there and start recruiting for fall 2012. – Laura Gonzalez, chapter President