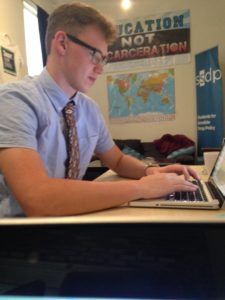 Daniel Miles is joining the SSDP staff as the Summer 2016 Policy Intern at the SSDP National HQ in Washington DC. A North Carolina native, Daniel joined the SSDP chapter at the College of Charleston in 2014 on his fourth day of college and has not looked back! As an integral chapter member, he helped organize and execute the Southeast Regional Conference in April of 2015. Later that semester, he became Chapter Leader and then Vice Chapter Leader after he took the helm of another campus organization. Since Daniel became a leading member of his SSDP chapter, they have been one of the most well-traveled chapters to SSDP International conferences, bringing about a dozen students to SSDP2014 and SSDP2016. Daniel is intensely interested in drug policy. Receiving a good deal of criticism and bullying as a young child, Daniel cares a great deal for how people are treated, especially those who are cared for least. SSDP offers him an avenue to work directly for those seen outside the seams of society, inmates, and those victims of a indifferent criminal justice system. During his time with SSDP, he will be planning a Support Don’t Punish Day of Action for Washington DC, collaborating with staff members on an update of the SSDP Campus Policy Gradebook, and contributing to the SSDP “Just Say Know” Peer Education Program. He looks forward to the summer and beyond as a devoted member and occasional staffer for SSDP! Outside of SSDP, Daniel is an avid writer, reader, hiker, hammocker, and conversationalist. He writes for The Rival, a student-led alternative campus publication; has hiked and backpacked all along the eastern seaboard; has and continues to read regularly and voraciously, and is always ready to take on challenges that he faces.