HomeBlog Here Is Everything that Happened During UNGASS Week

Here Is Everything that Happened During UNGASS Week

Here Is Everything that Happened During UNGASS Week

Category: Blog | international, UNGASS, United Nations | May 6, 2016 By Jake Agliata No comments yet

The long-awaited United Nations General Assembly Special Session (UNGASS) was a victory on paper for defenders of the status quo, but it’s clear that overall support for the international drug control regime is rapidly decreasing across the world. The weak outcome document, finalized last month in Vienna by the Commission on Narcotic Drugs, was adopted on the first day of the session and immediately became a target of frustration for civil society members expecting more substantial change. Member states who do not have a permanent mission in Vienna, and who therefore were excluded from providing input into the outcome document, were equally frustrated that their calls for reform were ignored. The strong responses by civil society and member states whose opinions were excluded from the document demonstrated that a large portion of the world is ready to move on from the War on Drugs and embrace an approach to drugs grounded in human rights, scientific evidence, and harm reduction. Although many advocates for reform left UNGASS feeling frustrated and disappointed, this week also proved that the global consensus on drug control strategies is unraveling at a rapid pace, paving the way for more substantial reforms to come in 2019.

Energized by SSDP 2016, over 150 students traveled to New York City on Monday, April 18th to participate in a demonstration intended to amplify the youth voice on the eve of the UNGASS. With signs, chants, and soapbox speeches, we let the UN know that if policies are going to be enacted in the name of protecting youth, then youth deserve to be included in the conversation. Drug Reporter captured some excellent video of the demonstration, and other pictures can be viewed here. In addition to our demonstration, the Caravan for Peace, Life, and Justice held an event at Foley Square earlier in the day in which members of the caravan, made up of activists traveling from Honduras to New York for UNGASS, shared their stories about how the drug war has negatively impacted their lives and communities. Right before our event, Moms United Against the Drug War held a storytelling event where families shared powerful stories of loved ones they have lost . A delegation of 30 young drug policy reformers, comprised of members of SSDP along with our global youth allies, also spent the week inside UN headquarters for UNGASS. Over the past several years we have worked tirelessly to ensure the youth voice was properly represented at this potentially transformative meeting on global drug control policies. We were given the impression by UN member states that the UNGASS would be an open, inclusive, and impartial avenue to discuss much-needed reforms to the global approach to drugs and that there would be a place at the session for young people to share their own experiences. Instead, what we experienced was a disorganized mess of a session that saw our delegation repeatedly ignored and insulted. 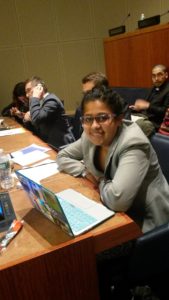 Emma Rodriguez Romero, an SSDP chapter leader from Mexico, waits patiently for an opportunity to make an intervention during a roundtable during day one of UNGASS.

Here are just a few of the issues SSDP students and our allies faced when trying to speak out. For a more detailed summary, check out this great article by SSDP Board Member Sarah Merrigan: While the end results of UNGASS were not favorable, to say the least, there were still some positives to take away from the session: We were also able to get 100 endorsements onto our Global Youth Coalition Consultation, which we released in March during the Commission on Narcotic Drugs meeting in Vienna. This consultation outlines the specific recommendations of global youth towards the international drug control system. We were able to get it into the hands of several people during the session, including a member of the UNODC Youth Initiative and a representative from UNICEF we met with. 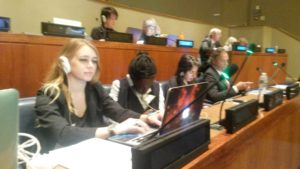 SSDPers hard at work inside the UN

Perhaps the biggest positive takeaway from UNGASS was the unprecedented level of participation by civil society both inside and outside the session. Hundreds of representatives from NGOs all around the world were present in New York to express a unified desire to move on from the drug control regime. Some of the highlights include: Based on the activity both inside and outside by civil society at UNGASS, and the growing frustration of many member states that certain reforms have not been enacted, it’s safe to say that the global consensus on drugs is falling apart at the seams. The last UNGASS on drugs in 1998 centered around the idea of creating a “drug-free world”. This time around, there were only a handful of countries clinging to the idea that a drug-free world is an achievable goal. More and more countries are rallying behind the idea that a public health, harm reduction-based approach to drugs is the best way to protect children, provide support to people with addictions, and stop the harm of a racist criminal justice system. UNGASS proved that a unified voice for reform can win if it’s loud enough and that the global movement to end the drug war is only going to grow stronger. As we move on from UNGASS and begin to prepare for the next big UN meeting on drugs in 2019, it’s clear that this movement will grow louder and stronger until UN leaders start making sense and the drug war is smashed at the foundations.