Written by Sara Velimirovic, SSDP UNGASS Coordinator Intern and Ambassador at the Paris Institute of Political Studies Sciences Po A heroin epidemic is rampaging across Russia, and President Vladimir Putin seems to be dealing with this issue through a drug-war-like strategy. In other words, he is adding fuel to the fire while ignoring a smarter way to deal with this public health crisis. Nearly six percent of Russia’s total population (8.5 million people), are drug addicts or regular users, making it the world’s leading heroin using nation per capita. One of the most shocking statistics is the rapid increase in drug-related mortalities. Drug related deaths rose from 30,000-40,000 in 2012 to a 100,000 deaths in 2013, a 270 percent increase. The HIV epidemic related to needle sharing is also on the rise, while addicts of the new, infamous drug krokodil now number as many as 100,000.   While it’s clear that Russia is facing a huge public health crisis, the Kremlin’s response offers little hope for improvement. According to a Brookings Institution study, Russia’s drug policy is not only largely ineffective, but also steeped in the narrative of nationalistic paternalism focused on rhetoric rather than action. 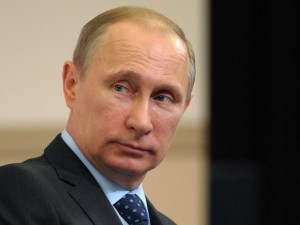 Russian President Vladimir Putin is not helping Russia’s heroin epidemic with his harsh stance on drug policy and treatment.

On the other side of the globe, the response to United States’ “worst drug addiction epidemic” in history has incited many to rethink the traditional policy responses. States like New Mexico, New York, Rhode Island and Vermont recently allowed the dispensing of Naloxone as a medication used to counter heroin overdose. Coupled with a successful needle and syringe exchange, these services fall under the umbrella term of “harm reduction,” a movement aimed at reducing negative consequences associated with drug use.   This approach is gaining more and more traction, and the Acting Director of the Office of National Drug Control Policy Michael Botticelli emphasized the importance of treatment at the Harm Reduction Coalition conference last year, a dramatic tide shift given the history of US federal policy towards drugs.   Although the approach of harm reduction—as opposed to the criminalization of drug users— could save many Russian lives, Putin has recently doubled-down on his strategy by reprimanding “some” countries for their “relaxed laws” on drugs. It seems that his reputation as an ever-defiant international underdog might impede the adoption of a more sensible approach to the drug epidemic. Unfortunately, the Kremlin frames the heroin epidemic as a geopolitical issue, where the involvement of the US in Afghanistan is seen at best to have had a negative effect on Russia, and at worst, to be an orchestrated, malignant effort by the West. The Russian drug tzar, Viktor Ivanov, recently made a direct link between foreign policy and the heroin epidemic by stating that “since the start of Operation Enduring Freedom, Afghan heroin has killed more than one million people in Eurasia, including at least half a million Russian citizens.”   As on many issues, Putin prefers a strong Russian stance that defies “the West” in order to maintain strong public support. He is unlikely to support a harm reduction approach, which has been criticized by the powerful Russian Orthodox Church as condoning “immoral behavior.”   But a public health-oriented approach for Russia could be adopted under the radar. Ivanov has suggested a policy shift by using treatment instead of criminalization to deal with the crisis. Although underreported, Ivanov’s statement could provide grounds for reducing crime rates by decriminalizing small amounts of drug possession and possibly shift Russia in the right direction. The persistent problem with populist anti-drug rhetoric will likely impair Putin’s efforts to address the public health crisis. Perhaps the subdued effort of his advisor will improve the health and lives of at least a few of the shocking numbers of sufferers.