HomeBlog It's just a softball game …vs. the Drug Czar's team

It's just a softball game …vs. the Drug Czar's team 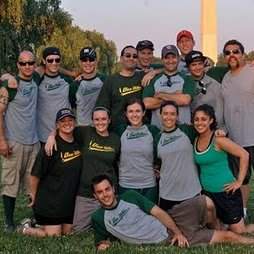 SSDP is the official sponsoring organization for The One Hitters, a co-ed recreational softball team in the Congressional League in Washington DC, established in 2002 our team is comprised of individuals who work for or support marijuana and other drug law reform. This year, we’re officially 2-1 so far, but if I do say so myself, we’re not too shabby. Being in the Congressional League, we play some interesting teams, such as those who work for various Congressional offices, government institutions, advocacy groups, law firms, and others. Perhaps the most unlikely match up for a league softball game would be The One Hitters vs. The Czardinals, which is the Office of National Drug Control Policy’s team. We were thrilled earlier this season when our respective coaches scheduled a game between the two teams! But then for some reason, The Czardinals cancelled on us …again.

The One Hitters is a co-ed softball team established in 2002 in the Congressional League in Washington, DC comprised of individuals who work for or support marijuana and other drug law reform.

contact: OneHittersSoftball@gmail.com FOR IMMEDIATE RELEASE May 25, 2011 One Hitters Burned Again By Timid Czardinals Office of National Drug Control Policy Backs Out of Softball Game with Drug Policy Reformers WASHINGTON, D.C. – Once again, the softball team representing the Office of National Drug Control Policy (ONDCP) has backed out of playing a Congressional Softball League game against the One Hitters, a team consisting of members of several drug policy reform organizations and others who support ending the “war on drugs.” A game between the two teams had been scheduled for May 25, but the ONCDP Czardinals pulled out shortly after scheduling the game, with ONDCP public liaison coordinator Quinn Staudt citing an “accidental double-booking.” This is not the first time the Czardinals have refused to play the One Hitters. In 6 years, the team found one reason or another to avoid taking the field against this team of individuals dedicated to reforming the out-of-date and ineffectual policies promoted by the ONDCP. This behavior is being mimicked on the national stage by the ONDCP as well. While drug czar Gil Kerlikowske has stated that he will no longer use the rhetoric of a “war on drugs” and President Obama said that he wants to move to treat drug abuse as a health problem rather than a criminal justice problem, little has been seen in the way of action in that direction. The President has also said that he does not support the legalization of any drug, even marijuana, despite the inarguable damage marijuana prohibition does to society, individual users, medical patients that benefit from marijuana treatments, governmental budgets, and respect for the rule of law. “It is really disappointing that the ONDCP not only refuses to have an honest debate with drug policy reformers about the absolute failure of drug prohibition, but also keeps ducking out of softball games with us,” said One Hitters team captain Jacob Berg. “We think it would be a great opportunity to advance the discussion between drug law reformers and the people ostensibly in charge of drug policy in this country. I wonder if they are afraid to have that conversation. The drug czar said ‘legalization’ isn’t in his vocabulary, but it’s just a friendly softball game!” The One Hitters hope the Czardinals will put aside ideological differences and accept their invitation to play a softball game this summer on the National Mall in Washington, DC.