This blog post originally published on http://the-libertarian.co.uk. Medical marijuana, though not entirely new in Israel, is apparently still a point of contention among some in the country. Dr. Leonid Eidelman, chairman of the Israel Medical Association, has expressed strong opposition to a proposal to treat marijuana like other prescription medications. The proposed bill, introduced by two members of the Knesset for the right-wing Likud party, would simply allow every physician to prescribe marijuana whenever they considered it appropriate. “We often hear of family doctors,” Eidelman claims, “who are threatened with verbal and even physical violence if they do not prescribe medical marijuana,” he said. “This situation is insufferable, and the bill will only make it worse.” In other words, giving patients a medicine they are desperate for would somehow make their desperation worse. Perhaps Eidelman still believes that marijuana drives its users to violence. On the contrary, along with the well-known calming effects of the drug, cannabis shows promise as a treatment for those suffering from long-term psychological effects of violence. Recent research from the largest mental hospital in Israel deals with the use of cannabis for Post-traumatic Stress Disorder (PTSD). Study subjects were combat veterans who suffered from chronic and severe PTSD. They were instructed to use cannabis on a daily basis. Preliminary results show significant improvement 1 in PTSD symptoms, although several follow-up sessions confirmed that the patients still qualified for a diagnosis of moderate to severe PTSD. An estimated 200 patients with the disorder are currently receiving cannabis. Israel has been notable in connection with medical marijuana arguably since 1964, when an Israeli scientist first isolated the plant’s main active ingredient, delta-9-tetrahydrocannabinol (THC). It was not until 1999, though, that the Ministry of Health began issuing licenses for medical marijuana use, and not until 2005 that the ministry authorized a supplier of the substance. The number of patients with such licenses expanded rapidly after the release of an Israeli documentary on the subject, Prescription Grass,2 in 2009. 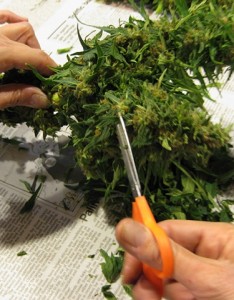 More recently, Israeli researchers with the company Tikkun Olam have created a strain of marijuana almost entirely lacking in THC but very high in cannabidiol (CBD). This less well-known compound causes no “high” and does not stimulate the appetite, but shows promise in treating a variety of conditions, including schizophrenia, seizures, and anxiety. Currently, a government program called MECHKAR distributes marijuana to about 12,700 patients with a variety of disorders, including cancer, multiple sclerosis, Parkinson’s disease,  and the chronic pain associated with these and other conditions. However, marijuana can only be legally prescribed by about 20 doctors in Israel, and can only be used  after all other treatment options have been exhausted. Even then, there is a limited list of conditions for which cannabis can be prescribed. Some doctors are even limited by law to prescribing cannabis oil, rather than the plant material itself. Patients often find there is a lengthy bureaucratic process to go through in order to get the necessary license to use the drug. The ongoing restrictions on this “dangerous” drug, as pointed out in the recent  documentary on the subject, are particularly absurd considering the alternatives. Patients with chronic pain would generally be offered opioids, drugs similar in pharmacology and effects to heroin, which rightly has more of a reputation for addiction than marijuana. Unpleasant side effects are also relatively common for antipsychotics and the standard Parkinson’s treatment Levodopa. Marijuana has led patients in one recent study to cut down their intake of these and other prescription drugs significantly, while the herb itself produced no noted negative side effects. Despite all this, Eidelman questioned not only the well-established efficacy of medical marijuana but even its safety. There is reason to suspect that such extreme anti-drug voices have little influence on the issue, however. A recent survey done as part of a study by the Jerusalem Institute for Market Studies showed 75% of respondents agreed with the statement “marijuana has legitimate medical uses.” This is comparable to results in the United States, where medical marijuana is legal in 20 states and the District of Columbia. An Israeli rabbi recently ruled that medicinal use of cannabis is kosher. Even the country’s Anti-Drug Authority has made statements in favor of the medical use of cannabis. Although public support for broader legalization is more limited, at an estimated 26%, there is every reason to believe that medical cannabis will have a lasting place in Israel.