Category: Blog | alumni, alumni association, conference, the wets | May 20, 2016 By Stacia Wallis No comments yet

This blog post is part of the SSDP Alumni Association spring membership drive series. Join us today!
As evidenced by Rachelle Yeung ’11 the SSDP network has an overwhelming sense of love, community and weird to offer its members. SSDP national conferences are an annual manifestation of this incredible spirit. Any student, alumnus, or supporter who has attended a conference is sure to agree that the event has played a formative role in their professional aspirations. The conferences educate and empower students while bringing the international network together. Conferences are energizing, informative and above all else, inspirational. The necessity for a social mixer at these conferences brought about the necessity for entertainment.  In the past bands like Roots of Creation have been commissioned to perform. 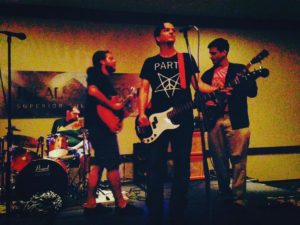 The band settled on a name, The Wets, pays tribute to those who fought against alcohol prohibition in the 20s and 30s. According to Wikipedia, “Prohibition supporters, called drys, presented it as a victory for public morals and health. Anti-prohibitionists, known as wets, criticized the alcohol ban as an intrusion of mainly rural Protestant ideals on a central aspect of urban, immigrant, and Catholic life.” Appropriate indeed.

As with any great rock band, some of the history of The Wets is shrouded in myth and clouded recollections. The story begins with a heroic trio of Mike Liszewski ’07, Chris Wallis ’07 and John Decker ’05. The first time I met Chris Wallis was at the 2010 Midwest Regional Conference at Kent State in Ohio where Chris performed with his early outfit, Professor Greenhouse and has become the go-to-guy for SSDP’s video production needs. Decker is the booming, recognizable voice of group chants at conferences and Mike is a punk & rock encyclopedia who works for Americans for Safe Access and also fronts a band known as ‘Stop Worrying and Love the Bomb’.  No strangers to the spotlight, they were the perfect candidates to take initiative and fulfill the need of lively entertainment at the next conference social.
As far as Chris can recall, Mike Liszewski pitched an idea to Chris and Decker that the three of them should devise a small set list and scrape some equipment together for the SSDP conference in Denver in 2012. With a bit of practice,  they could pull off a real show for their friends and supporters in SSDP. Chris loaded up his Subaru and drove nonstop from Ohio to Colorado, while Mike and Decker saddled up a 747. Legend has it that the band was forced to play through the hotel ballroom ceiling speakers after some technical malfunctions, but crushed it nonetheless. Four years of technical difficulties later The Wets have played to packed ballrooms, basements, and bars in Colorado, D.C. and Virginia, almost always without pay (though pizza and beer have been provided on occasion).
The Wets have been able to succeed in part due to their monstrous hearts and ability to throw a fiery show together. A greater force, however, has fostered The Wets’ in their form and function. This would be the immensely supportive atmosphere SSDP has created for its members. Mike, Chris, and Decker recognized a need for entertainment at the conferences, but instead of spending time booking a band or staging a self-serving performance, The Wets have worked hard to find a model that would entertain and engage their audience of peers. “I never thought I’d be coordinating with friends across the country to devise and practice a full band set. We have gotten tighter and are getting better at crafting diverse, crowd-pleasing set lists, which is what we set out to do in the first place,” says Chris, “even if it has turned into a shit show once or twice.” The loving and supportive audience provide energy for The Wets to feed from, ensuring a high-octane show that brings smiles and dancing wherever they play. 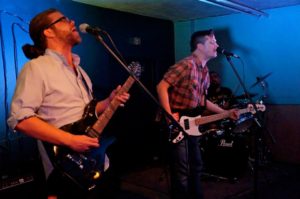 Chris and Mike of The Wets

The band has further engaged the audience by inviting many other SSDPers onstage for their gigs. The pool of talent that exists across the SSDP network is absolutely astounding. The guest appearances showcased at The Wets’ shows have been a grab bag of familiar covers,eyebrow-raisingg antics and pure, unadulterated Rock’n’Roll. SSDP Godfather Eric Sterling has sat in on a number of occasions for ‘Come Together,’ Lauren Padgett’s has twice let loose on an indomitable performance of Le Tigre’s ‘Deceptacon,’ and Devon Tackels’ memorable performance of Weezer classic ‘Say it Ain’t So’ bolstered SSDP’s collective, undying love for Devon.  If you get Victor Pinho and myself in a room together, buckle up and hold on to your mustache because we will undoubtedly make you sit through our ever evolving rendition of Shel Silverstein’s barn burner ‘The Smoke Off’.
The Wets have included:
Since the SSDP talent pool is immense and growing, the Wets continue to find room for other additions. If you can contribute entertainment to the social events, do not hesitate to reach out to the organizers. Stand up comedy, poetry, DJing/producing, interpretive dancing, Tuvan throat singing… Whatever your craft may be, it is undoubtedly welcome at the next SSDP conference in spring of 2017. If you have the desire to showcase some musical talents with the house band, let one of us know and we can coordinate. Fair warning: Mike Liszewski runs a tight ship, so bring your A-Game. That is OK because the stress and pre-show jitters will melt away instantaneously when Chris smiles at you and says “Just don’t suck” before you take the stage. And you do not suck. You rock.