HomeBlog My Experience at the International Cannabis Business Conference

My Experience at the International Cannabis Business Conference

My Experience at the International Cannabis Business Conference

Written by Lalitha Thirunagari, University of California Berkeley Co-Chapter Leader A few weeks ago I was given the opportunity to attend the International Cannabis Business Conference (ICBC) in San Francisco. Now being a college student, affording a seat to a conference like this seemed impossible. Thankfully, I was able to attend with Supernova Women, an organization that aims to create a space for women of color to enter the cannabis industry. My personal interest in the subject of cannabis began in 2010 during my sophomore year of high school. In a class debate on controversial topics, I had to argue why marijuana should not be legalized. At the time, I had known little about the subject, but as I began researching it I was amazed by how a plant that has caused zero deaths could be criminalized in the ways it has been. I became an advocate for cannabis and soon every project, paper, or presentation I had to do would be about the plant. With so much negative media bias and misinformation, I felt like I had to do whatever I could to change negative perceptions and stigmas people had about it. I researched everything from its history and the War on Drugs to its neurological and medicinal effects. I learned how the War on Drugs disproportionately affected communities of color and has led to the high incarceration rate of black and brown men that we unfortunately see today. 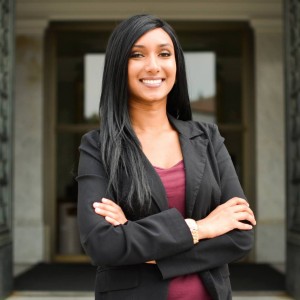 Former U.S. Surgeon General and keynote speaker, Joycelyn Elders, began the conference by addressing these issues in her speech and discussed how federal drug policies have been a failure in our nation. The first day of the conference was primarily dedicated to discussing the policies, laws, and regulations surrounding cannabis in both California and other states such as Colorado and Oregon. Speakers included congressmen, California assembly members, lawyers, and several prominent political activists in the field like U.C. Berkeley’s Amanda Reiman. Reiman currently serves on the Cannabis Regulatory Commission for the city of Oakland and is the Manager of Marijuana Law and Policy for the Drug Policy Alliance. She discussed how marijuana prohibition is a social issue and what is being done to see communities of color who were severely impacted by the Drug War are given “restorative justice” through legalization initiatives, such as the Adult Use of Marijuana Act (AUMA). A few ways she said California will be able to provide restorative justice and increase social capital in the industry is by wanting to be the first state to allow people with previous drug felonies to get licenses to work in the cannabis industry. Those who have a marijuana-related arrest will be let out of prison and can have their record expunged of the charge at any time they choose. Another positive provision is to earmark part of the tax revenue to go back to communities that have been affected. The city of Oakland, for example, will also have a provision that requires cannabis companies in the city to hire 50% of their employees locally from Oakland. California further aims to protect small growers by providing micro-business licenses, something other legal cannabis states like Colorado and Oregon have not yet done. These are a few ways that California aims to increase restorative justice for those who have been affected by the Drug War, none of which will be possible if the ballot initiative for AUMA doesn’t pass in November 2016. The second day of ICBC focused on the business aspects of cannabis, which included having investors, CEOs, and entrepreneurs from around the world come as speakers. One of the main agreements amongst all the business panelists was that people who are hopeful about entering the “canna-business” industry should do so for the right reasons. The right reasons being to create a positive perception of cannabis and to have philosophical values aligning with those of the activists’ who are against the drug war. This is not an issue for the many veterans in the industry today who have devoted a significant amount of their life fighting for political change and cultivating the canna-industry for decades. However, having the right values is key for new entrants since they should not be driven solely by green marijuana dollar signs, but by a legitimate passion to shape the industry in unique ways. Investors said it is easy for them to tell who is genuine and who isn’t, so anyone attempting to simply make some quick money should realign their core values and understanding of this industry. Doctor Andrew Sullivan, who has written extensively on topics ranging from civil liberties to human rights, was the keynote speaker the second day and shared his values about the industry and how we can create positive change. He believes one of the first ways to create a positive perception of the plant is by having more people “come out” of the marijuana closet. He shed light on the fact that one of the biggest inhibitors in the social movement to legalize cannabis is that so many people are still afraid to admit they use or have used cannabis. He urged coming out of the cannabis closet is crucial to breaking the negative stigmas people hold towards cannabis and its users. The reason it is important for us to break those stigmas is because the drug war and cannabis prohibition have been serious issues we’ve been facing for more than forty years in our country. Those who are anti-drug war activists understand these issues well, however, people who are still uneducated about the issues are quick to ridicule and shame marijuana by associating it with the negative stereotypes that have been created by media and government for decades. I distinctly remember how during a lunch break at the conference, a man outside the hotel laughed at a group of us attending ICBC because of the idea that there was an actual “weed conference.” Anyone who is well versed on the issues surrounding the drug war would have found this offensive, however, Dr. Sullivan made a key point in his speech by stating that it is our role as cannabis activists to not react or judge people who shame us, but to rather be patient and engage in a conversation with them about the issues. We must explain why the cause is important for the sake of social justice and why cannabis is a topic that should be taken seriously. Overall, the International Cannabis Business Conference was truly an unforgettable experience and one that I will cherish for the rest of my life. I was surrounded by my idols, drug war activists who have been fighting for cannabis for decades, the same individuals who I have researched growing up. There was so much positive energy in the room and you could feel how many people there were truly activists at heart. Being a part of that experience was unbelievable and I feel blessed to have met individuals driven by the same cause as me. This conference left me feeling extremely excited about my own future in this industry and the positive impact I hope to continue making with other like-minded individuals.