HomeBlog New Hampshire on Marijuana: Catching Up with New England?

New Hampshire on Marijuana: Catching Up with New England?

New Hampshire on Marijuana: Catching Up with New England?

This piece was originally published at http://the-libertarian.co.uk. The New Hampshire House of Representatives has narrowly passed a bill that would legalize marijuana in the state. If signed into law, this would put the “Live Free or Die” state ahead of the rest of New England on marijuana reform. Currently, New Hampshire is the only state in New England without a marijuana decriminalization policy in effect. Most of these passed within the past five years, including most recently in Rhode Island, although Maine passed a decriminalization bill in the 1970s. Such a policy was proposed and narrowly passed by the New Hampshire House in 2012, but without enough votes to overcome the threatened veto by then-Governor John Lynch (D). New Hampshire just last year became the 19th state with a medical marijuana law, after Governor Maggie Hassan signed the measure. It had previously been the only state in New England without such a law. The legislatures of Massachusetts, Rhode Island, and Vermont considered legalization bills last year without success, while New Hampshire also voted against a similar measure. Polls show, however, that such reforms are especially popular in the area compared to other regions of the US. 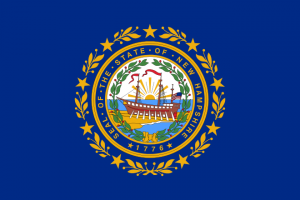 New Hampshire is lately seen as a swing state, unlike any of the other states in the region, which are more solidly Democratic. It has a very high percentage of independent voters, about 40%. In the 2012 presidential race, the state went to President Barack Obama, but by a narrower margin than anywhere else in New England. It is also the site of the Free State Project, a major effort by libertarian activists to migrate to the state and gain influence there. Success for marijuana legalization in New Hampshire, then, would further prove that although it is more popular with Democrats than Republicans, the issue is not merely a left-wing cause. It would also be a historic first; while Colorado and Washington passed their 2012 reforms through ballot initiatives, New Hampshire would be the first state to legalize marijuana through the legislature. New Hampshire has the earliest primary in the nation in presidential races, which is considered very influential. Perhaps the state’s drug policy reforms can have the same type of impact. Legalization in the state could prove influential on future candidates angling for New Hampshire votes. Governor Hassan has already promised to veto the bill, citing the “message” it would “send to young people.” Presumably Governor Hassan is referring to minors, making a traditional “think of the children” appeal also often used to oppose more modest decriminalization measures. Firstly, relevant research suggests that among US states, harsher marijuana laws do not tend to lead to lower use by teenagers, nor do more lenient laws lead to higher teen consumption. If there is a pro-marijuana message being sent to teens by marijuana policy reform, it does not seem to be widely received. Most importantly, speculation about messages is not as compelling as hard evidence on the harms of prohibition and the benefits of legalization. As Marijuana Policy Project representative Mason Tvert recently put it on Nancy Grace, “The fact is that the majority of Americans are on my side because your side can’t come up with a legitimate argument.” Image credit to wikimedia.org.