Written by New Mexico State Policy Intern Brett Phelps I came to law school with a goal of reforming New Mexico’s failed drug policies. At our SSDP Lobby Day on Tuesday January 26th I joined my fellow law students and advocates at the state capitol building in Santa Fe – or the Roundhouse, as we call it – to put what I’ve been learning in class into action. And what a lesson we got!   How New Mexico’s legislature works: To better appreciate the environment we are working in up at the Roundhouse this session, it helps to understand a little about the current state of New Mexico politics. New Mexico is a longtime democratic stronghold and also a majority minority state with a 58.8% non-white, largely hispanic population. Despite being in a heavily democratic state, Republicans followed the momentum of the tea party nationwide and in the 2014 elections won a majority in the House of Representatives for the first time since the 1950s. Democrats still hold a slim majority in the Senate, and we have a Republican governor who – although she parties and eats pizza like a Teenage Mutant Ninja Turtle – refuses to support efforts for sensible drug policy reform. Like Congress and state legislatures across the country, New Mexico politics have become increasingly partisan and bitter as of late. With every seat in the state House and Senate up for reelection this November, the political rhetoric is cranked to full blast this session, particularly from Republicans beating on their chests about how tough on crime they are. Fortunately we have at least as many stalwart drug law reformers as we have prohibitionists in the legislature, and this atmosphere led to many interesting conversations with lawmakers at our Lobby Day. 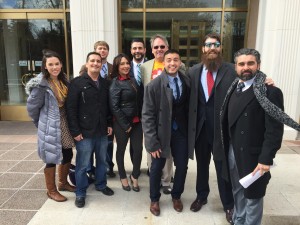