November/December 2016 Monthly Mosaic: Rodrigo Duterte, the Philippines, and the War on Drugs Internationally 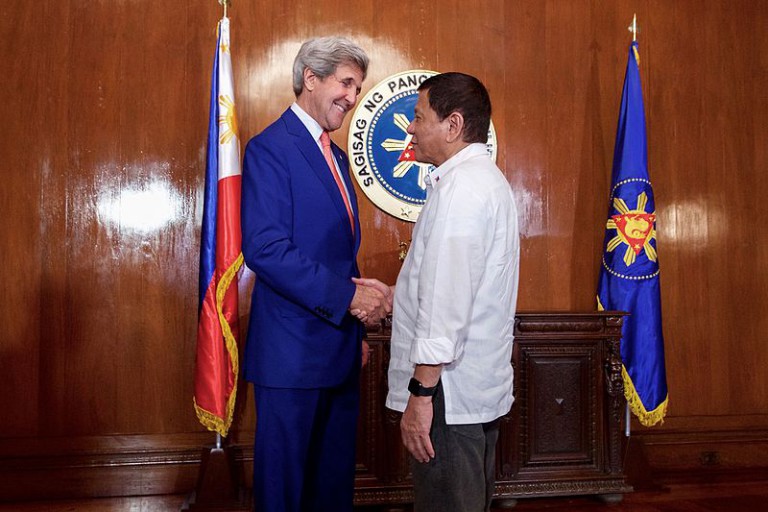 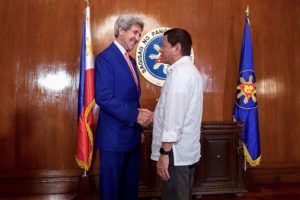 On May 9th of this year, Rodrigo Duterte was elected President of the Philippines in a landslide, thanks in large part to an aggressively pro-drug war agenda. Duterte campaigned on a “tough on crime” platform centered around a plan to offer bounties to those who turn in drug lords, dead or alive, and has since encouraged Filipino citizens take to the streets and kill suspected drug users and dealers, promising legal protection and rewards to those that did so.

“Do not destroy my country, because I will kill you.”

While still on the campaign trail, Duterte famously promised to kill 100,000 criminals in his first six months in office. Since he took office on June 30th, at least 5,000 people have been killed in the War on Drugs — 2,000 by the Philippines National Police, and 3,000 in extrajudicial or vigilante-style killings (killings by government officials or citizens with no legal basis). In July alone, over 60,000 individuals addicted to drugs voluntarily turned themselves into authorities, motivated by a legitimate fear for their lives.

SEE IT YOURSELF: Daniel Berehulak, a photojournalist, photographed 57 Filipino murder victims in a 35-day period. See his photographs here…

PUTTING THE PHILIPPINES’ WAR ON DRUGS IN AN INTERNATIONAL CONTEXT

The United Nations (UN) has condemned the extrajudicial killings encouraged by Duterte as “illegal and a breach of fundamental rights and freedoms,” and his administration’s actions have, in fact, violated both individual UN agreements and the Philippines’ human rights obligations as a member state.

Following the UN’s Special Session on the World Drug Problem meeting in April 2016 (UNGASS), the UN released an outcome document  that called for UN member states, such as the Philippines, to “prevent any possible acts of cruel, inhuman or degrading treatment or punishment, in accordance with domestic legislation and applicable international law.” The extrajudicial killings also potentially violate the ongoing Responsibility to Protect commitment  to protect populations from “genocide, war crimes, crimes against humanity and ethnic cleansing, and their incitement” made by United Nations member states.

In most cases, the next logical step for diplomatic strategy would be a call to action from the Association of Southeast Asian Nations (ASEAN) to place political pressure on Duterte to end the extrajudicial killings and disregard of habeas corpus. However, Duterte has accepted chairmanship for the ASEAN 2017 summit, making it unlikely that the region will unite to put an end to the internal violence against suspected drug users and dealers.

Meanwhile, Duterte has publicly mulled over withdrawing from the International Criminal Court (ICC), deeming it “useless.” This move would not be unprecedented: Russia recently  withdrew as a signatory following allegations of war crimes towards civilians in Syria, and several African nations have announced their intended withdrawal as well. However, Filipino withdrawal from the ICC would seriously hamper the United Nations from pursuing tribunals for wrongful deaths under Duterte.

U.S. diplomacy could play a crucial role in ending the killings and incarceration of thousands of Filipinos. Unfortunately, relations have been strained, at best. Although the Philippines, a former U.S. colony, has long boasted the strongest support for the U.S. of any country on Earth (In 2015,  92% of Filipinos had a favorable view compared to 83% of Americans), diplomatic relations began to sour after Duterte took office. Soon after Duterte was announced the presumptive president, U.S. President Barack Obama made a diplomatic phone call to the new world leader, commending the Philippines for its “vibrant democracy,” while also highlighting “enduring values” that underpinned their “longstanding ties,” including “shared commitments to democracy, human rights and rule of law.” Duterte responded to what he saw as criticism of his victory and impending War on Crime by publicly calling US President Barack Obama a “son of a whore,” resulting in a canceled meeting between the two leaders during the 2016 ASEAN summit.

Even within that context, there is still hope in Southeast Asia for drug policy reform to model pragmatic alternatives to Duterte’s drug war. Myanmar, a Golden Triangle (one of Asia’s two top opium-producing areas) country, is currently receiving United Nations support to reform policies. The joint recommendations supported by the United Nations Office on Drugs and Crime and the Chief of the Myanmar Police Force include: 1) the removal of compulsory registration for people who use drugs; 2) a recommendation to transfer programs for people who use drugs from prison to drug treatment centers; 3) a reduction of penalties for small offenders; and 4) the inclusion of a harm reduction approach in programming. This beacon of hope in the region will do little to immediately end the violent drug war in the Philippines, but it could create momentum for reform in other Southeast Asian countries.

Though many in the international community have been horrified by Duterte’s methods, he boasts a high approval rating among his own people (though some argue that, within a historical context, his approval rating is not particularly notable).  A September Social Weather Stations (SWS) survey of 1,200 respondents found a 75% satisfaction rating overall, with Duterte’s drug policies in particular receiving an “excellent” rating and a high +78 net score. The Duterte administration also scored well on “promoting human rights” and “helping the poor,” both with a net score of +63.

Duterte’s supporters argue that you “cannot guarantee development if your peace and order, security and safety, is not guaranteed for all citizens,” though they twist this statement to justify the growing list of people killed in Duterte’s efforts to crack down on crime. Many Filipinos believe that years of corruption and incompetence under former President Aquino cultivated a widespread illicit drug market that Duterte must now rein in. In that context, Duterte’s continually updated public lists of “drug personalities” and “narco-politicians,” which implicate a range of politicians — from low-level street cops to high ranking congress members — have been lauded as  a never-before-seen move to hold government accountable for its role in corruption.

This mass support for the new president has created a nationalistic fervor in which Filipino politics, news, and social media target those who are critical of Duterte’s tactics. Senator Leila De Lima, one of the most vocal figures in Filipino government to speak out against Duterte’s drug war, has been the target of cyber-bullying, slander and defamation, as well as allegations of corruption and involvement in the drug trade herself. Investigative journalists, human rights activists, and even UN delegates have been shamed, threatened, and cursed by Duterte for questioning the validity of his methods. Duterte has even threatened to add protesters to his kill lists on grounds of worsening the Philippines’ problems with drugs.

Of course, not all Filipinos are in support of Duterte’s methods, chief among them the families of the dead, many of  whom may never know the true stories of how their loved ones died. Marcelina Mallari’s son, Robert, was 51 years old when he was killed by police. Police say Robert was attempting to purchase methamphetamine from a local dealer when police shot both men. However, bystanders say that Mallari, who supported himself by by recycling cans and bottles and slept nearby, witnessed police shooting the dealer and was killed when he got in the way.

“He will be a witness, because he saw…That’s why he was killed also. And it’s useless to protest to police, because they invent stories. So we did not try to complain.”

DRUG WAR NEWS FROM AROUND THE WORLD

The War on Drugs is an international travesty. This new section of the Monthly Mosaic, co-sponsored with SSDP’s International Outreach Committee, will highlight some of the top drug policy reform news from around the world…

Cambodia: Prospect for a budding industry “While on paper, Cambodian law still classifies marijuana cultivation as illegal, the government has historically allowed small-scale farmers to grow the plant for personal consumption.”

China: Trump push to combat drug trade may mean starting with China, not Mexico “As the methamphetamine industry evolved over the last decade or so from small, homegrown operations in the U.S. to the super-labs run by Mexican cartels, cooks and producers of the drug have begun to rely more and more on China for their ingredients. Mexico now supplies 90 percent of the methamphetamine found in the U.S., and 80 percent of precursor chemicals used in Mexican meth come from China, according to a study by the U.S.-China Economic and Security Review Commission.”

Costa Rica: Cream Cocaine Latest Innovation by Drug Traffickers In Latin America “This unusual bust is reflective of an age-old criminal dynamic: As authorities better their drug interdiction capabilities, smuggling groups search for the most cutting-edge techniques to avoid detection of their products.”

Ecuador: Ecuador Makes Biggest Cocaine Bust of 2016 as Drug Seizures Rise “While Ecuador itself does not produce any significant amount of cocaine, it is sandwiched between the world’s two main producers of the drug — Colombia and Peru — and receives shipments from both ends.”

Ireland: Irish Government passes medicinal cannabis bill without vote “The Irish Government had said it would not oppose the legislation. It aims to legalise and regulate cannabis products used for medical purposes.”

Indonesia: Indonesia to execute more drug inmates in ‘near future’ “Indonesia’s attorney-general announced…that more inmates convicted of drug smuggling will be executed in ‘the near future’ under the country’s campaign against the narcotics trade. ‘We still prioritize the execution of drug inmates,’ Muhammad Prasetyo was quoted as saying.”

Mexico: ‘Impunity has consequences’: the women lost to Mexico’s drug war “Their fate remains unknown, but they are believed to have been forcibly ‘disappeared’ because they knew too much about corrupt relationships between Mexican politicians and cartel bosses.”

Thailand: Thailand’s Justice Minister Stands Firm on Removing Krathom and Marijuana from Narcotic Drug List “Thailand’s Justice Minister Gen.Paiboon Koomchaya has said he is standing firm in his aim to remove krathom and marijuana from the narcotic drugs list and treat them as medicinal herbs. He believes the move is necessary because the government has failed to curb them.”

United Kingdom: Nightclubs to offer free drug-testing booths to check purity of cocaine and MDMA “Users will not be required to give their names, and will not face repercussions for possessing an illegal substance. Police have agreed not to target anyone using the booths and are reported to be “most supportive” of the scheme by the organisation running it.”

Do an SSDP DARE and get points on the SSDP Chapter Activity Tracker!

The DARE committee strives to promote inclusivity within the SSDP network, and facilitate collaboration and engagement with presently underrepresented perspectives, individuals, and movements. In order to ensure that the Monthly Mosaic more intentionally and meaningfully reflects these values, the DARE committee is pleased to invite members of our student and alumni network to submit ideas for upcoming issues.

If you have any questions, please contact Frances at frances@ssdp.org. We look forward to reading your submissions!