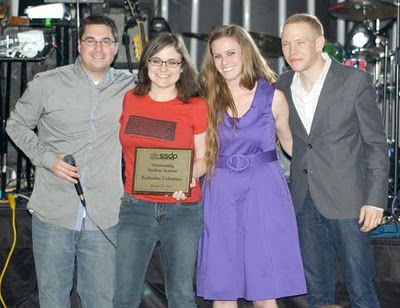 Earlier this month over 400 people gathered at our 2011 Training Conference and Lobby Day, and to wrap things up on the last day, SSDP recognized the achievements of several extraordinary student and non-student members during the Awards Ceremony and Benefit Concert. In the coming weeks, keep an eye out as we will write one blog post for each award recipient highlighting the hard work that made them stand out from the crowd. Two students each year receive the “Outstanding Student Activist” award. In our first award profile, it’s easy to see why Katharine Celentano (Columbia University) deserves this honor. In fact, I think “outstanding” might even be an understatement… Katharine Celentano made hundreds of calls to California voters last year urging them to support the passage of Proposition 19 to tax and regulate marijuana like alcohol. Katharine earned the title of “Professional Phonebanker” using the Just Say Now phonebanking tool, rising to and staying near the top of the leaderboard during the entire campaign. With 551 points earned, only two others made more calls than she did, all while tackling her first semester of rigorous coursework studying Neuroscience and Behavior at CU. Katharine has been advocating for a Good Samaritan policy on campus at Columbia, currently the only Ivy League school that does not protect students from punishment when calling 911 in alcohol and other drug related medical emergencies. Because of the work she and others have done, the school administration is now closer than ever to adopting this life-saving overdose prevention policy. She also initiated a coordinated media response to last year’s “Operation Ivy League” drug bust involving five Columbia students, shining light on campus drug law enforcement and calling for a change in policing practices. Last month, she helped draft and issue this press release in response to startling data indicating an increase in low-level marijuana arrests targeting youth and people of color in New York city. Katharine has been instrumental in building a coalition of on- and off-campus individuals and groups such as CHURON, the Columbia University Harm Reduction Outreach Network, and the Washington Heights CORNER Project, a local syringe exchange program, to coordinate harm reduction efforts with the SSDP chapter across all CU schools at the university as well as within the larger community. This is not the first time we’ve told you about her work, and it certainly won’t be the last. Back to top