This article originally published here: http://the-libertarian.co.uk/psilocybin-still-strictly-prohibited-despite-medical-potential/ Two very similar chemicals, psilocybin and psilocin, are the active psychedelic ingredients in many species of mushroom.* Upon seeing the common term “magic mushrooms,” or simply “shrooms,” readers may think of familiar references to the recreational use of the fungi, such as  the Jefferson Airplane song White Rabbit. The former Harvard psychology professor and LSD advocate Timothy Leary attributed his initial inspiration to psilocybin, and encouraged the use of such substances in an essentially uncontrolled manner. However, serious scientific study of psilocybin, abandoned for many years in the wake of the 1960s, has now begun again. Partly funded by the Multidisciplinary Association for Psychedelic Studies (MAPS), it suggests much more concrete benefits than some might think. Such mushrooms have been used for centuries, if not millennia, for traditional divination purposes by certain indigenous peoples of Mexico, including the Aztecs. However, the mushrooms were for many years essentially unknown to the rest of the world. It was not until 1955 that the first whites were permitted to consume the mushrooms. R. Gordon Wasson was a banker, then vice-president of J. P. Morgan Co. Along with his photographer Allan Richardson, he had managed to gain the trust of the natives and was admitted to a mushroom ceremony. His enthusiastic report of the experience did much to popularize the fungi in the US. The Swiss chemist Albert Hofmann was responsible for both the invention of LSD and the discovery of the active ingredients in the mushrooms, which he tested on himself. He points out in his book LSD: My Problem Child that psilocybin and LSD are quite similar, both in chemical structure and psychological effects. The most notable difference is that the effects of psilocybin generally last for 6 hours or less, while those of LSD continue for up to 12 hours. Psilocybin shows definite potential for some of the same medicinal uses as LSD. These uses include treating the excruciating condition known as cluster headaches and alleviating the anxiety of the terminally ill. Just as LSD has proven beneficial in some studies for treating alcoholism, so has psilocybin, and the latter has recently been used, to great effect, to assist cigarette smokers in quitting. One such study involved 15 people who had been smoking approximately a pack a day for around 30 years. With the assistance of 3 doses of psilocybin administered over 13 weeks, 11 of them were able to quit smoking completely. Of the remaining 4, 3 had not yet completed the followup process at the time of this assessment. All subjects quit on the date of the first dose, and several of them reported little to no experience of withdrawal symptoms. Approximately 83% of these explained that the drug had made them more oriented towards the future, so that they were more focused on the benefits of quitting and able to resist the immediate temptation to smoke. 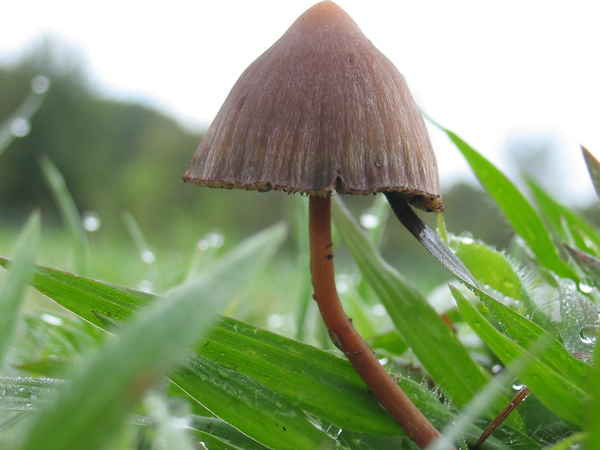 Psilocybin has also recently been studied as a treatment for obsessive-compulsive disorder, and is a subject of recent neuroscience research in connection with learning and memory. David Nutt, former head of the UK’s Advisory Council on the Misuse of Drugs, has recently been awarded a grant to study the drug as a treatment for severe treatment-resistant depression. However, his work has been delayed; he complains of the need for anyone who would produce the drug to jump through “regulatory hoops.” Such restrictions also apply to the US; they are mandated internationally by certain United Nations treaties such as the 1971 Convention on Psychotropic Substances. Nutt estimates that complying with the regulations takes as long as a year and triples the cost of acquiring the drug. Nutt points not only to the already mentioned red tape, but to a “culture of repression,” even a fear of arrest, surrounding such substances in science. All of this has hindered research in the area. Unfortunately, both psilocybin and psilocin have been strictly prohibited in the United States since October of 1968, and were placed in Schedule I of the Controlled Substances Act in 1970. This move was largely due to the same exaggerated negative publicity which attended LSD beginning in the mid-1960s. Sandoz Laboratories, which served as a source of both substances, ceased production of psilocybin in 1965, mentioning this decision in a letter mostly pertaining to LSD. In the US, courts in the state of New Mexico have actually ruled that growing such mushrooms does not constitute “manufacture of a controlled substance” and thus is not actually illegal in the state. The Supreme Court in the state of Florida has ruled that wild psilocybin mushrooms are not explicitly banned. However, on the federal level, not only does psilocybin remains a Schedule I substance, but the relevant species of mushroom are banned in connection with this. Psilocybin does not pose a risk of addiction, for the same reasons as LSD; a single dose produces a tolerance which makes further doses dramatically less effective. It is also remarkably non-toxic. One estimate puts the LD50 (that is, in an experiment, the dose that would be lethal for 50% of subjects) at 641 times the minimum dose necessary for psychedelic effects. All of the above evidence is in conflict with the placement of psilocybin in Schedule I, which requires that the drug have “a high potential for abuse,” “no currently accepted medical use in treatment in the United States,” and “a lack of accepted safety for use…under medical supervision.” It is sincerely to be hoped that restrictions on this substance are loosened in the many countries where they exist. Its current status is an absurd anachronism. *When consumed by humans, psilocybin is simply broken down into psilocin before reaching the brain. However, psilocybin is more stable than psilocin, so the relevant research has simply used psilocybin.