HomeBlog Re-evaluating the Metrics of Drug Policy at the UN

Re-evaluating the Metrics of Drug Policy at the UN

Re-evaluating the Metrics of Drug Policy at the UN

Written by Rebecca Dayan, chapter leader of Sarah Lawrence College SSDP. On January 21st, the International Centre for Science in Drug Policy (ICSDP) launched its open letter titled “A Call for A Reprioritization of Metrics to Evaluate Illicit Drug Policy” with a panel of four experts at the United Nations. The ICSDP, a group of scientists and academics, wrote this letter in anticipation of the United Nations General Assembly Special Session (UNGASS) on the World Drug Problem, which will take place in April of this year. The UN has not held a special session about drug use since 1998. At the last session, the General Assembly met with the goal of eradicating illicit drug use, but in 2016, drug policy advocates are hoping that the UN will take a more harm reduction friendly and less punitive approach.

A full house showed up at the United Nations for the event. Photo by Leland Radovanovic, CUNY Baruch SSDP.

The International Centre for Science in Drug Policy hopes to contribute to this change by shifting how the General Assembly measures illicit drugs. Currently, the UN and member states in general use metrics that assess the supply and demand of drugs, looking at specifics such as price, purity, and the number of arrests among other categories. The ICSDP argues that these metrics ignore the complex ways that drugs affect communities and have not led to effective changes in the global drug problem because they prioritize only a small number of outcomes. The panel featured presentations from speakers focused in the four areas that are outlined in the ICSDP’s open letter: Development, Peace/Security, Health, and Human Rights. Dr. Dan Werb, an H.I.V. epidemiologist and director of the ICSDP, demonstrated the need for better development indicators through a case study of Tijuana, Mexico. In 2009, the Mexican government decriminalized the possession of small amounts of drugs after a failed military intervention launched in 2006. Despite the new policy of decriminalization, drug arrests increased in Tijuana, a key transit point of drug trafficking between Latin America and the United States. Although the Mexican government intended to increase the availability of evidence based treatments, due to insufficient resources, only 8% of people who injected drugs had access to methadone treatments. Police frequently arrested and bribed drug users, and Dr. Werb attributed this phenomenon to the low wages that police earn. Werb raised the important point that without adequate resources for development, drug policy reforms have little chance of succeeding. Metrics that take indicators like national GDP and poverty in drug cultivation regions (among others) into account will lead to more successful drug policy outcomes. Dr. Kanna Hayashi, a research scientist, presented on the topic of peace and security. Based on a case study of Thailand, her findings reflected some of the patterns from Dr. Dan Werb’s study of insufficient access to evidence-based treatment and police intimidation. Although people with drug dependence had access to Opioid Agonist Maintenance Therapy due to its inclusion in Thailand’s universal health care, people in treatment reported taking significantly lower doses than the recommended doses. 60% of people who received treatment were in Compulsory Detention Centers and reported human rights violations. Treatments received in detention centers, furthermore, led primarily to temporary but not long-term cessation. 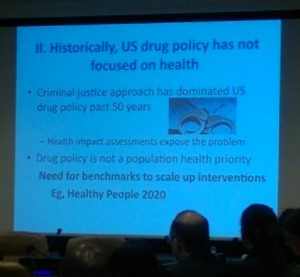 Dr. Dahlia Heller, a professor at CUNY’s school of public health, focused her presentation on the United States and health. She spoke about the importance of public health surveillance in collecting metrics on drug policy and health and the need for the United States to focus more on morbidity and fatalities involved in drug use, rather than simply exposure. She stressed that statistics measuring incidences of drug related illnesses and deaths exist, but the government does not compile this data in a unified way. Dr. Heller emphasized the need for benchmarks that could be used to scale up government interventions and metrics that address variable health risks related to different drugs or modality of use. The final speaker, Genevieve Sanders from Harm Reduction International, spoke about how human rights indicators are crucial to improving drug policy on the global scale. Human rights abuses are prevalent in the name of current drug policies due to the punitive nature of these policies. The UN has paid no attention to human rights violations in previous conventions about drug abuse,  and there are currently no benchmarks or indicators related to human rights. Sanders outlined how the UN could develop these benchmarks: first by thinking of human rights that drug policy might engage such as the right to health or freedom from torture, then developing indicators for impact and the process of implementation of policies that honor these human rights. She highlighted three important points: the need for disaggregated data that identifies inequalities with various groups and demographics, the need for a transparent and participatory for developing indicators, and the fact that developing proper indicators is a matter of international law. Careful consideration of metrics is crucial for all individuals who play a role in shaping drug policy, from the governmental level and from the standpoint of student activists. As students from all over the world form chapters of SSDP, it is important to consider the implications of improving drug policy on an international level: for instance, as the case study of Mexico shows, countries must have adequate resources in order to actualize the policies that organizations like Students for Sensible Drug Policy strive for. The ICSDP open letter provides an opportunity for everyone, from United Nations officials to grassroots activists to reconsider how governing bodies can better evaluate and implement drug policies.