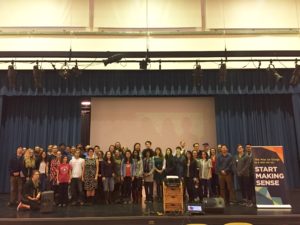 Written by Guest Blogger Lauren Mendelsohn On October 15, 2016, students, alumni, and members of the community from across the Pacific Region gathered in Santa Cruz, California for SSDP’s third regional conference of the year. Over 50 people attended the successful event on Saturday, October 15 at UC Santa Cruz for a day of educational programming on psychedelics, cannabis reform and industry issues, the intersection of public health and criminal justice, professional development, and more. Despite the rain, plenty of students showed up early to grab coffee and breakfast before the conference began. After people settled in, Dr. Rupa Marya, a hospitalist at the University of California, San Francisco,  gave a presentation for the first session of the day. Dr. Marya’s discussion focused on how police violence, which disproportionately affects people of color, is a public health issue, and urged  the medical community to speak out and proclaim it as such. It was inspiring to see a doctor get so impassioned about social and political issues, and to know that many healthcare professionals feel this way. 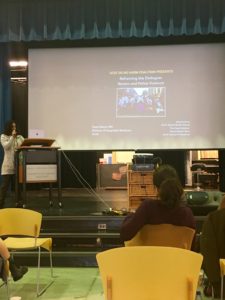 Dr. Mayra’s presentation was followed by two concurrent panels. One was called “How Green is the Green Rush?” and was moderated by Mitchell Colbert. This panel featured an all-star cast of five speakers: Valerie Corral of Wo/Men’s Alliance for Medical Marijuana, Jeffrey Gray of SC Laboratories, Pat Malo of Cannabis Advocates Alliance, Chris Van Hook, creator of the Clean Green Certification program, and Chris Conrad, an internationally recognized expert on industrial hemp and cannabis,. The other panel was called “Party Safe: Harm Reduction in Nightlife and Festival Settings” and was moderated by SSDP’s own Frances Fu. The workshop featured Irina Alexander and Rhana Hashemi, who discussed harm reduction in its many forms, including psychedelic trip sitting, drug education reform, and naloxone administration.   After lunch, students gathered back at the Event Center for two more concurrent panels. “Beyond Legalization: Building an Inclusive Drug Policy Reform Movement” featured cannabis attorney James Anthony, community organizer and CannaBizWatch founder Lanese Martin, MAPS Policy and Advocacy Manager Natalie Ginsberg, Willamette College of Law SSDP chapter president Edgar Diaz, and was moderated by SSDP Board of Directors Chair Lauren Mendelsohn. At the same time, SSDP California Campus Coordinator Oliver Zerrudo was leading a workshop called “Starting From the Bottom Now We’re Here: Taking Your Chapter from 0 to 100” that gave tips on recruitment, event planning, and more. Following this, students split up yet again for the final concurrent panel of the day. SSDP alumni Jesse Stout moderated a lively discussion on California’s adult use initiative called “Prop. 64: The Changing Legal Landscape of Cannabis” which featured cannabis activists Chris Conrad and Mikki Norris as well as attorney Lauren Vazquez. As this was going on, SSDP Board of Directors Vice Chair Eric Gudz moderated a discussion on “Professional Development” with David Hua of Meadow, Louis Han of Arcview Group, and SSDP Deputy Director Stacia Cosner, who talked about issues ranging from mentoring to interviewing to how to leverage SSDP on your resume. The attendees reunited in Stevenson Event Center for “Psychedelics and Entheogens: Cognitive Tools for Healing and Learning,” a set of three lectures on different aspects of psychedelic use, culture, and research. The first talk was given by Larry Norris of Entheogenic Research Integration and Education (ERIE) on how psychedelic insights can move beyond productivity and stimulate social justice movements beyond drug policy. The second talk was given by Natalie Ginsberg of the Multidisciplinary Association for Psychedelic Studies, who focused on psychedelics as a tool for “healing justice,” speculating that if psychedelics can be used to heal people, then perhaps in the future, people will make policies that are more humane and holistic as well. The final talk was given by Dr. James Fadiman, author of The Psychedelic Explorer’s Guide He spoke about the research behind microdosing psychedelics and the medical and cultural implications of this growing global phenomenon  The lessons were fascinating, and evidenced that the potential of psychedelics for both healing and self-exploration is tremendous. Law Enforcement Against Prohibition speaker Carl Tenn 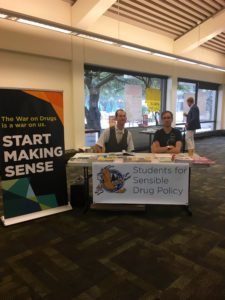 enbaum closed out the day with a moving presentation called “The Failure of Marijuana Prohibition: A Cop’s Perspective.” He talked about LEAP’s mission and the importance of treating drug users and dealers from a public health perspective, rather than with a punitive attitude. He emphasized the need for legal regulated markets to ensure that people have safe access to cannabis. This presentation was a great way to close out the day, and attendees left feeling fired up and ready to change drug laws.  This conference would not have been possible without the hard work of the University of California Santa Cruz chapter and SSDP California staff members.