Written By: Samantha Goldman In April of 2011, I would have never dreamed that I would coordinate a week of events the following April to educate my peers at Ithaca College in Ithaca, New York about the wrongful prohibition of industrial hemp growth in America under marijuana laws and the plant’s potential economic, health, and environmental benefits. It was my first time leading an SSDP meeting, and I was nervous. I didn’t realize it then, but I know now that I was not afraid of what my peers attending my initial educational event on hemp thought of me. Instead, I was unsettled that I had found my life’s work at twenty years old and I was presenting it with only a basic understanding of what I wanted to fully grasp. It was incredibly motivating to see how engaged my audience was and I soon lost any doubts I had about being able to gain support for cannabis law reform. I was on the path with no intention of straying from it. Over the course of the 2011-2012 year, I worked with officers and students who participated in SSDP and Ithaca College Environmental Society(ICES), as well as some in the Aloha Movement Project (AMP), to pull together three events to hold in conjunction with the college’s celebration of Earth Week, hosted by ICES. I was also out there promoting my project to everyone I knew; embracing social media through my tech-savvy volunteers; chatting with locals and shop owners selling hemp products; postering campus corkboards, downtown Ithaca, and neighboring Cornell University; editing a commentary our SSDP president wrote for the city newspaper about Cornell’s viability as a hemp research facility; writing for the school newspaper about cannabis prohibition; and writing for a bi-annual student publication about the systemic problems entrenching hemp in America’s legal clutches. By the time our week had come, my team and I had done everything we could to constantly insert hemp into the collective consciousness. For our first event, ICES provided hemp twine and beads for passersby to sit down and make their own hemp jewelry on the main academic quad. Our intention was to break the stigma about industrial hemp that it is psychoactive like its relative marijuana. We handed out pamphlets and samples of hemp products sent in from our sponsors at Hemp History Week and chatted with close to a hundred people over the course of the three hours, all the while being entertained by a student band. By the end of the day, out of samples, I felt I had personally changed dozens of people’s misconceptions about hemp and marijuana. It was so rewarding to know how open people were to talking about the drug war, and to broaden their understanding of its effects on our daily lives. I could see a similar rise in confidence in my peers as they continued their outreach. The students from ICES were able to learn more about the drug policy aspect and began to explore it with the students they approached. We made a solid ally with ICES and other like-minded organizations that day that were comprised of people who just hadn’t realized the extent to which our goals were related. 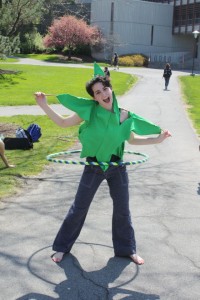 Our second event brought awareness to Native American struggles related to hemp. I approached IC Associate Professor and Chair of the Anthropology Department, Brooke Hansen, to ask if she would be interested in helping me coordinate the event. I had completed a research project for her class about how the Oglala Lakota of the Pine Ridge Reservation in Manderson, South Dakota were fighting for the right to grow hemp on their land to heal their people. They felt that the US Drug Enforcement Administration was wrongfully prohibiting them from cultivating hemp, denying them their right to tribal sovereignty. We screened a documentary called Standing Silent Nation, which was produced to bring awareness to this ongoing battle with the DEA, complete with interviews from Alex White Plume, the leader of this movement. I Skyped with Alex before the event and he was thrilled and very thankful for our support, as were the filmmakers. One student used the film as reference for a research paper, while a resident of the nearby EcoVillage community reported what she learned back to her neighbors. On the third and final night of Hempstravaganza, we began with a preview screening of the in-progress documentary Bringing It Home, a film about global hemp industries, healthy building, and creating a greener America. After the screening, we called David Bronner, president of Dr. Bronner’s Magic Soaps, over Skype to present a PowerPoint on the world history of hemp all the way up to today’s activism in the US to re-establish the industry on home soil. Following the presentation, Dr. Anil Netravali, a professor of fiber science at Cornell University, presented his research in biocomposites and his trials with hemp fiber. I couldn’t have been more proud of myself and my team as people left with samples and pamphlets to share their new knowledge with the world. Their lessons were not limited to their field of study; we had truly breached most students groups on campus, the college faculty, and even Ithaca’s mayor. 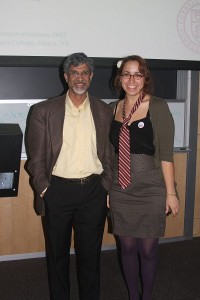 Samantha and Dr. Netravali, the professor of fiber science at Cornell, following his presentation on hemp biocomposites.

It’s been eight months now since Hempstravaganza ended. In July, I began working for Bringing It Home producer Linda Booker on grant proposal writing initiatives and will be working on the audience engagement campaign in the coming months. I will be setting up a screening of Bringing It Home at Ithaca College with the current SSDP board members for the second annual Hempstravaganza, as well as at other universities across the US and possibly in Australia, where I’m currently residing. I have never felt more empowered in my life, thanks to the skills I gained and the education I received through my participation in SSDP during college. I found my voice, my talents, and my career path through SSDP and now I’m working on a handful of other hemp initiatives. I would strongly encourage other SSDP chapters to take leadership on this initiative and empower themselves and their communities with a deeper knowledge about cannabis prohibition. I would also recommend reaching out to other student groups in order to build solidarity on campus and help peers realize just how much the War on Drugs impacts their lives in ways they may have never imagined. Let’s help others imagine a healthier, more sustainable world through sensible drug policy changes regarding hemp prohibition, and let’s make those changes. For information about screening Bringing It Home at your college, contact Samantha Goldman at samanthaggoldman@gmail.com.