HomeBlog Revitalizing SSDP at U.C. Hastings College of the Law

Revitalizing SSDP at U.C. Hastings College of the Law

Revitalizing SSDP at U.C. Hastings College of the Law 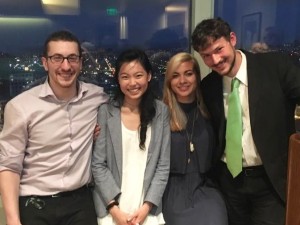 Students for Sensible Drug Policy (SSDP) was dormant at U.C. Hastings (UCH) for the last few years. It was an unfortunate result for a club that was positioned to educate future attorneys regarding drug policy and its effects. UCH sits in the legal cradle of the Bay Area – U.N. Civic Center, San Francisco. The school is blocks away from City Hall, Superior Court, District Court, U.S. Court of Appeals, and the State Supreme Court. Many UCH students go on to extern for the judges of these very courts and these students are well positioned to promulgate policy in the future. There are many student-run organizations at U.C. Hastings. Many fit the mold of a traditional club for a traditional field. While going down the list of clubs that marketed themselves on Facebook – I came across a lonely post (no likes, no comments) by Natalie Koski-Karrel that sought students interested in drug policy, specifically cannabis. There it was – a club that appealed to my interests from a student that wanted to revitalize SSDP at U.C. Hastings. I no longer had to “stay closeted” regarding my interest of cannabis. Natalie gave me an opportunity and a platform to become an advocate for sensible drug policy and cannabis at U.C. Hastings. Immediately, Natalie was able to put me in touch with SSDP and U.C. Hastings alum Jesse Stout. They both opened my eyes to the robust world of advocates for sensible drug policy. I had no idea there was such an active presence in my own backyard and that there was an avenue to pursue cannabis work as an attorney. I was hooked on SSDP after talking with Natalie and Jesse – for that I am grateful. After my initial “orientation” to the field, Natalie and I got to work on putting together a panel that would revitalize SSDP at UCH. It started with including Jesse as our moderator and from there we began to cultivate leads given by friends and family. My Dad mentioned a doctor that he used to work with at the Haight-Ashbury free clinic in the 80’s – Dr. John Mendelson. Dr. Mendelson’s enthusiasm for the panel jumped off the email I was reading. I had landed my first panelist and started to look for more. Days later, my older brother (Loren Schwartz) and I went out for drinks with Taylor Margot, an associate with Wilson Sonsini. I expressed my interest to Taylor regarding cannabis law and policy. Taylor’s eyes widened as he knew the perfect person to connect me with. Taylor put me in touch with Spencer Williams, an MIT undergraduate and Stanford Law Graduate who was the newly minted General Counsel of Confident Cannabis. Spencer was nice enough to spend an hour with me on the phone talking about the industry. At the end of our phone conversation, I proposed the idea of including him on our panel. Spencer agreed. I wanted to add a dissenting perspective to our group of panelists. After asking around, my mom put me in touch with Judge Livermore of the San Mateo Drug Court. Judge Livermore is the longest continuously serving Drug Court Judge in California history. He was excited about the topic and agreed to join the panel. I had thought we assembled a great panel until Natalie kindly reminded me that all the panelists were white men and that we should include a bit more diversity. Natalie was able to get in touch with Tsion “Sunshine” Lencho, a Stanford law graduate. After her brief stint in Big Law, Sunshine started her own firm specializing in the medical cannabis industry. Further, Natalie was able to get a hold of Amanda Reiman through Twitter. Amanda is the Manager of Marijuana Law and Policy at the Drug Policy Alliance as well as a faculty member at UC Berkeley. They both agreed to participate and our panel was set. As we started marketing the event, a certain buzz permeated the U.C. Hastings hallways. Students, family, and friends were interested in the subject and it became clear that there was a need for a platform where cannabis could be discussed. As the event was gaining visibility, snide remarks were made about the event like, “Will there be free weed?” or “What kind of munchies will be there?” As off-putting as those comments were, it demonstrated a need to move away from those stereotypes. The event went off without a hitch. We had approximately sixty guests at the height of the event – which was a great turnout for a reviving club. Professionals from around the Bay Area came to attend the event. We had attorneys, physicians, and researchers among others. As I sought advice about how to improve the panel, we were inundated with positive feedback thanking us for putting on this event. As great as the panel discussion and Q & A session was, I believe one of the real benefits was the socializing at the end of the night. Once the socializing started, I was mobbed with students interested in participating in SSDP for next semester and was given multiple leads on potential future panelists. The event gave law students a platform to network directly in the cannabis industry. SSDP is uniquely positioned to give students access to an industry that is flying under the radar and the UCH chapter is hungry for more.