Written by Rowan SSDP chapter members Lisa Tischio and Rachel Tevlin On Wednesday October 8th, students at Rowan University hosted the 4th annual Box City in protest of the university’s dorm eviction policy. Rowan University has a zero tolerance drug policy that causes dozens of students each semester to be kicked out of their on-campus housing for first time drug offenses. Box City is an all-night event in which students sleep on the Student Center Patio in cardboard boxes to represent and show solidarity to the students affected by this policy who were left without housing. Throughout the night, students show their support in opposition to the policy by signing a petition stating that students should not be evicted for non-violent drug offenses. This year, within just a few hours over 600 students signed the petition. Each year the petitions have been brought to administration, yet there has been no change in the policy. When a student is caught on-campus with an illegal substance, the university reserves the right to remove them from their housing at the time of the incident. Regardless of whether it is in the middle of the night or during a snowstorm, the student must pack their belongings and leave their residence. Rowan does nothing to support these students who often are afraid to contact their parents, may not have a vehicle on campus, and usually live far from the school. Unless they have a friend who lives off-campus, they often have no where to go and are left on the streets of Glassboro. This is obviously not a safe situation, and putting students who could be suffering from substance abuse issues on the streets does not solve the drug problem on campus. 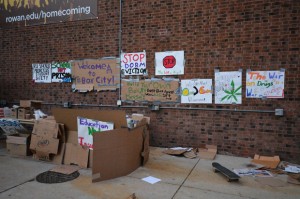 This is the 4th year Rowan SSDP has done their Box City protest.

Last year, Rowan’s SGA voted in favor of a resolution calling on the university to prioritize treatment and education over punishment when handling drug offenses to ensure that our students are protected and their education is not jeopardized. However once again, administration has ignored the voice of students. This year, the Rowan SSDP chapter is running a campaign around ending dorm eviction and hopes to gain the SGA support for this as well. In the meantime, the club is working to counteract this detrimental policy by implementing a program to help support students who were evicted from on-campus housing. Through this program, evicted students would be provided a place to stay off-campus while they are awaiting their disciplinary hearing. Rowan’s zero tolerance policy does nothing to stop drug use, and ultimately works against the students by enforcing harsh punishments that hinder students’ ability to continue their education. The university should focus on supporting and helping students who are battling with substance abuse. Removing a student from their housing only serves to make the problem worse. Despite the university’s attempts to stop drug use with strict penalties for violating the policy, Rowan University is not (and will never be) a completely drug-free campus. If the university aims to foster student development and reduce possible harm, there needs to be an emphasis on drug education and resources for students who are seeking help. Removing a student from their housing is not a solution to a campus-wide problem of substance use. Through events such as Box City, the Rowan chapter of SSDP continues to motivate the student body to advocate for a drug policy that takes into account the reality of drug use, and doesn’t put students out on the streets.