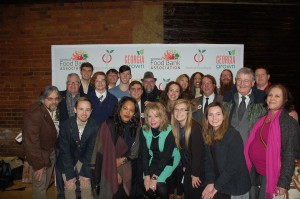 Written by SSDP Board Member, Jeremy Sharp The “Wild Hog Supper” is a tradition in Georgia Politics. The event is held annually and is hosted by the Georgia Food Bank Association. The premise of the event is to serve as a means for legislators, lobbyist, and engaged citizens to mingle and talk about the upcoming legislative session. In partnership with local advocacy group Athens C.A.R.E, several members from SSDP’s Georgia chapters were able to attend and rub elbows with elected officials. Georgia’s Legislators have introduced 6 different bills involving Cannabis reform this year. So, Georgia’s SSDP chapters came to the event organized, dressed to impress, and well versed on contemporary issues involving Cannabis reform in Georgia. We wanted our officials to know that we were closely following how our legislators were handling the Cannabis issue. Sometimes it takes students to speak sensibly in order to get things done. There are two hotly contested bills in the GA Assembly for which SSDP chapters are advocating. The first and most prominent bill is House Bill 722, which was introduced by State Rep. Allen Peake (R) of Macon, Georgia. Surprisingly, Peake had 100 co-sponsors when the bill was introduced. HB 722 seeks to remedy the supply issues and establish in-state grow regulations for patients seeking medical cannabis. Currently, Georgia has an extremely limited Medical Cannabis program that allows for registered patients to possess small amounts of high CBD low THC oil. Patients who meet the criteria of the 8 established medical conditions that the law allows to receive the oil are referred to the GA Medical Cannabis Commission. The Commission meets once a month and is made up of politicians and law enforcement agents who are handpicked and appointed by the Governor. The commission then decides whether the patient can possess the cannabis oil. The law only allows for the decriminalization of small amounts of the oil (20oz), and patients must break federal law by going to a state that has a functioning Medical Cannabis program to procure their medicine. Once a medical patient in Georgia and their family have circumnavigated a different state’s Cannabis regulatory system to procure their medicine, they must then drive, fly, or ship the medicine across state lines (a violation of federal law). Once this is done the patient and their caregiver are immune from prosecution for possessing small amounts of the low-THC oil. The current law turns our patients into drug traffickers by crossing state lines with a substance that is currently classified as Schedule 1 narcotic at the federal level. It is easy to see what a quagmire this has created. Representative Peake’s Bill seeks to remedy the problem of turning patients into federal criminals by allowing a few companies to produce and provide the low-THC oil within Georgia. A recent poll by Peake’s team showed 84% percent of Georgia’s registered voters  support in-state grow and expansion of the current Cannabis regulatory system. Our Villainous Governor and his special interest groups consisting of big pharma, the addiction industry, various police and prosecutorial unions have vowed their opposition to any further encroachment on their monopolies over cannabis regulation. This means Peake must navigate his bill through some murky political waters. If HB 722 passes both houses (both dominated by Republicans) and is vetoed by Governor Deal, then HB 722 goes back to the House and must Pass by a 2/3rd  majority. This may prove to be difficult because Deals’s Governorship has been criticized as authoritarian by cynics. He exerts a considerable influence over the daily activities of the legislator. Anyone who goes against his will risks political retaliation. As grassroots organizers, our goal is to put pressure on Assembly Members to promote sensible polices. Assembly Members may fear Governor Deal’s wrath, but without the support of the people they have no jobs. This is why it is important for Georgia’s college students to get involved. Students are put into an ivory tower and are allocated opportunities, liberties, and political power that are unparalleled by any other demographic. Athens C.A.R.E and Georgia’s SSDP Chapters have taken it upon themselves to lead this fight. Just a few weeks ago we were making huge waves by lobbying our legislators at the Wild Hog Supper. Students were engaging our officials by talking about the problems with our current laws surrounding cannabis. We eloquently pointed out the flaws in current regulatory structure while offering constructive advice on how to help better solve this issue. We able to meet legislators from across both isles and both houses, and we received receptive responses while doing so. The overall all impression left on us was a feeling of optimism for the future of Cannabis reform in Georgia. The Wild Hog Supper was the first of many activities we are planning to help move along cannabis reform in Georgia.