HomeBlog SSDP at the 59th Commission on Narcotic Drugs

SSDP at the 59th Commission on Narcotic Drugs

SSDP at the 59th Commission on Narcotic Drugs

The 59th Session of the Commission on Narcotic Drugs (CND) is scheduled for March 14 – March 22 in Vienna, Austria. Over the next several days, member states will start their final preparations for the upcoming United Nations General Assembly Special Session (UNGASS) on the World Drug Problem. SSDP is here with our allies in CSSDP, SSDP UK, YODA, and YouthRise to ensure the youth voice does not go unheard this week amidst the high-level debates. We will also be hosting a side event entitled “Are Drugs Policies Protecting Youth?” on Thursday, March 17, 1:10 pm in MOE100, where we will present our youth position paper. Check back often this week for daily updates on CND and UNGASS, follow the conversation on Twitter by using #CND2016, and check out IDPC’s CND Blog for detailed updates on sessions and side events throughout the week. 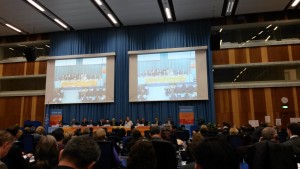 The opening session at CND on the preparations for April’s UNGASS.

The tension during day one of the 59th Session of the Commission on Narcotic Drugs indicated that there is still a lot of work to be done in order to build consensus among member states. While there is a hint of excitement about the upcoming UNGASS in April, the draft outcome document reflects reluctance to change the status quo and fails to address the numerous voices, including civil society, that are calling for an alternative approach to drugs. The current draft of the document contains no mention of the words “harm reduction” and neglects to mention the death penalty. The lack of any signs of progress or change on the document is very concerning to civil society members, especially after the very progressive dialogue at the Informal Stakeholders Consultation. Among the most highly debated topics was the abolishment of the death penalty for nonviolent drug offenses. Two key delegations made statements in support of this position: The European Union stated that they opposed all forms of the death penalty, while the Czech Republic called for a specific condemnation of this practice in the UNGASS outcome document, a statement which received a round of applause. Iran, who at last year’s rate will have executed 16 people over the 8 days of CND, made no mention of the death penalty and merely reiterated their commitment to upholding the framework of the conventions. No one applauded for them. Harm reduction was also a big topic, though not necessarily one that was explicitly mentioned. Several member states seemed to go out of their way to avoid using the term while also expressing a desire to see more policies grounded in a public health approach. During the Civil Society Task Force briefing, United States Director of National Drug Policy Michael Botticelli stated that “we must start embracing what science tells us works” and called for explorative new policies around drug use. However, he failed to mention Harm Reduction by name, unlike Iran which recognized that harm reduction and public health policies minimizing the harms of drugs are an inseparable part of their policy approach. The Czech Republic similarly discussed its success with harm reduction policies, which have been easy to implement and has “saved lives.” Two nation states really stood out throughout the day: Colombia and the Czech Republic. Colombia, which has been among the most outspoken member states regarding the failures of the drug conventions, referenced Albert Einstein when calling the continued reliance on the drug convention framework “insanity.” They made explicit demands for an expert advisory group to be formed that would explore evidence-based alternatives, such as harm reduction, to the current model of drug control. The Czech Republic made a fiery statement during the opening segment where they declared the War on Drugs a failure and expressed their disappointment with the current outcome document draft, declaring that “no outcome document is better than a weak outcome document.” 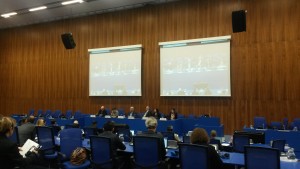 The final session we attended today was a briefing by the Civil Society Task Force where they provided summary reports of the regional consultations conducted by each member. Of particular interest to our delegation was the report on Affected Populations: Youth. Compiled via input from an online survey and in-person consultations, the report contained some positive language regarding the need for alternative approaches other than criminalization, but otherwise did not differ too much from other statements made throughout the day and was overall weaker than what we were expecting. Because the session went over on time, we were not able to make an intervention. Overall, the first day of CND was a little disappointing due to the constant reiteration of the status quo and the weak commitments by most countries to an inclusive dialogue. However, it’s clear that civil society members at UNGASS are not going to sit around this week and let the powers that be dictate the entire outcome document before UNGASS even begins. We’ll be working with our allies all week to ensure that the youth voice is heard here in Vienna and are optimistic that there will be more chances to directly speak out as the week goes on.