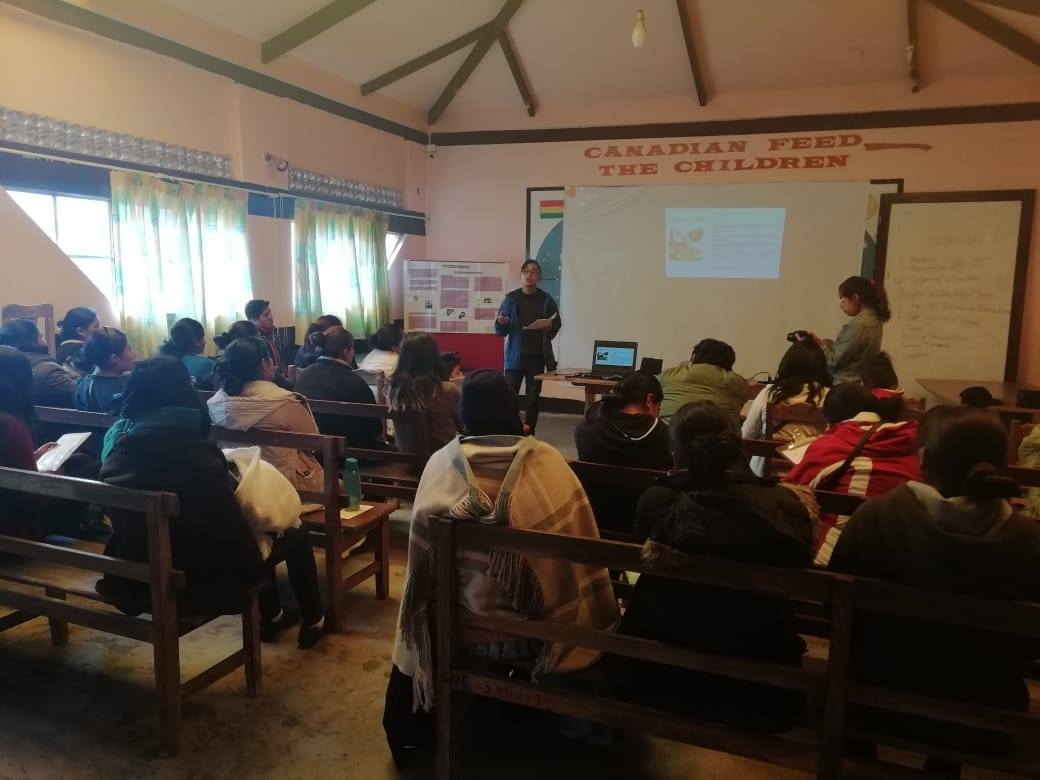 Over the last month, Abril Galván Ferrera and Jorge Antonio Aragón of EPSD(SSDP) Mexico have been working at the Kuymi Center in La Paz, Bolivia. A project conceived by the EPSD Bolivia chapter, Acción Semilla, and AIESEC, the Kuymi Center utilizes art and evidence-based education to educate Bolivian citizens and students about the harms of the War on Drugs and inspire them to get involved in policy change. Abril and Jorge reflect on their impressions of Bolivia and their work so far.

Ever since I first got involved with SSDP Mexico I dreamt of going abroad to explore new countries to learn about their culture and drug policies. Since arriving in La Paz I have noticed a great political and activism movement throughout the city. It’s electric and very exciting to be here.  It has also been rewarding to know that the chapters in Mexico are looked upon as an example of good leadership. I am hoping to make my country and SSDP proud with the work we’re doing in Bolivia.

Bolivia is a beautifully diverse and culturally rich country. The ancestral use of the coca plant, San Pedro cactus, and Ayahuasca is very different from the way psychoactive substances are used anywhere else.  However, there is still a lot of stigma and social injustice when it comes to other drugs and substances, including cannabis. Currently, there are extremely harsh laws that can jeopardize and even destroy people’s lives because of non- violent drug offenses. These laws have affected hundreds of people, many of whom are in maximum security prisons for simple possession of a controlled substance.  This is truly devastating and is an issue which needs to be addressed as soon as possible.

We are working on creating audiovisual materials, such as videos and music, to get the community involved and we have already received a lot of positive feedback in SSDP Bolivia. Hopefully, we can help the La Paz chapter become an example for others.  In the two weeks I have been here I gave a short talk on medical cannabis which had great attendance and response. We are also writing and creating content that can be shared for future events, focusing on harm reduction and education. I hope through our work and cultural exchange both countries can learn from each other, making SSDP grow and help change Bolivian attitude towards drugs in general. I feel truly honored to be a part of an organization that can help change the world.

I was already familiar with Bolivia from another context and as a visitor for a few short weeks. But this experience has helped me more closely understand some experiences and dynamics of daily life. Collaborating on the subject of drugs has shown me a cultural and socially different scenario from the one I know. It is not a lie that prohibitionist drug policies are the most propagated and adopted ideas around the world. Nor that this policy has produced more consequences than benefits, despite cultural differences in the perception of drugs. Knowing other contexts opens up a wider view for understanding how to influence and contribute to the task of destigmatization. I believe besides contributing and generating tools to build more sensible public policies, it is also important to work on generating a new common sense which suppresses the idea of prohibition and stigmatization of drugs and people who use them.

The problem goes beyond a legal-institutional framework. It is clear that we must work to guarantee rights and opportunities to all people, but also work to change the prohibitionist paradigm that has been internalized in society. This experience has helped me to meet people who have a common cause in favor of human rights. Knowing other realities is also an awareness exercise and it is possible to realize the costs that the prohibitionist drug policy has left behind. It is not about convincing people themselves, it is about making them reflect and think sensibly so people realize the costs of a way of thinking based on moral and reductionist issues. Being a part of the work with Fundación Acción Semilla was an exercise to acquire tools that help contribute to a paradigm shift. There is no doubt the network of work in this area is very large and it is of great importance to join and collaborate with each other to propose actions in favor of human rights. Desestigmatizing is also breaking with racist, classist and xenophobic ideologies that only contribute to magnify the social inequality gap.