HomeBlog SSDP on the Caravan for Peace

SSDP on the Caravan for Peace

SSDP on the Caravan for Peace 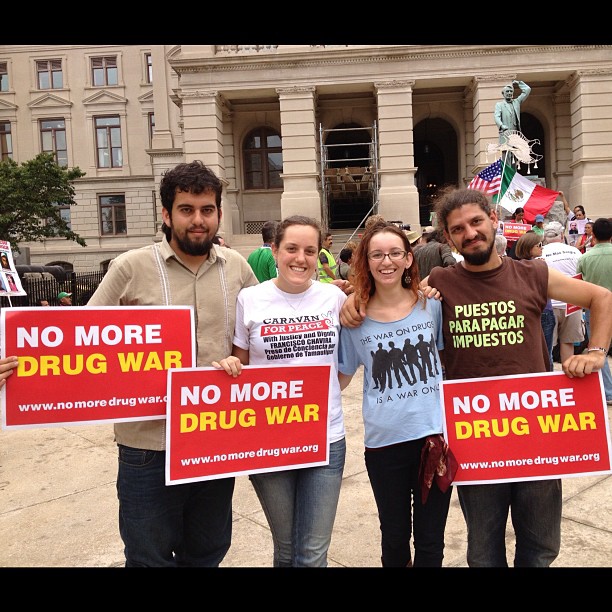 Miguel, Amaya and I are onboard Bus #2 of the Caravan for Peace organized by the Movement for Peace and Justice with Dignity. We are crossing the United States from the west coast to the east coast, going south of the Rio Grande to the Great Lakes area of Chicago, beginning in the August summer in San Diego and ending in the September autumn in Washington DC. The goal of the Caravan is to raise awareness, generate dialogue between victims on both sides of the border, and influence public opinion and the mass media with the message of pain we all carry. The victims tirelessly repeat their testimony, they carry photos of siblings, children, parents, both those recently dead or those missing for decades.  They also carry the voices of the indigenous people and communities who have been exclused and exploited for centuries, and are victims of the violence and suffering that has caused. But the main message is to radically change our way of life, on the most basic level, to show that we can accompany the pain of those who suffer and work although we have never had to live under those conditions. With the voices of victims and victims’ families as the backbone of the Caravan, it was established that the Caravan would try to influence the following five policy issues: – Arms trafficking -Money laundering -Drug policy -Migration -Bi-national security Comprehensive analysis of each of these issues is essential, but by focusing on our main topic (drug policy), we would like to highlight a few points: As noted, the issue of drug policy is a matter of great disagreement. The official position of the Caravan on this issue is “to generate open discussion” and not towards a proposed solution to the many conflicts that revolve around this topic but can be understood differently so that if there is consensus, it is that there is no single solution to solve the drug problem. From a somewhat optimistic perspective, we can consider two advances: To close this post, we would like invite anyone who wants to join us in the next 15 days we have left before arriving in Washington DC on Sept. 10.  Please let us know, there are many things that we would like to talk about, discuss or we would love to continue collaborating (or meeting us in any of the cities in which we stop would be wonderful). Greetings from Houston, Texas Andrés