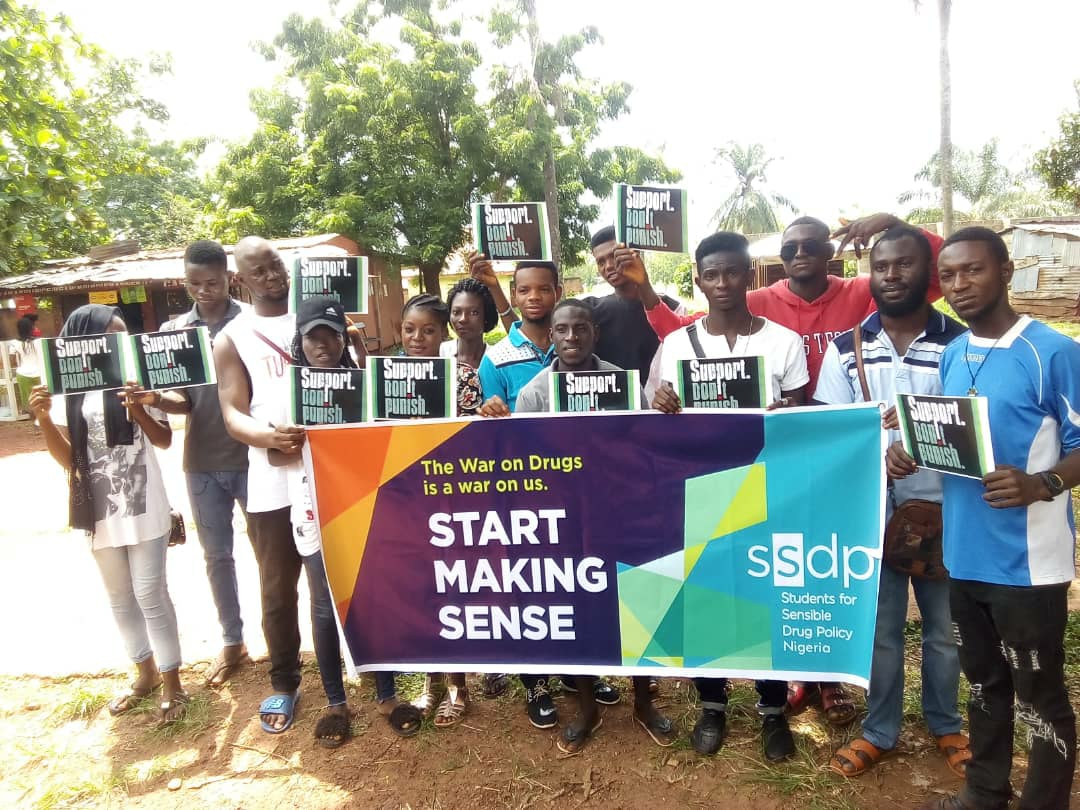 Yesterday, SSDP members in Nigeria, Sierra Leone, Austria, Mexico, Ireland, Liberia, Pakistan, and the United States participated in the annual Support Don’t Punish Global Day of Action. Occurring on the same day as the United Nation’s International Day Against Drug Abuse and Illicit Trafficking, Support Don’t Punish seeks to reclaim the message of the day from prohibitionists by raising awareness of the harms being caused by the War on Drugs. The global campaign aims to promote drug policies that respect human rights and protect public health, to change laws and policies that impede access to harm reduction interventions and other evidence-based services, and to end the criminalization of people who use drugs. Below, check out what SSDP activists did around the world for Support Don’t Punish in 2018.

SSDP members in Nigeria held actions on both Monday, June 25th and on the day of action itself. Events were held in numerous cities across the country: 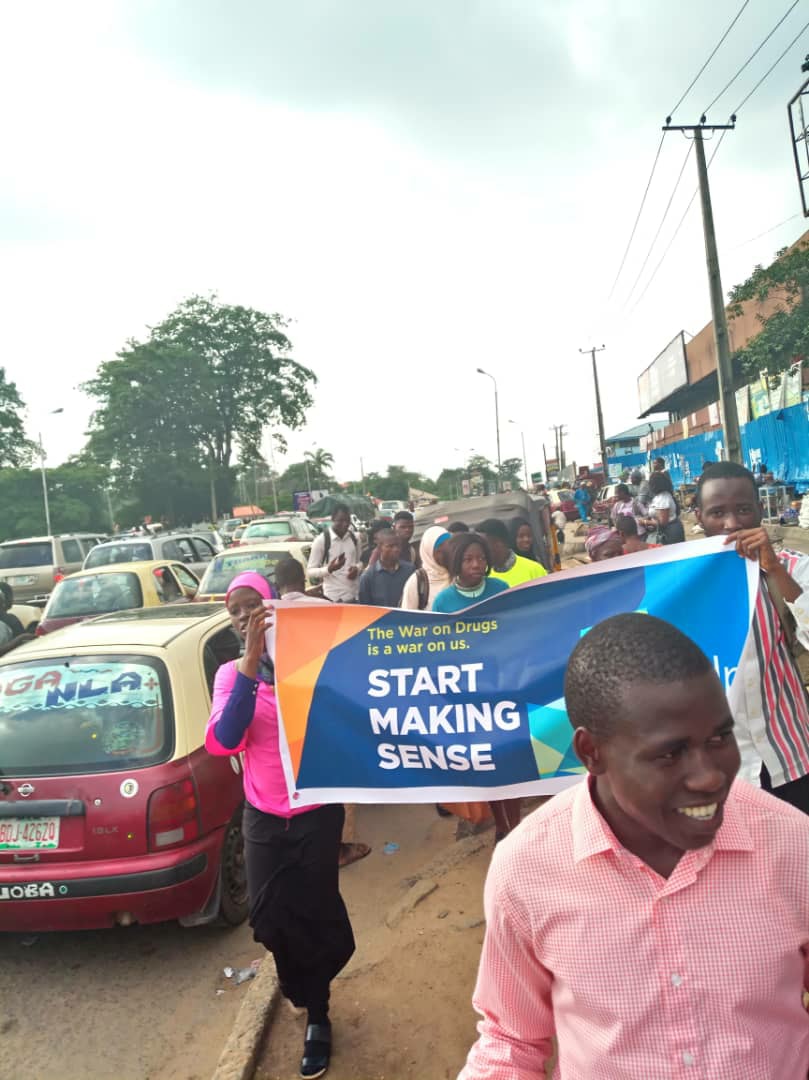 After months of planning, SSDP Sierra Leone had what is being described by stakeholders and attendees as one of the most well-organized discussions on drug policy to ever take place in Sierra Leone. The event consisted of an educational conference and discussion made up of a mix of government officials, young people, lawyers, and people who use drugs. The opportunity to discuss drug policy issues with all stakeholders present was an amazing opportunity for the young people involved, many of whom had never talked with a government official before. Sierra Leone’s Minister of Youth Affairs was in attendance and called for the Support Don’t Punish initiative to be expanded to other areas of the country moving forward. The Minister started off his talk by saying: “I’m happy to be here to celebrate the Support. Don’t Punish 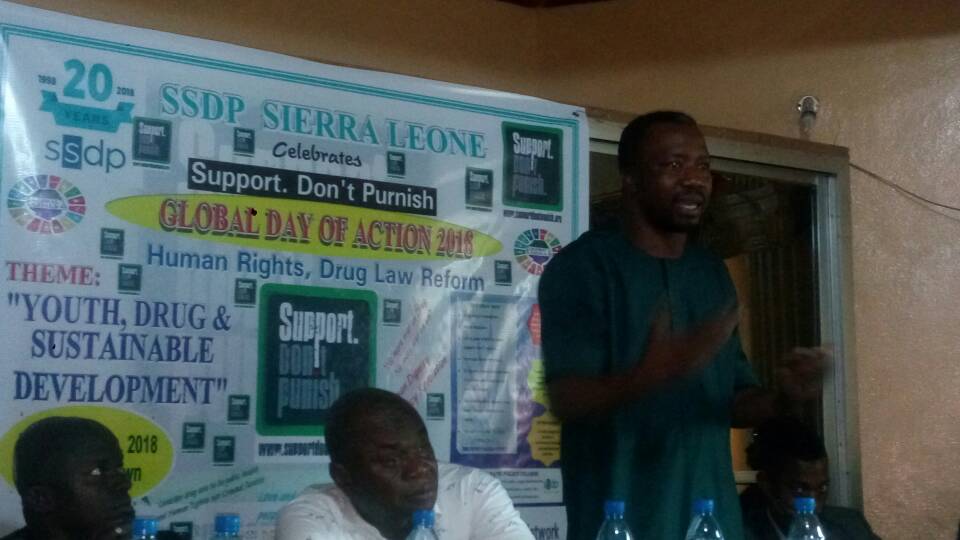 Global Day of Action 2018, with SSDP Sierra Leone and all young persons in the entire country. I’m happy because Ariefa B. Kumara, an influential young man has the mindset to transform lives and make Sierra Leone a better place for all young people including drug users. Honestly, the Support. Don’t Punish Global Day of Action is the most outstanding, popular and successful drug policy program ever organize in Sierra Leone. [sic]” The chapter plans to build on the momentum of the day by continuing to engage in conversations with the Ministry of Youth Affairs and create more opportunities for stakeholders to come together to discuss drug policy reform. 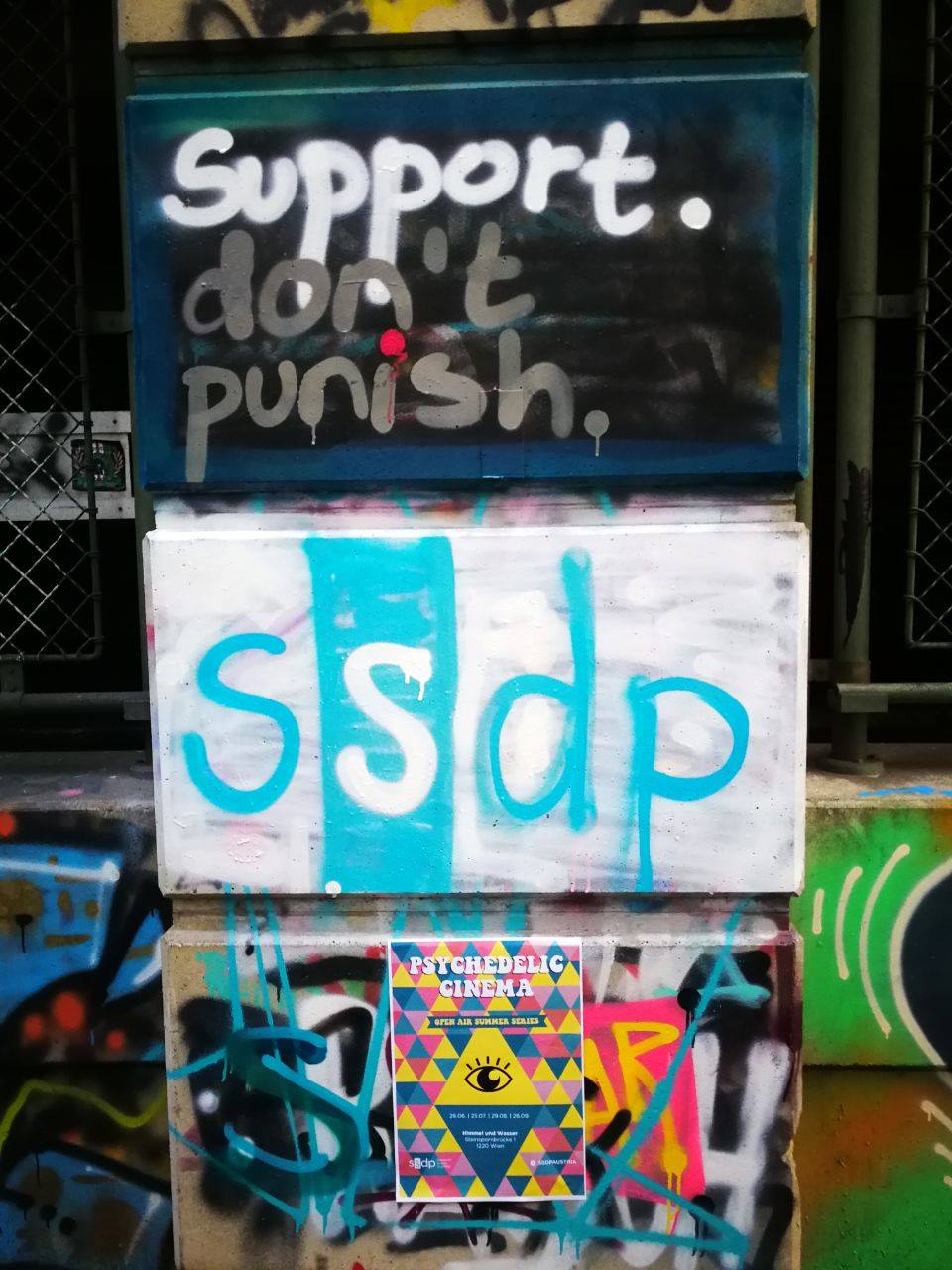 On June 25th, SSDP members attended a CND Intersessional meeting and got to witness Canada introduce their new cannabis legalization policy to the world. Reactions were mixed with countries like Pakistan and Russia trying to reinforce the status quo while New Zealand surprisingly vocalized support for Canada’s new policy. On the evening of June 25th, several members of SSDP Austria took to the streets and tagged Support Don’t Punish & SSDP logos across the various art walls in Vienna. On the day of action itself, members spent the day inside the UN observing the launch of the 2018 World Drug Report, an annual publication of statistics on drug use, trafficking, and production from the last year. 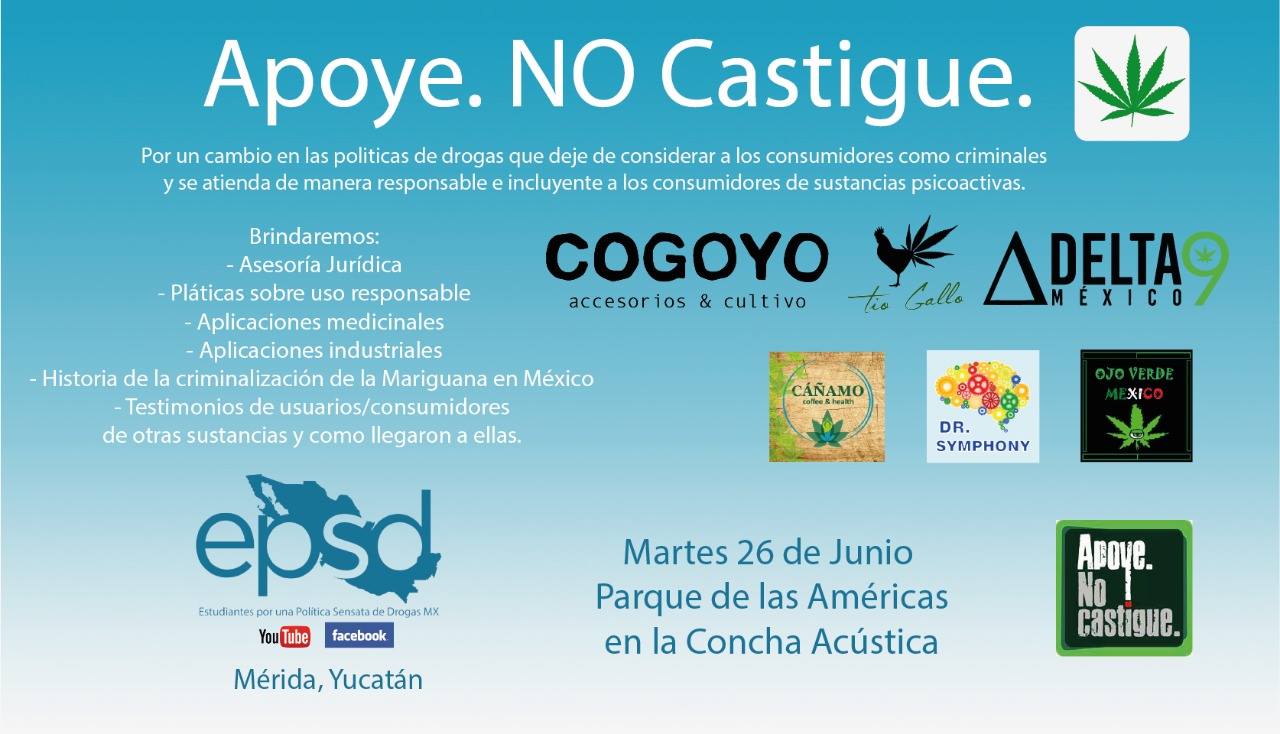 EPSD Mexico held a conference in Mexico City that featured speeches on health policy & drug policy as well as a clinic for harm reduction. Students got the opportunity to hear from experts but also spoke themselves about their experiences fighting back against the drug war with SSDP. The event was packed with many people in attendance. Concurrent events also took place in Guadalajara, Mérida, and Yucátan.

Members of SSDP at United Methodist University participated in the interactive photo project, holding up Support Don’t Punish signs and posting them to social media. The chapter used the social media push to raise awareness about their next chapter meeting occurring the next day.

Several SSDP members from around Ireland teamed up for an outdoor event in Dublin. They interacted with a lot of members of the public and primarily talked about decriminalization of drugs, which is becoming a big issue in Ireland. They got a lot of positive feedback and almost no negative reactions. Students were also joined by members of the Irish socialist party, which recently introduced a cannabis legalization bill. 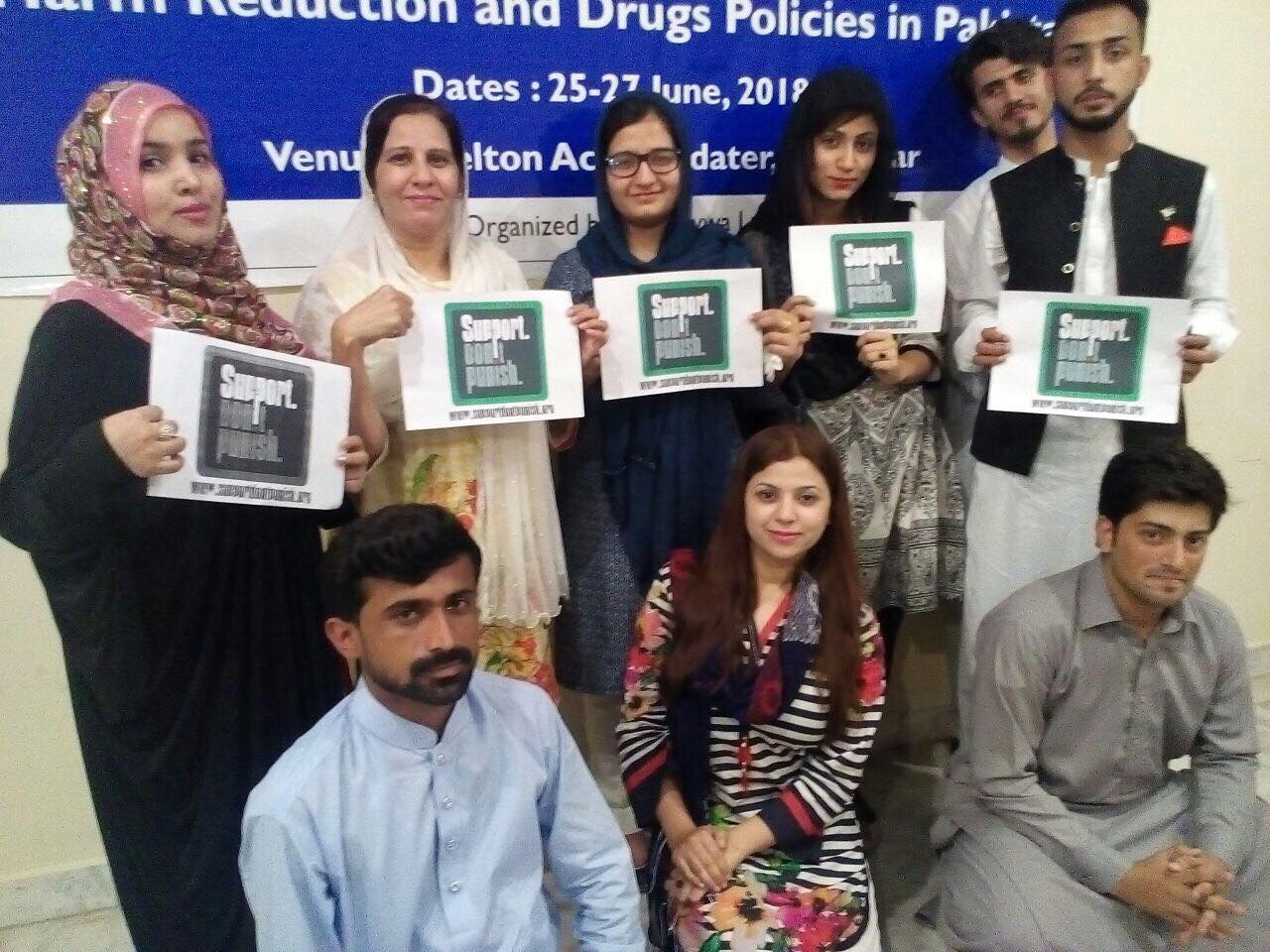 SSDP Pakistan members once again participated in the Day of Action through the interactive photo project. This year they got even more people involved with the campaign, even recruiting some younger students for photos. 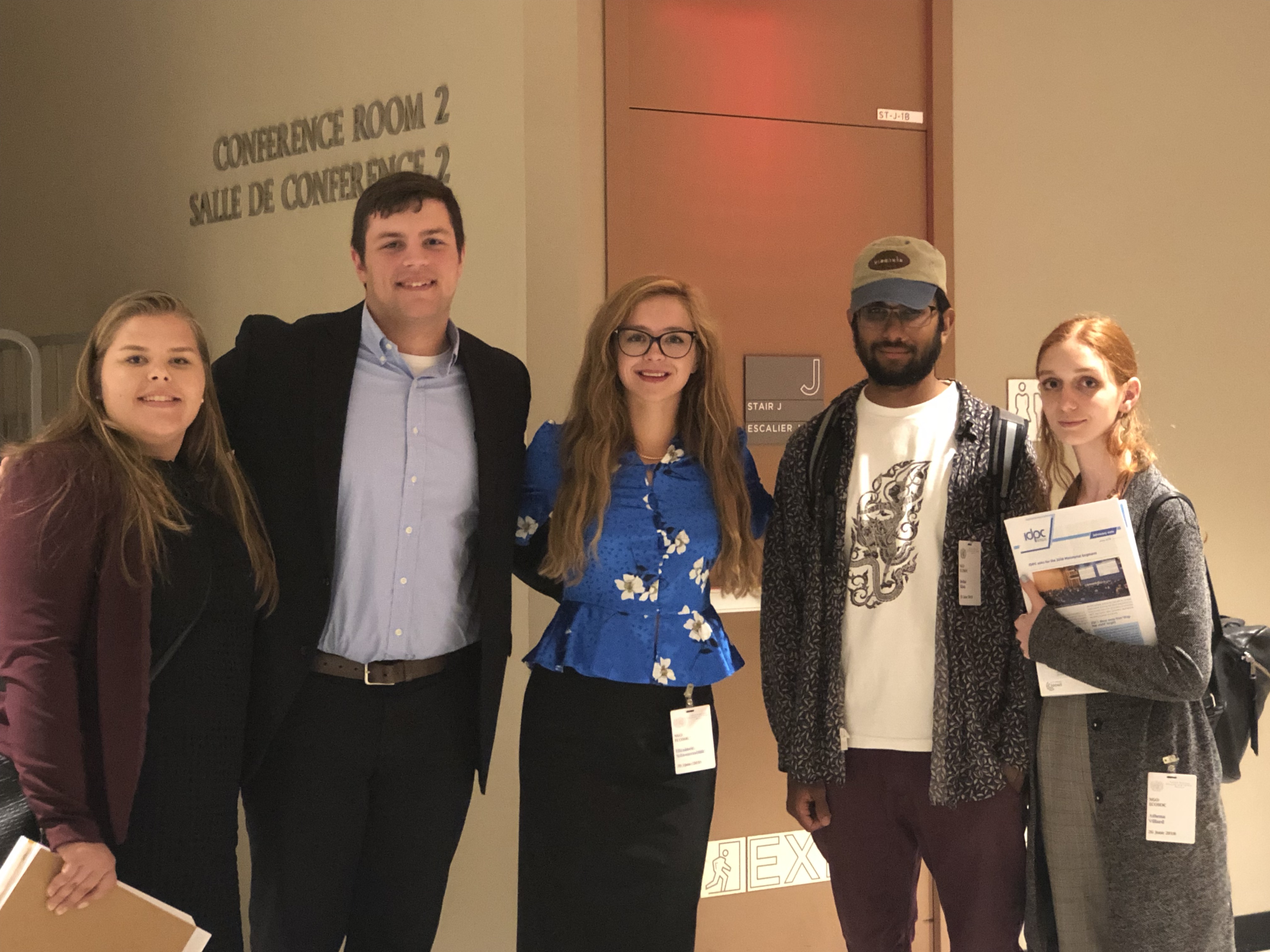 Five SSDP members attended the launch of the World Drug Report in New York City, which happened in conjunction with the launch events in Vienna, Geneva, and Nairobi. Afterward, members of civil society got together outside of the UN for a Support Don’t Punish event that featured some speakers, chants, and photo opportunities.