Written by Sara Velimirovic and Sarah Merrigan, SSDP UNGASS Coordinator Interns Last Friday, SSDPers in the United States and Ireland joined people around the globe for the Support. Don’t Punish. campaign. It was a chance to take our voices to the streets and speak in unison against the global War on Drugs in more than 130 cities around the world. Moreover, this was the first time that multiple cities in the United States participated in this global campaign, outlining our efforts to join the conversation on international drug policy. SSDP helped organize events in Washington DC, New York City, and Denver, Colorado. Our chapters in Ireland organized events in eight towns and cities throughout the country, including the capital city of Dublin.

SSDPers outside of the US State Department, Washington, DC

In Washington, DC, we focused on spreading awareness about funding the United States provides to countries that still use the death penalty for nonviolent drug offenses. Notably, we highlighted the recent case of eight execution victims in Indonesia. Apart from Indonesia, countries like Iran, China, and Vietnam also receive help and training for drug enforcement by the foreign DEA offices. Our chants and messaging, such as “Drug Executions – not with our dollars” brought a lot of attention from the public to our action. “Executing people for nonviolent drug offenses is not acceptable, and the State Department should take steps to ensure that our tax dollars never contribute to this archaic practice,” said Jake Agliata, SSDP Outreach Coordinator. 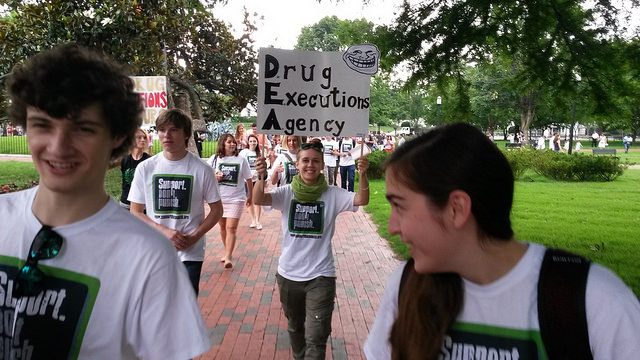 Our protest against this kind of allocation of taxpayer’s money was picked up by the Daily Caller. We were also joined by Chancellor, a cute canine for cannabis, coincidentally born on April 20th this year, who helped us attract the attention of passersby. 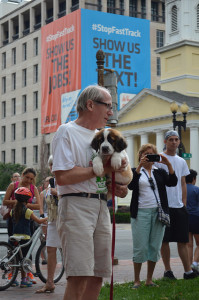 Richard Kennedy, Law Enforcement Against Prohibition, and his canine for cannabis Chancellor

Later in the day, the word spread through DC about the Supreme Court same-sex marriage decision and we decided to join in the celebration on this historic day, seizing the opportunity to inform more people about the negative consequences of the drug war. We marched from the White House to the Supreme Court, making ourselves loud and visible to the people in the streets.   In New York City, a coalition of groups including SSDP, International Drug Policy Consortium, Open Society Foundations, Harm Reduction Coalition, Drug Policy Alliance, and National Advocates for Pregnant Women joined forces outside the United Nations to draw attention to the growing demand to end the War on Drugs. Chants such as, “Addiction is not a crime,” and “Who does the drug war hurt? Women, children, families!” could be heard all over 1st Avenue as the group marched up and down the street, ensuring our message was heard by tourists and New Yorkers alike.   “As the UN General Assembly Special Session on the world drug problem rapidly approaches, this action was an opportunity to ensure the voices of reformers are heard, not just by those who share our belief that the War on Drugs has failed, but also by policymakers, elected officials, and other bureaucrats who play a key role in shaping international drug policy,” said Sarah Merrigan, SSDP UNGASS Coordinator intern.

In Denver, attendees of the National Cannabis Industry Association’s Second Annual Cannabis Business Expo and Summit also participated in the SDP Day of Action by taking part in the global photo campaign (below). 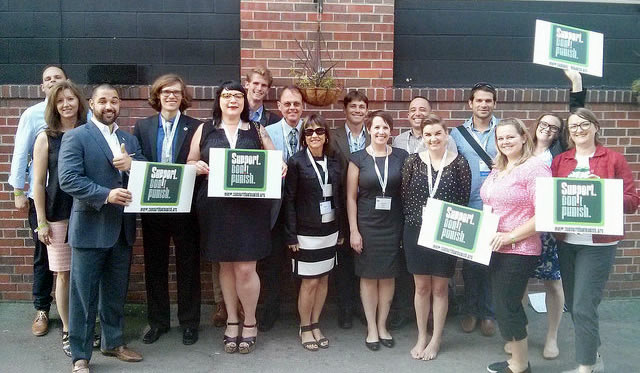 In Ireland, SSDP focused on the issue of MDMA decriminalization and regulation, as well as alternative approaches to treating heroin users. “Ireland has one of the highest rates of heroin use and drug related deaths in Europe,” said Dan Kirby from Dublin City University (Ireland), explaining why it’s important promote needle exchange programs and safe injecting rooms for heroin users because they lead to better results.

One of the most significant impacts is that Ireland’s Minister for Drug Strategy, Aodhán Ó Ríordáin, called for the decriminalization of all drugs and an alternative approach to prohibition during the event in Dublin. This is an incredibly powerful statement by a government official as it directly affects not only the Irish national policy, but also the country’s position in the upcoming UNGASS 2016 conference.   Overall, the participation of SSDP in the Global Day of Action was a resounding success and a fun experience. Finally, here’s one from the team: Support, don’t punish! 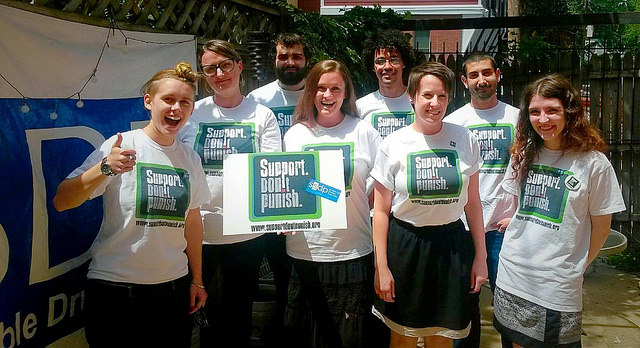