Today, August 31st, is International Overdose Awareness Day. A global event held annually, this day aims to raise awareness about overdose, reduce the stigma of drug-related deaths, and spread the message that the tragedy of overdose is preventable. Events are being held around the world to pass along these messages and tributes to those who have been affected by overdose are being shared to remember family and friends who have passed away as a result of an overdose. 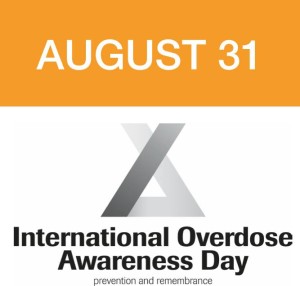 Make this your facebook profile picture today as part of the social media campaign for #OD15.

According to the 2015 World Drug Report, there were an estimated 187,100 drug-related deaths worldwide in 2013, the majority of which were opioid overdoses. This is up from the 183,000 deaths reported in the 2014 World Drug Report. One in five of these deaths were in North America alone, by far the highest drug mortality rate in the world. One of the reasons for this is because reporting on overdose is more accurate in this region than in many others, meaning the real number of overdose deaths worldwide may be much higher than reported.   The good news is that these deaths are preventable, and worldwide more attention is being placed on finding ways to combat the rising rate of overdose deaths. Long-term opioid substitution treatment, such as methadone, has proven to be an effective method in preventing overdose among heavy opioid users. In addition, the availability of Naloxone, an opioid antagonist that can immediately reverse the effects of opioid overdose, is rising in North America. As of June 2015, 39 states and the District of Columbia have naloxone access laws on the books.   This year, several members of the SSDP family would like to share their overdose stories in hopes that doing so will educate others on how we can prevent these tragedies from happening in the future.

What is your story? ¨To understand my story, I must provide context When I was in eighth grade (about 14), I was in my first sexual relationship. I was a bit too young. The first time we had sex, I somehow got my girlfriend pregnant even though I used protection. She was a Mexican Catholic and refused to have an abortion and was adamant about birthing and raising our child. This was the summer before my freshman year of high school. Long story short, she had a miscarriage 5 weeks after conception and she never forgave herself. It was a blessing for me but a source of deep anguish and self hate for her (this experience stills haunts me to this day). Several months pass and we stopped talking, both of us trying to maintain sanity after this traumatic incident. She turned to painkillers to cope. Her friend would tell me that she was snorting it during school in the bathroom. Everyone knew, but never told administrators or any adult. We went to separate schools. One day in late fall one of her best friends texted me and told me what happened. She apparently had been taking oxy 80mg pills, one of the most potent painkillers one can get, and one day got into a fight with her family and ran away. She had taken so many that her sibling found her face down in the street, not breathing. She was taken to a hospital and survived, but suffered a partial brain hemorrhage. She could have easily died. What do you hope people can take away from your story? ¨Public and private schools, (high schools/middle schools) need to focus more on prevention and general education when it comes to hard drugs. Her community knew exactly what she was doing but did not raise any alarm. Instead of making fun of her and stigmatizing her for her clear cries for help, they should have reached out to help her. Perhaps her near fatal overdose would have never happened if her community had not let it come to that, if students were encouraged to report this sort of drug use. Looking back, we generally all did not have any idea how dangerous this drug abuse was. I did not even know that these pills here 80mg, an obscenely strong dose. I believe even just minimal education could have prevented this entire tragedy.¨

What is your story? ¨Overdoses affect many people and their families each year. Ours was rocked on a sunny, glorious day when we found our son. We were expecting to join him to listen to music in the park that afternoon. Instead we found him alone at his home, unconscious where he had overdosed unintentionally on opiates. He had been a recreational user for a few years and was deeply private about this activity. He would mostly inject his drugs, for physical pain relief from an old injury. He was doing this for a number of years before we caught on. One day we’d come across some syringes and this was when it came out that he was injecting. As his parents, we had talked to him about reaching out for formal support but he had reflected on the stigma that would attach even if he was able to get onto an illicit drug substitution program. We recall him talking about the waiting lists at that time for methadone programs. He also didn’t see his situation as warranting formal intervention, but did on our advice talk to a support worker from the needle exchange about safe injecting. When we found him that day we called an ambulance. We know that even this simple act is fraught for people who worry they may get into trouble later for their drug use. We are not sure if our son had any awareness that he was in trouble when he injected himself that last time. We now know that there is a call for naloxone to become more available as a medication to reverse the effects of opiates and particularly important to combat an overdose. Our son had always enjoyed life and liked a few beers with his friends. He’d been out with them the night before we found him. He was in good form. He was also working full time at a skilled job. He was in his thirties and responsible. His death affected a lot of people and even a few years later we notice fresh flowers are put on his grave by some at the time of his anniversary. His loss to us is profound and we think of him all the time.¨ What do you hope people can take away from your story? ¨Too often when we hear about people overdosing our brains instantly conjure up images of junkies or crack whores or scummy, dirty people, images we’ve been fed by the news and by movies. But this stigma is wrong, and it’s harmful. It’s wrong because intravenous drug users can be found in all social circles in society. It’s wrong because it means we’re less likely to want to change the situation for the better if we don’t fully value the lives lost. And it’s wrong because it’s painful enough already when someone loses a son, a daughter, a mother, a father, a best friend, but it’s worse when society says they were bad people and somehow deserved it.¨

What is your story? ¨My mother was someone I hardly knew, yet her attributes of love, compassion, and humor radiate through me today. Divorced from my father at 3, we saw each other on a basis that was minimal at best. She was the type that could light up the room with the crowds pearly whites and a beautiful voice that would leave my ears ringing on those rare visits. Doctor shopping for codeine, failed rehabilitation, suicide attempts, compartmentalize a place in my head for what I can still remember with her struggles with drug misuse. The hardest thing to deal with today is silencing the childhood question about his thirty-nine year old mother, “Why did you have to leave so soon?” What do you hope people can take away from your story? ¨Focus on policy change with drug laws in our country and approach people who struggle with drug misuse with a harm reduction model instead of our current drug policies that founded upon baseless science and anecdotal hearsay rhetoric. Naloxone, Good Samaritan 911 policies, and policies that are grounded in empirical evidence, compassion, accountability, and transparency. Our country needs to snap out of the “domestic psychosis” called the war on drugs and look at other countries that have dealt with these issues. The evidence is contrary.¨

What is your story? ¨For most of my life, I never knew there was anything that could be done when someone overdosed. The closest thing I knew of was a shot of adrenaline to the heart because I had seen Pulp Fiction. As I became more educated about drug policy and harm reduction I learned about Narcan. At the harm reduction center where I volunteer, we train our clients and staff on how to recognize an overdose, administer Narcan to reverse it, and to feel safe calling 911 under the Good Samaritan Law. So many people remain unaware that there is something out there that can save the lives of someone overdosing. Recently, I saw someone overdose on opiates, but with my training was able to assist in the administration of narcan and save the person. Narcan is an incredible resource that should be readily available and accessible to those who may need it. No one should die from an accidental overdose when there are tools available to save them.¨ What do you hope people can take away from your story? ¨I hope people can learn, as I did, that an overdose doesn’t need to be the end of the person’s life. Narcan is out there ready to reverse an overdose. Furthermore, the Good Samaritan Law protects you if you call 911 when someone is overdosing. So many people are afraid to call 911 and lives are lost because people are not properly educated. I hope that narcan and proper overdose education is more readily available and accessible to all drug users as well as friends and family of drug users so no more lives are lost.¨