Written by Emma Tuttleman-Krieger, President of the Tulane University SSDP chapter In the midst of final exams week, SSDP Tulane organized an “Activism Study Break” to help students urge their senators to vote in favor of mandatory minimum sentencing reform like the Smarter Sentencing Act (SSA), S. 1410. Families Against Mandatory Minimums (FAMM) initiated a national call-in day on December 11th which provided short script to call our senators on the U.S. Senate Judiciary Committee and urge them to support SSA. That bill, if passed into law, would benefit thousands of nonviolent federal offenders facing mandatory minimum sentences (including some individuals caught in unfair crack sentencing guidelines who are already in federal prison). The Committee will be voting on SSA at the next Judiciary Committee markup on Thursday, December 19th 2013. Tulane students had a great time calling their senators, but we still can use your help! 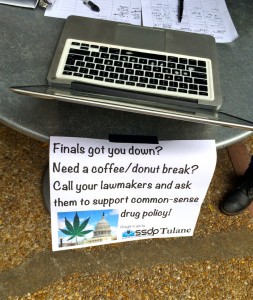 SSDP Tulane members set up a table along a high foot-traffic quad offering free coffee, donuts, and oranges for a little boost of energy and political activism. We had students come up to us who had just got out of their final saying, “I really need a break. What are you guys doing over here?” Once we talked to that person about the Controlled Substances Act that keeps non-violent drug offenders in prison for up to 20 years, voted into law by President Nixon in 1970, most unequivocally agreed with the need to reform federal mandatory minimum sentencing laws. Some students had financial reasons for reform: it’s too expensive to keep someone locked up for years. Some students had personal reasons: they knew someone, a friend or family member, who is a drug user in that state and they want to keep them safe. Some understood that keeping people locked up for a non-violent crime is a human rights offense, especially knowing the traumatizing and inhumane conditions in prison. Whatever their reason, they made a call to their senator asking to them to vote in favor of reforming mandatory minimum sentencing laws.

It felt really good to empower students to make a change they wanted to see in drug policy and sentencing reform.

After they made the call, people felt like they had made a difference. A student who called her senator in Alabama said, “I have never done that before!” With their busy school schedules, many students don’t have the time or knowledge of how to help reform drug sentencing laws. Having FAMM’s script in front of them and our support made it less intimidating for students to call their senators. It felt really good to empower students to make a change they wanted to see in drug policy and sentencing reform. In total, SSDP Tulane helped 21 students to call their Senators’ offices on FAMM’s national call-in day. 9 calls were made to Sen. Dianne Feinstein [D-CA], 4 to Sen. Chuck Schumer [D-NY], 3 to Texas senators Ted Cruz [R] and John Cornyn [R], 1 to Sen. Jeff Flake [R-AZ], 1 to Sen. Richard Blumenthal [D-CT], 1 to Sen. Jeff Sessions [R- AL], asking them to vote for sentencing reform because mandatory minimums are unfair, expensive, and do NOT keep us safe. One call was made to Sen. Richard Durbin [D-IL] and another to Sen. Patrick Leahy [D-VT] thanking them for their support of SSA. The Committee bill markup is scheduled for December 19, 2013 – that means that there is still time to call your Senators! If you live in Alabama, Arizona, California, Connecticut, Delaware, Hawaii, Illinois, Iowa, Minnesota, New York, Rhode Island, South Carolina, Texas, Utah or Vermont, you have a Senator on the U.S. Senate Judiciary Committee. In the same way that the bill markup up doesn’t wait for our finals to be over, you shouldn’t wait to take action on this important sentencing reform! The time to make your voice heard is now. From our efforts at SSDP Tulane, to the dedicated members at FAMM, to your individual call, each and every single one of our voices count in letting our Senators know that we support mandatory minimum sentencing reform like Smarter Sentencing Act, S. 1410.   Thank you for your support and help, and let’s work together to bring about this change!   For more information on how you can get involved and call your senators, visit: http://famm.org/there-is-still-time-to-call-the-u-s-senate-judiciary-committee/   Emma Rose President SSDP Tulane