I am extremely thrilled to announce that SSDP has expanded into Denmark with the establishment of the University of Copenhagen chapter! This pushes SSDP’s global presence to 9 total countries, including the United States, and is our first established chapter in Europe outside of Ireland. I spoke with chapter leader Anders Dahl and the rest of the chapter about their accomplishments so far and what they have planned for the future. How did you hear about SSDP? One of the founders of the Danish chapter carried out an anthropological field study in Los Angeles, California, focusing on moral imaginaries in relation to cannabis as medicine. As a part of that research he came across students involved with SSDP from the University of California, Irvine School of Law chapter. That was the first encounter but there seem to be people involved with drug policy reform in Denmark who already became acquainted with SSDP. Why did you want to get involved/what made you decide to start a chapter? 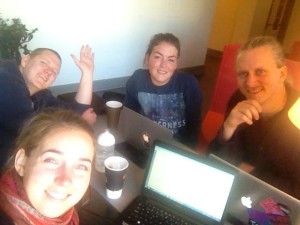 Members of the University of Copenhagen SSDP chapter during their first meeting.

It seemed to be the obvious extension of the field study mentioned before. Besides, the timing is perfect, at least in regards to medical cannabis issues, as a bill will be negotiated in the Danish parliament on the 11th of December this year. However, all of our members are motivated by different aspects of the current policies in regards to controlled substances at large. By mobilizing the apparatus of punishment rather than the apparatus of help/health we as a society fail and bring harm to people. We want to be one of voices speaking against current policy advocatingating for a sounder one. What has the reception been like? It has been surprisingly positive. We got 200 likes on our facebook page within the first 24 hours. Vice Magazine and the national broadcasting company contacted us and some of the organizations already involved with policy reform welcomed us to the debate (they seem exhausted from lifting the burden alone). More importantly students from other schools and faculties want to get involved and have already contacted us. I guess an organization like this is something we have needed in Denmark for a long time. What are some of the things you have planned or want to plan for next semester? We are currently working on a campaign highlighting the benefits of the bill proposed in parliament. The campaign consists of 3-4 films portraying patients who struggle under the current policy. Furthermore we are writing articles focusing on the catch-22 defining scientific research on controlled substances. We will start planning for the next semester after December 11. What is the most challenging part of your experience starting/running the chapter so far? The only problem so far has been to get a formal authorization from the faculty to create this chapter. We do not really seem to be the first priority on their to-do-list. What is the most rewarding part? It is extremely rewarding to work in unison with likeminded people towards the same goal. Many people contacted us showing gratitude and sympathy with our effort, which is rewarding too. Last but not least the overall goals for SSDP strikes us as not only honorable but also necessary. Every step FORward is REward I guess. What are you most excited about for your chapter/school/state/region/ssdp/drug policy right now? Drug policy is a field of many conflicts. It mobilizes all the great political ideologies and there are a lot of contradictory interests at play. We are thrilled about adding another chapter to the history of drug policy in Denmark based on pragmatic approaches. Danish students are a great resource and by providing this platform for students interested in drug related issues we can help them bring life to their efforts not only within the realms of education but outside too. That excites us a lot. It is important to stress the fact that there are already many fantastic things going on in Denmark that other people worked hard to facilitate. One example of that is harm reduction initiatives and treatment for drug addiction. We are truly proud to become a vital contributor to this field.