We have a brand new chapter in Ireland! Pierce Fox, founder and leader of Athlone Institute of Technology (AIT) SSDP, shares his thoughts on his chapter’s history and vision moving forward: Pierce: SSDP is the 3rd chapter to begin in Ireland after University College Cork (UCC) and National University of Ireland Galway (NUIG). I first came across SSDP during a debate on the legalisation of cannabis organised by The Debating Society in the first semester in 2013. During the Q&A some people identified themselves as being from SSDP although I didn’t get a chance to talk to them after. Having looked into it a bit more I decided to get one going in AIT. I made contact with the guys at SSDP Ireland and they helped me understand what I would be doing and how to go about starting up a chapter. I was also in Cork one night over Christmas so I had a chance to meet with a few of them from UCC. AIT was highly supportive of this and I received all the help I could ask for in terms of being recognised as an official society where I could grow a new community of drug policy reformers and educators through student lead activities. From there I began by collaborating with other societies including the Political and Social Change Society who helped organise a talk on drugs with renowned drug policy campaigner Fr. Peter McVerry. We also did some tabling together throughout the year and overall this has been a very long-lasting positive experience for me in college.I’m studying Pharmaceutical Science and I’m entering my second last year, and so far my results are going well. SSDP keeps me busy but being a chapter leader doesn’t completely eat into my time. One of the major benefits of being so involved with SSDP is the new research I find when I do some learning online. The CNN special on Weed featuring Dr. Sanjay Gupta is a great example of this. I know there is more to this plant than is known at the moment including both chemical and industrial economic and social potentials. In terms of the industrial side of hemp there is no doubt in my mind that the laws are at best draconian and we are in dire need of policy reform! Having seen the documentary produced by Channel 4 into Ecstasy and the work produced by the Multidisciplinary Association for Psychedelic Studies (MAPS), I know there are more to these chemicals than the demonisation produced by tabloids and fear-mongering propaganda. 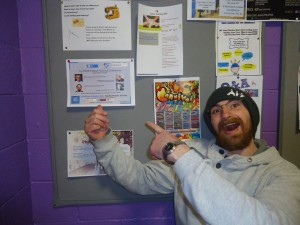 I have volunteered with homeless charities in the past and aim to do so again in the future and from all the people I’ve encountered with drug (including alcohol) problems I think that the criminal system is punishing people who only have a problem with themselves. I strongly believe in Harm Reduction as a way to save lives and as a means to reduce the damage done to society by those experiencing issues. Having worked in a High Support residential unit I cannot say enough as to the benefits of such methods and feel that if people knew the difference there would be better services provided nationally and not just in cities however Dublin City would be a good place to start and I would like to see groups like Anna Liffey be able to provide supervised drug consumption rooms for drug addicts where they could be taken off the streets and be at less risk of becoming infected with HIV and have more opportunities to get their lives back on track.During the Headshop saga, I noticed that more people than ever experimented with drugs. I think this was down to the fact that people naturally want to experiment with other forms of chemicals besides alcohol but may currently be afraid to do so due to the uncertainty caused by a black market. I also think that the chemicals available to the Headshops were disastrous as they had no research to confirm that they were safe for consumption, in fact most were labelled “Not for Human Consumption”. I want there to be proper avenues of research available into these and other chemicals with transparency of methodology so as to inform legislators and the public equally. There are new drugs being developed constantly and as these are all called “Research Chemicals” these mimic known drugs but differ slightly. Nothing is really known about them and they present a true mine field to both the user and society.Next year the plan is to raise awareness of these issues through public seminars and outreach events. We have plans to screen documentaries where we will inviting students and faculty from the college to come to a discussion group afterwards to create a new conversation about drugs in Irish society. I think ideas can be developed and myths can be disproved. I would like for SSDP AIT to link in with other chapters to grow a national SSDP campaign that can coordinate events and put pressure on the USI and the various political parties to help champion the cause. The road is long but without a step it will never get shorter. I am proud to have taken a step in the right direction and I am very happy to call myself a drug policy reformer in todays modern society.