Griffin Salisbury and Pat McGoldrick of Beloit College recently joined our network and I’m very excited to introduce them to you! Read along for more about their process of getting started and moving forward. 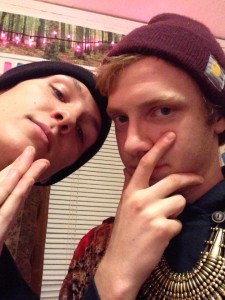 1. How did you hear about SSDP? I was writing a paper on MDMA as a treatment for PTSD. So far, the experiments being done show greater efficacy than any other drug therapy that is being used. When MDMA was first legalized for research in 2002, Dr. George Ricaurte of Johns Hopkins University ran an experiment on ten baboons that ended up killing 2 and severely damaging the others. This finding was highly scrutinized in the scientific community, and it was discovered that Ricaurte did not give the baboons MDMA, but instead an overdose of methamphetamine. He attributed the error to mislabeled vials, and pulled the remaining research papers. Dr. George Ricaurte was receiving $15 million of federal grants for this experiment. In writing this paper I saw how the War on Drugs and most research being done on drug use and abuse is not grounded in science, but is propagated by institutions that profit from prohibition. While writing the paper I became more thoroughly acquainted with MAPS, and found SSDP through their student resources page. 2. Why did you want to get involved/what made you decide to start a chapter? The War on Drugs can be likened to a slow holocaust, with the target being communities of color. In my eyes it is an extension of Jim Crow laws, and a form of population control. Every genocide has a number of steps leading up to it. First is Classification, and the establishment of an “us and them.” This dehumanizes the “other,” such that they are no longer deserving of empathy. This is done with drug addicts and drug dealers, particularly those of color. Look at how the media uses language when talking about killers (“thugs” versus “misunderstood social outcasts”). This is not accidental. Next is Organization, which began during drug prohibition in the 20s, and was solidified when the “War on Drugs” was announced. It was strengthened during the 80s when politicians were lauded for being “tough on crime.” Then comes Expropriation and Concentration. When a person is arrested of a drug crime, they can have their possessions taken away. They can also be incarcerated. Once they are released, they return to their community and stripped of any ability for upward social mobility. Look at the segregation of any city in America. This is not just de facto. The final step is Extermination and Denial. Now more than ever, racialized police violence is in the public eye, but there are still cries (from both sides of the aisle) about “race baiting” and pleas to “not make it about race.” 3. What has the reception been like on campus? From students, teachers, administration, etc. Overall, we’ve had positive feedback from most people on campus. When we introduced this idea to some of the faculty members and explained SSDP’s mission it was met with great support and encouragement. Many students responded enthusiastically, as we started a conversation about this chapter while issues like mass incarceration and the war on drugs were already being discussed on campus and in class. 4. What are some of the things you have planned or want to plan for next semester? – Drug Education for Beloit Students – A forum to discuss the War on Drugs as a political machine – A judgment-free support network for people to find others who have suffered from substance abuse, either personally or indirectly – Discussions on use and abuse, and harm reduction within your community – Guest Speakers – Community Panels – Movie Showings – Political Activism at State and National levels 5. What is the most challenging part of your experience starting/running the chapter so far? A challenge that we faced when discussing starting a chapter with students and faculty was the stigma that seemed to come along with having “drug policy” in our name. This was a big part in motivating us to create an image of our chapter that emanates what SSDP values: diversity, empowerment, and learning. In order to overcome that stigma and create this image, we spread as much information as we could on a variety of issues from incarceration and racial profiling to addiction and harm reduction.   6. What is the most rewarding part? Being recognized by the administration was a huge accomplishment for us. However, the positive feedback and enthusiasm for engagement that we received from faculty members and students was really the driving force behind that. Knowing that your peers will support a movement that you’ve engaged them with gives a sense of solidarity. It is the beginning of the empowerment that we hope to spread to all students, knowing that we have the collective ability to create crucial change. 7. What are you most excited about for your chapter/school/state/region/ssdp/drug policy right now? Wisconsin plays a very large part in the U.S. mass incarceration machine. Being in the state with the highest rate of black male incarceration, we would really like to affect change on state policies with regards to minimum sentencing when drug users are prosecuted. This is nowhere near the ideal, but it is one of many small steps forward. 8. What is your vision for Beloit SSDP? Where do you see your chapter in a year? in 4 or 5 years? We would really like to see our chapter grow in size over the years. That means promoting inclusivity and diversity within our chapter so that a large number of people from a variety of perspectives can share their experiences. This would also allow for some really great collaborations. Working and being involved with other campus organizations like Black Lives Matter Beloit and Better Together (campus group that addresses mass incarceration) is crucial to the mutual success we seek in being part of a student-centered campus community.