I’m thrilled to introduce our newest chapter to the SSDP family: Cork Institute of Technology (CIT) from Ireland! The number of established SSDP chapters in Ireland increases to four with the addition of CIT. I spoke with chapter leader Martin Condon about what his chapter has accomplished so far and what his plans are for the future:

I first heard about SSDP from activist friends who had set up chapters at their colleges. These friends and I worked together in the “Legalise Cannabis Ireland” group. They knew I was attending a college which had no SSDP chapter and filled my head with all the great possibilities offered from setting up a SSDP chapter at CIT.

My friend filled my head with all the great opportunities setting up a chapter offers, such as access to a massive, young and open minded audience, access to fundraising, the ability to get speakers on campus, and so much more. I attended a conference which they were holding in National University of Ireland Galway (NUIG). The conference was put together really well. We heard from a retired police chief constable Tom Lloyd, addiction specialist Dr. Garret McGovern, and other students. After this conference I felt like the student movement is a powerful one that can’t be ignored if we were united through a society like SSDP. After that weekend, I submitted an application to my own college and while this was being considered I helped out my friends with their chapters.

What has the reception been like on campus so far?

So far we have yet to start the college year here in Ireland so reception from the students is still yet to be experienced by myself, but I would imagine we will be very well received and gets lots of new members on society’s day this week (Wednesday 17th of September). I will be starting a degree course titled “Herbal Science” which looks at plant based cosmetics, medicine and nutrition. Again, as I have yet to return to college, I haven’t seen the majority of the courses lecturers but I hope they will be open minded enough to consider some alternative medicines such as cannabis or psilocybin. The reception from the staff in the societies office was funny because at first; when I asked about starting a society they said it was no problem and were very helpful but as soon as the word “DRUG” was used the atmosphere changed a little. The staff member in the office was a little more cautious and started asking a lot of questions such as “what is SSDP? Are we promoting drug use? Why do I want to set up the society?” and a few other questions. I answered all to the best of my ability and the staff seemed satisfied that the society was being set up for education, harm reduction, dangers of prohibition and for a new approach to dealing with drug users as the current heavy handed approach is not working; drug use among Irish teens is the highest in Europe. 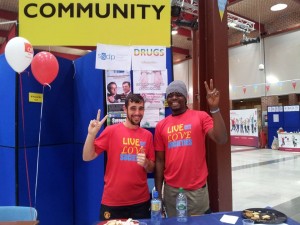 First of all I plan on getting a massive amount of students to sign up on the societies day and to form a great team who I can work with on educating the rest of the student and staff about the risks of prohibition. I will also attend presentations with local groups such as Cork’s Drug Task Force, a committee here in Cork, Ireland made up by local councillors, health service workers, Gardaí (Policemen) and local volunteers. I hope we can get some students onto the committee to attend meetings and offer up some alternative ideas to tackling problematic drug use in Cork city. The college also holds students referendums with which I hope we can pass legalizing cannabis both for medicinal and recreational use, as well as the decriminalization of all drugs. We will also be holding some fun events to help strengthen the bond between SSDP members and for just blowing off a little steam.

So far not much has been going on; we are still in the very early days of the society here in CIT. Society’s Day is in two days and that is going to be the biggest challenge faced yet. Being a lone soldier in the chapter is making thing a little more challenging as I am organising the whole day myself but I’m sure a lot of chapters have started in a similar way before. It’s not going to be an impossible task. I have taken some helpful resources that I found on the SSDP website such as posters and flyers which made things a little less challenging. Also, I have some signup sheets ready and plan on having some goody bags to give out to students who sign up.

What is the most rewarding part? What are you most excited about right now?

The most rewarding part for me is making new friends who have similar views to mine. Another great reward is the added benefit to my job prospects thanks to the skills generated in the running of a society. Running a society allows you to sharpen your management skills such as communicating, organising, planning and so many more.

Currently I am really excited about the national tour being organised here in Ireland by a number of students from different colleges around Ireland (Galway, Athlone, Dublin, and Cork). The tour is going to take the “Prince of Pot” Marc Emery, his wife Jodie, and also Dr. João Goulão to a number of colleges here in Ireland where they will speak to an audience made up of students, media and local politicians.

Marc Emery is a cannabis activist who was extradited from Canada to America for the sale of cannabis seeds. Marc spent four and a half long years inside prison most of which was served in Yazoo city prison, Mississippi. His wife Jodie will also be paying us a visit she is currently seeking to run as a liberal in the next federal election.

Dr. João Goulão is Portugal’s ex minister for health and the current drug policy co coordinator. Currently in Portugal all drugs are decriminalised and the treat the issue of drug use as a health issue rather than a criminal issue. Since adopting this new approach Portugal have benefitted in lower crime rate and lower number of people with illness from dirty needles like HIV or Hepatitis C. This allows the Portuguese police force to work more efficiently and it has also reduced the burden on hospitals with fewer new cases of HIV.

I am also really excited to have SSDP chapters spread across Ireland, engaging people in their communities to rethink our approach to drugs. Having a large number of students getting behind a group like SSDP would give us a voice that should be listened too; after all we (the students) are the policy makers of tomorrow.

What is your vision for CIT SSDP? Where do you see your chapter in a year? In 4 or 5 years?

I envision CIT SSDP, along with the other SSDP chapters in Ireland, getting more effective drug policies in place. To get to that we will work together to remove the taboo around the topic of drugs by holding debates and conferences like the one mentioned above, which is titled “Decriminalising Drugs: International Insights with Marc Emery & Dr.  João Goulão”.

In 4 – 5 years time I hope SSDP chapters will have spread to all the colleges in Ireland. For the CIT society, I might still be here as I have another four years left on a Herbal Science Degree. It would be great by then if we have influenced a change in policies. If and when we do, I hope the society stays in place to help continually improve the policies as needed.