I am very excited to introduce our newest established chapter at DePaul University in Chicago! With the addition of DePaul, SSDP now has seven active chapters in the Chicago metropolitan area! DePaul SSDP chapter President Vila Ahmeti has been working hard all summer, and has some very thoughtful responses to some questions I asked that I’d like to share with all of you.   How did you hear about SSDP?  After learning more about harm reduction and drug policy with the help of DePaul SSDP’s advisor Greg Scott, Greg let us know about SSDP—an organization we hadn’t heard of before—and suggested we start a chapter at DePaul. I was intrigued and began to look into SSDP and I loved what I found!   Why did you want to get involved/what made you decide to start a chapter? As I learned more about our nation’s drug policy and the War on Drugs, the injustices that were exposed to me were hard to forget. I decided to start a chapter at DePaul because wanted to raise awareness of the societal and economic effects of prohibitive and punitive drug policies and because I wanted to be a part of changing those policies. Our society often marginalizes drug users and I wanted to speak out and be a voice for those who have been silenced. 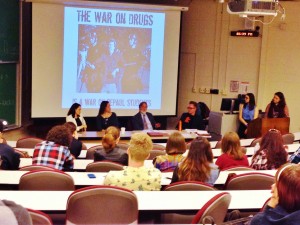 What has the reception been like on campus so far? There was an initial concern over our organization from DePaul the administration. But once we clarified our mission and our goals, the reception was overwhelmingly positive! SSDP has a way of finding its way into my conversations with students and DePaul faculty and everyone has been very supportive so far. I have noticed that most students respond well when I talk about SSDP and our plans at DePaul and they show a desire to want to get involved. SSDP is such a relevant and important organization to have on our campus, especially considering the urban setting we are in, and this relevance is echoed in the support our organization has received.   What are some of the things you have planned or want to plan for next semester? We are a very new organization at DePaul. We had some very successful events this past year, and we really want to strive for more consistency this quarter. One of our main goals is to begin to have regular meetings and build up our membership beyond our social circles. Our first full quarter as an officially recognized student organization on campus will consist of building momentum among students by introducing them to SSDP. We are also planning on sending a group of students to the National SSDP conference in D.C. this September!! 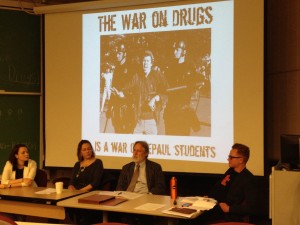 Another shot from “The War on Drugs is a War on DePaul Students.” Three DePaul professors and a DePaul staff member were featured on this panel. From left to right: Vilmarie Narloch, Suzanne Carlberg-Racich, Noel Barker, Greg Scott

What has been the most challenging part of your experience starting/running the chapter so far?  The most challenging part of starting our chapter has been getting the word out about SSDP the entire student body. We started a Facebook page and posted our events on different social networks as well as we put up posters about our events. We talked to as many people as we could about SSDP, but most of our marketing was done over the Internet or in print. As we enter the new school year, we have already confirmed our spot in DePaul’s Involvement Fair where we look forward interact with potential members one-on-one in a more personal way.   What has been the most rewarding part? Last year we had a panel event that focused on how the war on drugs impacts students where we invited four DePaul faculty and staff members to speak. After the event, one of my friends came up to me and said they’d expected the event to be boring but that the material we covered was thought-provoking and interesting. This was amazing to hear and it was unbelievably motivating to see our event inspire passion in others. This panel event—our first big event—was well-attended and well-received, so that was definitely rewarding. 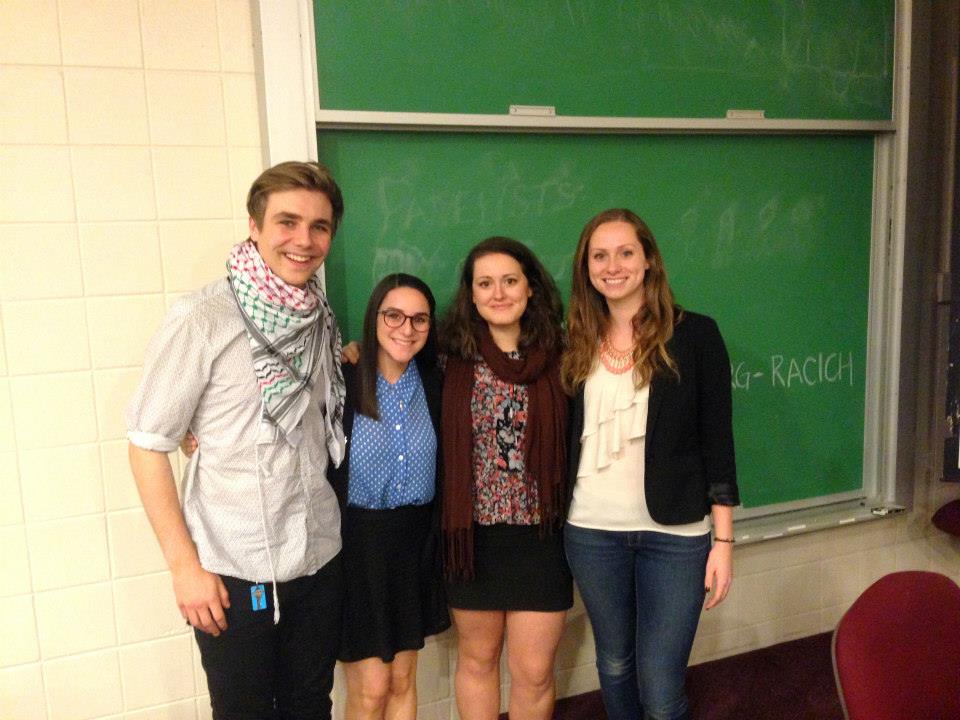 What are you most excited about right now? I’m most excited for our chapter to grow. I can’t wait to get to the Involvement fair and really let DePaul students know about SSDP and our plans for the upcoming school year. I love the idea of contributing to a thoughtful community of motivated persons at DePaul using SSDP as a catalyst. I think the strength of an organization comes from its members and I’m really excited for our membership to grow this upcoming year. I also love the fact that there are so many other SSDP chapters in the area and I’m very excited to continue collaborating with the other Illinois chapters at Northwestern, Roosevelt, University of Illinois – Chicago, Loyola, Frances Parker HS, and University of Chicago.   What is your vision for DePaul SSDP? Where do you see your chapter in a year? in 4 or 5 years? My vision for DePaul’s SSDP chapter is to bring together a group of motivated individuals who care for one another and who actuvely express that care towards those impacted by our country’s punitive prosecution system and drug policy. This could be by having conversations about the Drug War and drug policy and/or by becoming an active force against our prohibitive drug policy. In a year, I see DePaul SSDP having a strong membership, with a general understanding of local and national drug policies, holding consistent meetings as events. I see the momentum towards reforming our nation’s drug policy becoming a growing conversation at DePaul. In 4-5 years, I hope to see DePaul SSDP’s political participation and engagement increasing as the focus evolves from learning about our drug policies to making a commitment to changing it. I see DePaul students showing comprehensive awareness about drug safety and overdose protection services by having access to Naloxone and being knowledgeable of the 911 Good Samaritan Policy at DePaul in the state of Illinois. In 4-5 years, I envision a local partnership between Chicago and SSDP chapters strengthening as we join forces to stop the injustices we see as a result of our nation’s drug policies.