Please join us in welcoming our newest official chapter, Florida Gulf Coast University (FGCU)! Based in Fort Myers, Florida, the chapter first got started in early July of this year. I worked with chapter founder and President, Jessel Serrano, over the summer and by the time school was back in session, Jessel and his team had hit the ground running. Shortly after the school year started, the group earned official student organization status from FGCU. I spoke with Jessel about his experience so far and his vision for the chapter in the future:   How did you first hear about SSDP? I first heard about SSDP in a Civil Asset Forfeiture article written by SSDP’s Amplify Project. What made you want to get involved in the drug policy reform movement? I decided to get involved because I believe the Drug War is nonsensical. It is costly, unsustainable, and ruins human lives, especially the lives of people who essentially did nothing wrong. I have personally seen it negatively impact the lives of those around me in my community and at my school. How has the reception on campus been so far? At first, people have been hesitant to declare their position on the drug war or even openly discuss the subject. But when we talked to them one-on-one, the vast majority are for the policies that SSDP espouses. 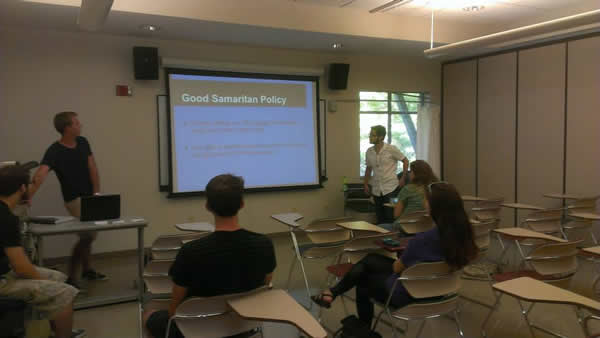 What are some events and campaigns you have planned for your chapter? We want to enact a campus-wide Good Samaritan Policy at FGCU, table on campus to inform people about Florida’s Medical Marijuana Petition and gather signatures. This coming spring we plan to host the documentary Code of the West on campus. What is the most challenging part of your experience founding and/or running the chapter so far?  The most challenging of part of running a chapter, thus far, is reaching out to people about the message and goals of Students for Sensible Drug Policy. A lot of people, at first, seem very cautious about joining the organization. As this challenge is overcome though, we are seeing people open up incredibly to what we are trying to achieve. What is the most rewarding part? The most rewarding part is educating people about the “war on drugs” in general. Many people still do not know that this war is raging within the United States and that it involves everybody, not just drug offenders and law enforcement. What are you most excited about for your chapter right now? I am most excited about the possibility of a Good Samaritan Policy on campus. I am also excited about getting Medical Marijuana on the ballot for 2014 so that Florida residents have a democratic chance to vote for this sensible reform. What is your vision for FGCU SSDP? What do you see your chapter accomplishing in the future? My vision for FGCU SSDP is to see a more educated student body that is both aware of the drug war policies and active in changing them. In a year, I would like to see our campus enact a Good Samaritan Policy, and in four years time, I would like to have built up this club to leave an enduring legacy beyond my time spent at this university and for it to continue to work for positive change in drug policy.   FGCU students: find out how to join in this chapter!